Future of Hagia Sophia to Be Decided on July 2

Source: Orthodox Times
According to a front-page article in the Turkish newspaper Yeni Şafak the decision on the future of Agia Sofia is expected to be made on July 2.
Pravmir.com team | 09 June 2020 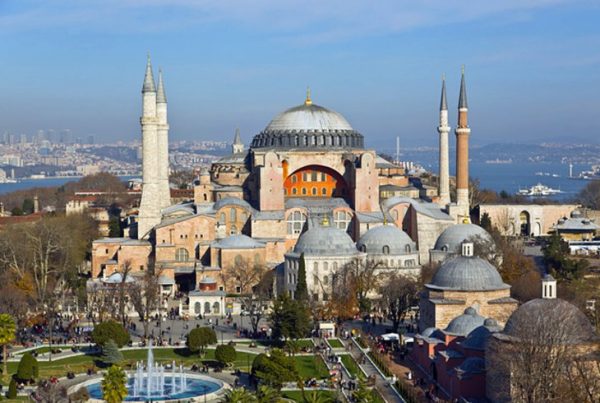 In particular, according to the Turkish newspaper, the Association for the Support of Ancient Monuments and the Environment has filed a petition with the Supreme Court to examine whether the 1934 decree on the conversion Hagia Sophia bearing Kemal Ataturk’s signature was genuine or forged.

Hurriyet: Erdoğan orders change in the status of Hagia Sophia

In addition, the newspaper Hurriyet raised the matter of the conversion of Hagia Sophia into a mosque a few days ago, emphasising that the Turkish president had ordered a change in the status of the Hagia Sophia Museum.

“Both prayer and the verse of the Conquest from the Quran can be read inside Hagia Sophia. Our nation must decide on this. Hagia Sophia can continue to receive tourists as a mosque. Like the Blue Mosque. Special sensitivity is required in this matter. Do some research on Hagia Sophia, look at it and we will talk about it,” the Turkish president allegedly said to his party’s Central Committee on Wednesday, although he stressed that “there is no need to rush, first we have to explore the matter.”

According to Hurriyet, Recep Tayyip Erdoğan proposed that Hagia Sophia be officially designated a mosque, but at the same time retain the status of a museum, so that it can be visited by tourists, like the Blue Mosque opposite Hagia Sophia, which was turned into a museum in 1934.

In a second article, signed by the well-known journalist for his presidential sources, Abdulkadir Selvi, Hurriyet confirms that Erdoğan is “warmly” approaching the operation of Hagia Sophia as a mosque.