US Supreme Court rules all states must recognize same-sex marriage

Source: CatholicCulture.org
Natalya Mihailova | 27 June 2015
In a sweeping historic decision released on June 26, the US Supreme Court has ruled that the Fourteenth amendment to the US Constitution requires all states to grant legal recognition to same-sex marriages. 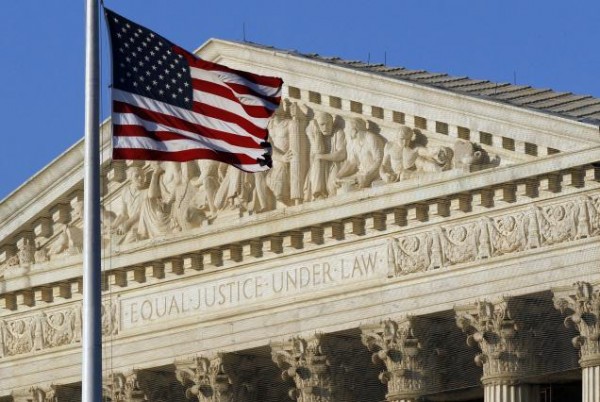 By a 5-4 vote, the Supreme Court justices settled the case of Obergefell v. Hodges by issuing a new legal definition of marriage, and overturning the laws of all the states that currently do not issue marriage licenses to same-sex couples.

Wriing for the majority, Justice Anthony Kennedy argued that the Constitution “does not permit the state to bar same-sex couples from marriage on the same terms as accorded to couples of the opposite sex.”

Claiming that the institution of marriage has “evolved over time,” Justice Kennedy wrote that the essence of the marital bond is a sharing of intimacy, which does not require partners of opposite sexes. He argued that the plaintiffs in the Obergefell case were not undermining the institution of marriage, but showing their respect for that institution by seeking to participate in it. The majority opinion reasoned that the ability to marry would help to stabilize same-sex unions, and benefit the children raised by homosexual partners.

Justice Kennedy explicitly rejected the notion that marriage is intrinsically oriented to procreation, writing: “An ability, desire, or promise to procreate is not and has not been a prerequisite for a valid marriage in any state.”

The majority opinion said that religious bodies would retain the right to argue that “same-sex marriage should not be condoned.” The First Amendment, Justice Kennedy wrote, “ensures that religious organizations and persons are given proper protection” for such expressions of belief.

In a strong dissent, Chief Justice John Roberts said that the majority decision was “deeply disheartening.” Saying that the question of marriage should properly be left to state legislators, and ultimately to the people, he wrote: “Under Constitution, judges have power to say what the law is, not what it should be.”

The Chief Justice questioned whether the Obergefell decision would leave religious bodies free to argue against same-sex marriage. He observed that the majority opinion acknowledged the right of churches to “advocate” against homosexuality. He continued: “The First Amendment guarantees, however, the freedom to “exercise” religion. Ominously, that is not a word the majority uses.”

In a separate, blistering dissent, Justice Antonin Scalia referred to the majority decision as a “judicial Putsch” and “this Court’s threat to American democracy.” Justice Scalia said that by redefining marriage, the Supreme Court “robs the People of the most important liberty they asserted in the Declaration of Independence and won in the Revolution of 1776: the freedom to govern themselves.”

Openly mocking the argument of the majority opinion, Justice Scalia said that there was no warrant in the Constitution for the Court’s finding. He wrote: “When the Fourteenth Amendment was ratified in 1868, every State limited marriage to one man and one woman, and no one doubted the constitutionality of doing so.”