We Must Quit (Not Seek) the Winning Team 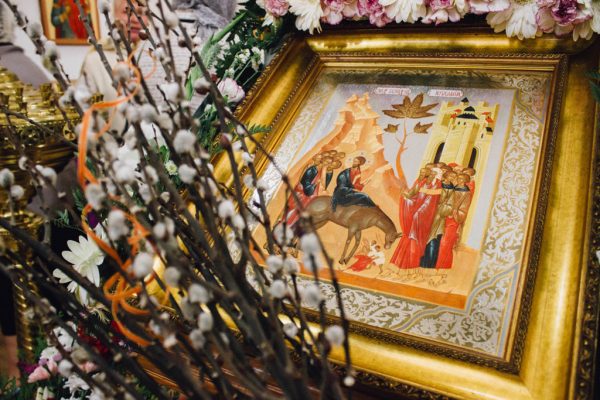 There is nothing like being on the winning team.

We all like to be on the winning team.

That is what attracted the crowds, the day Jesus Christ entered Jerusalem, on the day we call Palm Sunday.

Most of us have heard the story, many times — Christ enters the Holy City, seated on a foal, as the crowds wave branches to welcome Him as king of Israel. They thought He was going to lead a revolt, and overthrow the Roman Empire.

The Church Fathers point out the real reason that got them there, however. It’s mentioned five times in the Gospel — five times when we read about Palm Sunday in the Bible. Most of the time, we miss it.

But Saint Athanasius doesn’t miss it. He tells us, the crowd were there for one reason: because they heard that Jesus raised Lazarus from the dead. Saint John Chrysostom tells us that Lazarus is mentioned as sitting at the dinner table with Christ, just to remind us that yes, he was indeed raised from the dead — and yes, he’s still alive.

Saint Cyril of Alexandria tells us that the Jewish leaders were so worried about the mobs of people who had left the synagogues and begun to follow Christ because He raised Lazarus, they were now working on plans to kill Lazarus — to erase him. To remove any evidence of this amazing miracle, which was destroying the membership of the synagogues in Jerusalem.

But there is good news for those leaders. They didn’t need to go after Lazarus.

Those crowds of people who were crying out, “Blessed is he who comes in the name of the Lord!”, would in just a few days be shouting something quite different.

Most of them would be shouting, “Crucify Him!”

The mobs of people who followed the Lord into Jerusalem on Palm Sunday (some of them were even baptized) had no root to their spiritual life. Most of the time, they played around with spiritual ideas. Now, on this big occasion, they decided to turn out and join the crowd, to show their enthusiasm for Jesus, the King of the Jews.

That didn’t mean that they prayed each day.

It didn’t mean that following Christ influenced their decisions on anything.

It didn’t mean that they were really any different from any of the other pagans around them.

A few days after that Palm Sunday, a great crisis fell upon Jerusalem, and it affected everyone — no one could escape that crisis.

That crisis was the arrest – and the crucifixion – of the Lord..

There is nothing like a crisis to divide the wheat from the chaff – the real thing from the fake.

And brothers and sisters, the Church Fathers tell us, there are a lot of fakes out there.

There is nothing like a crisis to bring out those in the Church who say that the real value of Christianity is to care for the sick and the poor – just like Judas said – because that is always going to be something the authorities will like to hear.

It’s much easier that hearing about the power of God, risen from the dead, to transform sinful human souls from the inside, where you can’t see them.

There were lots of “practical people” in the mob that greeted the Lord with cheers as He entered Jerusalem on that Palm Sunday. But when faced with a crisis of hard times, they fell away.

We do not remember them as saints of the Church.

We do not remember them as Christians.

We do not remember them at all – they left Christ, and they never returned.

Many people have said that in the weeks and months ahead, after the current crisis we are now in has ended, after our churches are allowed to open again, that we will see a great influx of people coming back to church.

But I wonder about that.

Saint Paul writes, the things which you have learned, and received, and heard, and see in me, do. (Philippians 4:9) In other words, follow God’s example – every day, not when it’s exciting, not just when you are panicked – and God will help.

Are people in our crisis today repenting before God?

Are they moved, from their hearts, to pray every day?

How about our Orthodox people, who want their churches open for Holy Week, but many of whom do not make use of them when they are open?

Brothers and sisters, we love to be on the winning team.

But the secret of spiritual victory – victory of the soul, victory in the Kingdom of God – is that you have to show up for all the training, for all the practices, for all the times that are going to shape you into a Christian.

Or else the world will shape you into the mob.

It is almost impossible to enter the Kingdom of God if you’ve been preparing all your life to live for the world.

But it is easy to enter the Kingdom of God if you’ve been training for it all along.