Palm Sunday: Victory of the Heart

Source: Synaxis: A Blog St. Vladimir’s Orthodox Theological Seminary
And today Jesus Christ enters into the Jerusalem of our hearts to lead us to victory. Today, Christ fills us with his power, his strength, and his resolve to overcome the temptation to worldly power.
Priest J. Sergius Halvorsen | 05 April 2015 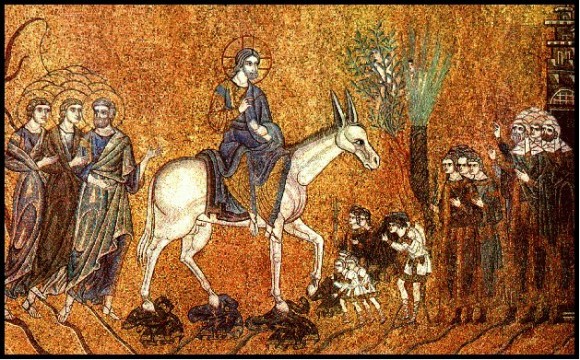 Blessed is he who comes in the name of the Lord.

Today Jesus enters into Jerusalem, and the cheering crowds greet him like a king entering the city after a military victory—the first-century equivalent of a “ticker tape parade.” The crowds have heard about Jesus, about his powerful teaching and his miracles, specifically raising Lazarus from the dead. They cry out “Hosanna in the highest,” a shout of praise and a plea for salvation. “Save us, Lord!” For years, for generations, these people have languished under the heavy boot of Roman occupation and oppression. They are weary of high taxes, soldiers in their streets, and the constant threat of violence. The people are tired and weary and hungry, and they want freedom.

Do you ever feel this way?

The obvious answer is to go out and fight for it. This was what the crowds in Jerusalem wanted from Jesus as he traveled on that “red carpet” of palm branches and the clothes off their backs (Mark 11:8). In their eyes, Jesus was the perfect leader for a righteous rebellion. Surely God’s Anointed One could raise up an army and restore the Kingdom of Israel. After all, if Jesus had the power to raise Lazarus from the dead, he would be invincible in the face of Roman legions. If Jesus was truly God’s anointed one, then he would be invincible in battle. The crowds wanted the kind of freedom that you win with the spear, the chariot, and the sword.

But to win this kind of freedom you need wealth, strength, and power. They sound awfully good, don’t they? With money, a strong body, and political influence, freedom is yours for the taking. Or is it? Ancient Israel had great power, but fell to the Babylonians. In Jesus’ time the Roman Empire had great power, but over the centuries that empire fell to other nations. As one nation rises, other nations fight to gain supremacy. The same is true for people. Today one person might be wealthy, strong, and have all the power in the world. But one who gains worldly power quickly becomes a target for everyone who wants a place at the top of the food chain.

And so, strength, wealth, and power come with a terrible price. They come with a price of fear, isolation, and anxiety. The more you possess of this world, the more this world will try to take away. So we prepare for battle, we harden our defenses and sharpen our attacks. Whether we attack others with swords or words, with bullets or in business, we strike others where they are weakest, where we can do the greatest amount of damage and gain the greatest advantage. The crowd was hungry for power, and they hoped that Jesus would lead them to victory in an epic battle that would change their world.

On a certain level, the crowd was right. They were at the threshold of a great battle that would change everything—a battle that would grant freedom to the oppressed, and vanquish the foe. However, the army that Jesus came to fight was not flesh and blood; it was, as St. Paul says, a battle against the “spiritual hosts of wickedness in the heavenly places.” (Eph 6:12) However, this battle had begun long before Jesus entered into Jerusalem.

After Jesus was baptized in the Jordan River, he went out into the wilderness and fasted for forty days. After that long fast, the tempter comes and tempts Jesus.

“You are hungry? If you are the Son of God, command those stones to become loaves of bread,” says the evil one. This is not merely a temptation about food. Satan is tempting Jesus with wealth. If Jesus were to turn stones into bread, he would never go hungry. And if one were to possess an unlimited supply of bread, he could have virtually unlimited wealth. But Jesus launches a counterattack and replies, “It is written, ‘Man shall not live by bread alone, but by every word that proceeds from the mouth of God.’” (Matt 4:4)

Then the tempter takes Jesus to the holy city, sets him on the top of the Temple, and says, “If you are the Son of God, throw yourself down; for it is written, ‘He will give his angels charge of you,’ and ‘On their hands they will bear you up, lest you strike your foot against a stone.’” (Matt 4:6) Satan tempts Jesus with strength, with physical invincibility. “If you are really the Son of God, then you can do anything you like, even jump off a cliff, and you’ll be fine.” According to this demonic logic, not only could Jesus perform superhuman feats, but he also would be physically invulnerable. He could literally live forever, doing anything he pleased in this world. The spiritual battle becomes more intense, and Christ replies, “Again it is written, ‘You shall not tempt the Lord your God.’” (Matt 4:7)

Finally, Satan takes Jesus up to the top of a high mountain, shows him all of the kingdoms of the world, points out all the glory of all those kingdoms, and he says, “All these I will give you, if you will fall down and worship me.” (Matt 4:9) It is the ultimate offer of power. What would it be like to rule over the entire world, over all its kingdoms and all its peoples, and have access to all its wealth and all its pleasures? At some level, Jesus must have known that all of this could be his: perfect strength, infinite wealth, and limitless power. Yet, he strikes a powerful blow against the powers of wickedness in his reply: “Begone, Satan! For it is written, ‘You shall worship the Lord your God and him only shall you serve.’” (Matt 4:10)

As Jesus enters Jerusalem, he faces these temptations as never before—all of those people cheering, crying out “Hosanna!,” just begging him to be their worldly general, their commander, their emperor. Yet, Christ refuses to be the earthly king that the people demand. Instead he will be revealed as a kind of king that the world has never seen, a perfect king, a heavenly king, a humble king, crowned with thorns, robed in the purple of mockery, and enthroned on the Cross. Though Christ enters Jerusalem and is enveloped in a firestorm of temptation, he keeps his eyes on the Cross. This is the victory of Palm Sunday.

And today Jesus Christ enters into the Jerusalem of our hearts to lead us to victory. Today, Christ fills us with his power, his strength, and his resolve to overcome the temptation to worldly power. For “the Son of man came not to be served but to serve, and to give his life as a ransom for many.” (Matt 20:28)

Today we cry out “Hosanna in the highest!,” for Christ vanquishes the powers of evil, and through his perfect sacrifice on the Cross we are liberated from the oppressive desire for worldly power. Christ leads us to the unexpected victory in which the King lays down his own life for the salvation of all. In dying, the true majesty and power of the Lord is perfectly revealed and the powers of hell are vanquished. Following Christ, we lay down our lives as he did: for our brothers and sisters, our neighbor, and even our enemy. Today we cry out “Hosanna in the highest!” as we follow our Lord to his voluntary passion and death on the Cross.

Fr. J. Sergius Halvorsen (SVOTS ’96) is Associate Professor of Homiletics and Rhetoric at St. Vladimir’s Seminary. He completed his doctoral dissertation at Drew University in 2002. From 2000 to 2011 he taught at Holy Apostles College and Seminary in Cromwell Connecticut, where he also served as Director of Distance Learning. He was ordained to the priesthood in February 2004 and is attached at Christ the Savior Church in Southbury, Connecticut. He and his wife, Dina, reside in Connecticut with their children Thomas, Timothy, and Mary. 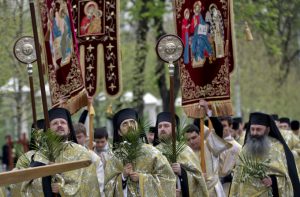 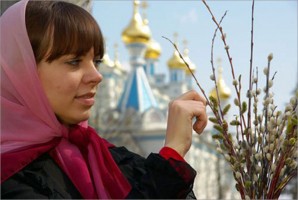 Now we worry about a piece of bread, about a roof over our heads, about our…