Source: Orthodox England events' blog
But today it is the whole Western world that has joined the Nazis. Some will say that peace-loving Russia is at fault. If in the 1990s it had stood up to the Western invasion and genocide in Yugoslavia, then today there would have been peace in a Non-Yugoslavized Ukraine. But in the 1990s decadent Russia was under the jackboot of a pro-Western regime and not free.
Archpriest Andrew Phillips | 15 July 2014 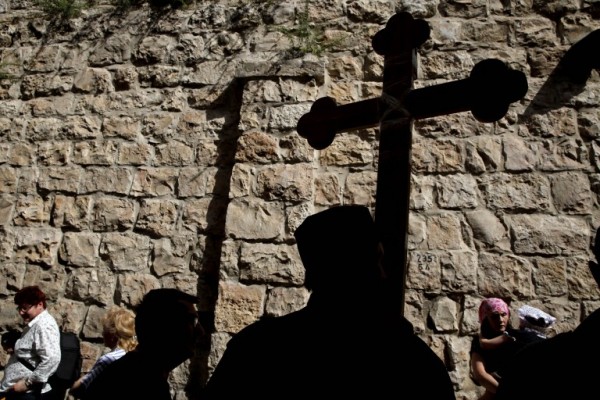 We see crucifixions in Syria and decapitations in Iraq, where the Iraqi-Syrian caliphate has been created by Western meddling – for the only ever weapons of mass destruction in Iraq were those taken there by the genocidal Western forces sent by Bush and Blair. In Israel the US-subsidized genocide of the Palestinians – an eye for an eye and a tooth for a tooth – continues, only Nazi-style, with 100 eyes for one eye, 100 teeth for one tooth.

Then there is the Taliban restoration in Afghanistan, made inevitable by the departure of Soviet forces a generation ago, then there are the murderous Islamist fanatics in Nigeria, the bombing of ancient Nubian Christians in Sudan, the Western-sponsored caliphates in Libya and Saudi Arabia and the persecution of Christians in Malaysia and Indonesia….

All these events are little reported and even deliberately ignored by the Western media and the sodomized Western world as a whole. For they have nothing but contempt for Christians and are in any case too frightened of their self-created Islamic minorities, 5%-10% of Western Europe now, and of their oil-rich paymasters in Saudi Arabia and Qatar.

However, even less reported and indeed deliberately ignored by the Western media, is the use of poison gas and phosphorus bombs in the Ukraine, as criminals are released from prisons and employed by the CIA-installed Nazi junta in Kiev to murder their own civilian population during and since their recent pseudo-ceasefire.

Armed and financed by the US and Galician Uniats, the criminals sent from Kiev, together with Western mercenaries and Western ‘Special Forces’ (i.e. trained killers) have slaughtered thousands, creating the worst refugee problem in Europe since 1945. And all this in order to implement the ‘plan’ of the Californian ‘think tank’ RAND Corporation for the destruction and then colonization of the third-worldized Ukraine, sowing it with GM crops and using it as a dumping-ground for Western nuclear waste and unwanted immigrants.

Above all, what the Western world does not want to admit is that all the present troubles are the beginning of Armageddon, of World War III, and that this War, just like the previous two World Wars, has been started by the sheer imperialist greed of the Western world. Only this time, unlike the previous two times, the whole of the West is united, not divided as before, against Christian civilization, and is fighting on the side of Antichrist.

100 years ago it was the Germanic world that began the First World War and again 75 years ago it was that same world. But today it is the whole Western world that has joined the Nazis. Some will say that peace-loving Russia is at fault. If in the 1990s it had stood up to the Western invasion and genocide in Yugoslavia, then today there would have been peace in a Non-Yugoslavized Ukraine. But in the 1990s decadent Russia was under the jackboot of a pro-Western regime and not free.

The time is coming when we, the last Christians in the West, all of us Orthodox, whatever our nationality, will have to make plans to take refuge in our only earthly spiritual homeland, in Orthodox Russia, from the Western Antichrist. We now ask the Russian authorities to issue us with Russian passports. Only the prayers of us, the people of God, for our own repentance and for the restoration of Russia as the Orthodox Sovereign Power, the last bastion of Christianity left in the world, can now delay the coming of Antichrist, Who is so eagerly supported by all the Western elites. Western peoples, awake – it is now or never!