Where Did Our Time Go? Typewriters and the Disappearance of Time

Today we must ask, as Christians who claim to hold to the ancient practices of the Church, how many of us rise (or more likely, simply stay awake) for the sake of prayer at night? One of the most common complaints priests will hear from the faithful is a lack of prayer: a lack of time in the business of the day, because of the increasing demands of work.
Archpriest Geoffrey Korz | 14 July 2011

“Whoso keepeth the commandment shall feel no evil thing: and a wise man’s heart discerneth both time and judgment.” Ecclesiastes 8:5

If you are old enough to remember using a manual typewriter, you are also old enough to appreciate the convenience of not having to use one today.

For those who never had the pleasure of using one, or who have forgotten the experience, one must call to mind a turtle-paced crawl toward perfection, demanding attention to each letter and space, since to erase even one letter (not to mention an entire line) was a labour in itself. The process was comparably slow, the parameters of line and letter spacing unforgiving, and the final result limited to a single original copy.

All this does not even address the noise created by a manual typewriter. The days of the manual typewriter were self-limiting in terms of work hours: because of the noise they produced, even the most assiduous writer would have to eventually call it a night, or face the wrath of a sleepless family.

I recall my father once having to finish some work on our manual typewriter. Working late into the night, he first moved to a remote room of the house, then closed all the doors. Unable to save our family from the unrelenting ratcheting noise of the machine, he hid himself away in the most remote corner of the basement, and re-aligned his tiny office in order to close the perpetually-open door (his office was and still is a converted coal cellar, an early provider of relief from Canadian winters).

In the morning, when our family made our way to the kitchen for breakfast, we found dad’s work piled high on the table, unfinished. He had given up – or had been forced to give up, as the unending clacking of the manual typewriter refused to give way to the peace of evening for which his family and neighbours longed. After all, it was ten o’clock – and that’s time for sleeping.

The natural limits of time and season, as defined by God’s created world, began to erode with the advent of candles and indoor heating. Gaslight, then electric light, extended the boundaries of civilized waking hours well beyond dusk. Television and other unlimited forms of personal entertainment presented a hundred excuses for putting off the hour of sleep well past midnight – and we became more and more tired. 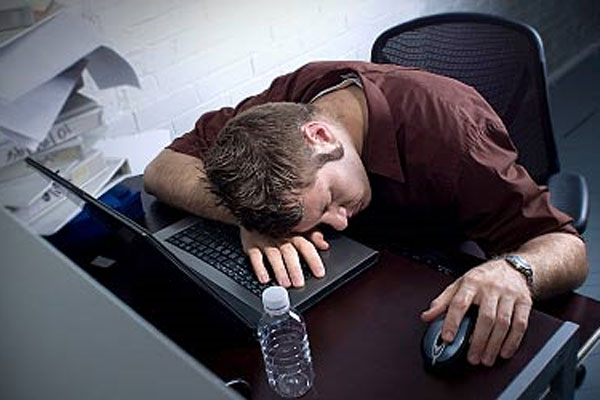 The services of the early Church speak of rising in the middle of the night for prayer: “With my soul I have desired Thee in the night, Yea, by my spirit within me I will seek Thee early” (Is. 26:9, Fifth Ode of Matins). Today we must ask, as Christians who claim to hold to the ancient practices of the Church, how many of us rise (or more likely, simply stay awake) for the sake of prayer at night? One of the most common complaints priests will hear from the faithful is a lack of prayer: a lack of time in the business of the day, because of the increasing demands of work. This is one of the reasons the Church Fathers speak of the nighttime as the time for prayer. Yet it is this time which has now often lost its silence, and has been invaded by the same mundane tasks that fill up our moments during the day.

If such tasks satisfied us, the fact that we spend more and more time on them should fill us with great joy. Yet this is not the case. As diagnoses of depression grow (some estimates say as many as forty percent of Christians suffer from clinical depression), we must ask not simply how we have lost the wisdom of the lifestyle of the saints, but more directly, are we happy with the lives we lead?

Workaholism is a lie, inspired by the Protestant work ethic that promised that those who worked hard would be blessed with God by prosperity. In our time, it is a secularized lie, which no longer offers the false promise of eternal life through hard work, but instead suggests that we can gain heaven on earth if we just work harder, even late into the night. The late Father John Romanides tells us that our knowledge of the things of God does not require fancy theories: it is evident through experience. Our experience of workaholism (and restlessness) provides its own witness to life without God: a life full of short-temperedness, a lack of concentration, and a general lack of joy.

The logical consequence of it all is evident: the erosion of true family life, the disappearance of friendship and personal time, and the allocation of the spiritual life to a cubby hole.