Yelena Popovic, director of the film about St. Nektarios: An Orthodox Christian can offer a lot to the world 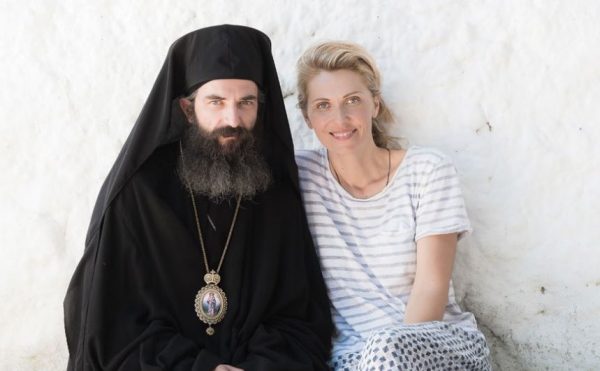 Yelena Popovic, writer and director of “Man of God”, the film about St. Nektarios’s life,  offered Basilica News Agency an exclusive interview in which she speaks of the value of Orthodoxy and of God’s presence in her life and in the life of the film’s collaborators.

The movie was made in cooperation with the Vatopaidi Monastery of the Holy Mount Athos and it will soon be in cinemas, as a homage paid to the saint one hundred years after his passage to eternal life.

Basilica.ro: What should we learn from the movie? What have you learned from making it?

Yelena Popovic: I hope that this film inspires people and gives them the courage to go through difficult moments in life. Individually everyone can learn something from the lives of Saints.

Making this film was a great inspiration and great difficulty. Difficulty and obstacles were overcome by firm faith that if God is Willing, things always work out at the end.

Basilica.ro: Did those involved in the project have moments when they thought the saint intervened for them while working on this film? What was the most difficult about the project?

Yelena Popovic: Many people felt that Saint Nektarios brought them onto the project and touched their lives. There were some that started working on this project merely because of the film making and as time went by they decided to invite Christ into their lives and go to Church.

Basilica.ro: How was Mickey Rourke during the shooting? How was his encounter with Orthodoxy?

Yelena Popovic: Mickey Rourke approached playing the role with his whole heart and I am very touched and grateful for that. Mickey is a religious man. He is Roman Catholic. I took him to Saint Nektarios Church in Kamariza and he was very moved.

He said that was the most beautiful church he had ever seen and that going to that Church was the most important thing he did since he came to Greece.

Basilica.ro: Your meeting with St Nektarios’ story happened in Belgrade. Do you think it was just a coincidence? The filming also coincided with your return to Europe. Could this project about the beauty of Orthodoxy also mean a return to Serbia, your homeland?

Yelena Popovic: I bought a book about Saint Nektarios in Belgrade while visiting and after reading his story I felt very strongly that this has to be a film.

I am sure that it wasn’t just a coincidence as I had a very strong feeling to embark on such a journey.

I have been living in Greece, Athens for the past four years which enabled me to visit Belgrade more often. I love living in Greece but the same way I never planned on leaving the US and relocating to Europe, I cannot predict where will I be in the future.

Basilica.ro: Your becoming a mother coincided with your return to the Church. How did you feel when you gave birth to your son and what “strengths” has motherhood given you?

Yelena Popovic: I have always believed in God and I have always felt a strong connection with Him. The first time I learned about Jesus was from some American friends in the U.S. I simply fell in love with Him.

After giving birth to my son I decided to go to Serbian Orthodox Church where I was baptized a couple of years before that.

I had my first confession and my first Communion then. After my first Holy Communion I experienced a presence of grace that lasted almost six hours. The rest was history.

Being a mother is an amazing experience. I am close to my children and I hope that I will always be a positive support in their life.

Yelena Popovic: I experienced the strongest feeling of God’s presence in some of my darkest moments. It’s something that I often contemplate on. Those moments of bliss that shined through the darkness of hopelessness are calling to me.

Basilica.ro: You said that the world of fashion was dark. Could you elaborate on the dangers for one’s conscience? What advice do you have for young girls and women working in this industry?

Yelena Popovic: The world is dark without love, compassion, without God in our heart. The world of fashion is filled with so many things that can easily destroy and damage a person’s [physical] health, mental health and soul.

Beautiful girls in modelling business are often faced with so many challenges. They are forced to be unhealthy skinny, they are constantly chased and often degraded by men who’s intentions are not Holy. What I have said is not a secret.

All I can say to beautiful girls wishing to be in the fashion industry is to make their education a priority and to do fashion on the side.

To become a successful model is not contingent on how beautiful you are. It’s mainly based on luck.

One can meet a lot of interesting people while doing fashion and since the longevity of a carrier is very short one should have a wise approach to it.

Orthodox Christians have preserved Christianity in sweat and blood

Basilica.ro: Do you think East-Europeans have something precious to give to the West from the intimacy they have always had with Orthodoxy?

Yelena Popovic: Ironically, I discovered Orthodoxy in the West. An honest Orthodox Christian whose heart is in the right place can offer a lot anywhere he/she goes. Some say that Orthodoxy is the best-kept secret.

Of course, for us, [people from the] Balkans or Eastern Europeans, Orthodoxy is in our blood.

Even if some claim they are not religious they do have Orthodoxy in their heart.

We, the Orthodox Christians, have preserved Christianity, many times in sweat and blood. So I think we have already offered more than precious things.

Basilica.ro: You said, from your experience, that the women from Eastern Europe are represented in a degrading way in the movies. Why do you think this happens? It is just a stereotype?

Yelena Popovic: Unfortunately, in the Western world that seems to be a stereotype. I do not believe there is a good or valid explanation for it. It is more of prejudice in my opinion.

Basilica.ro: Many Eastern-European women are being trafficked into the West, according to statistics. What message do you have for young women from this part of the world who want to migrate and make it in the West, sometimes placing themselves in danger?

Yelena Popovic: When I hear a word trafficking I think of someone who is being taken somewhere against their will. That is a terrible thing but unfortunately it happens. Children are being trafficked around the world. May God help anyone who falls victim to such evil. To the young women who would like to migrate to the west all I can say is please do not put yourself in danger.

There is no need to do that. There is always a way to make things happen without getting into trouble. Do not take the path that looks easy, take the right path and accept to struggle with integrity and God will help you to achieve your goals.

Yelena Popovic (43) left Serbia for the USA when she was only 16 and she lived for a long time in Los Angeles. She left the city as soon as she felt she was surrounded by spiritual ugliness.

“I would just stand in the middle of the street and look up at the billboards. And there was not one billboard that wasn’t displaying darkness, violence, things that are very negative,” she recounted in a video interview.

„Man of God” is produced by Simeon Entertainment and View Master Films, in cooperation with the Vatopaidi Monastery in the Holy Mount Athos. It will be distributed in cinemas by Feelgood Entertainment starting from December 3.