Film on Orthodoxy in Pakistan to Come out in Moscow 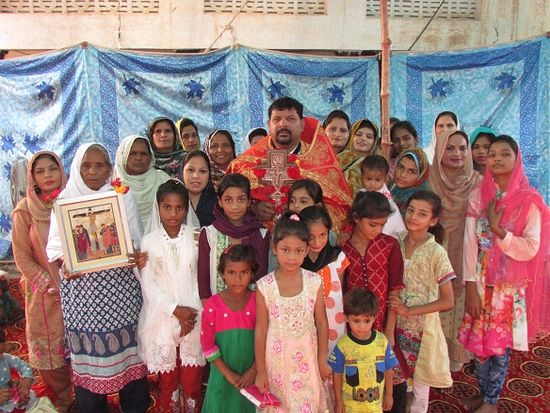 A new documentary film on the Orthodox Church in Pakistan will premiere in Moscow on November 1. Prominently featured in the film is Fr. Joseph Farooq.

The film by Leonid Savin, “Punjabi Cross,” dedicated to the first community of the Russian Orthodox Church in Pakistan, was shot this year in the city of Sargodha, Punjab, Pakistan. In it, Fr. Joseph tells about the history of the Archangel Michael Mission and the structure and activities of St. Matrona of Moscow Center.

Orthodox Pakistani parishioners also talk about local life, how they became Orthodox, and about their attitude towards Russia.

View the trailer below (in Russian):

Fr. Joseph is the sole priest of the Russian Orthodox Church in Pakistan. He has been working tirelessly to bring the light of Orthodoxy to the oppressed Christians of his native land since even before the establishment of the St. Michael the Archangel Mission in 2011. His path is not an easy one—poverty, discrimination against all Christians in a rigidly Moslem society, and isolation from other Orthodox countries are some of the challenges he faces continually in his endeavors to bring his people to the One, Holy, Catholic, and Apostolic Church. But the humility and zeal of his flock inspires him to carry on with the great commission in Pakistan.

The St. Matrona Center opened in October 2017 and aims to The center’s goals are to enable the women to learn to read and write; to teach them about Orthodox Tradition and prayers and family values, helping them to remain steadfast in their faith in the Islamic state of Pakistan; to teach them teamwork, for solving real life problems; to teach further skills such as sewing, embroidery, and handicrafts; and to foster confidence, trust, and determination to help them deal with the difficulties and hardships of their daily lives. Upon successful completion of the one-year training course, the women will each receive a sewing machine.

The film will be premiered at the Russian Diaspora House in Moscow. The event will be attended by the creator of the film, Leonid Savid, and Aaron Samuel, the youth coordinator of the Orthodox community in Sargodha.

For more information on Orthodoxy in Pakistan, see our interview with Fr. Joseph: “The Orthodox mission in Pakistan is growing day by day.”