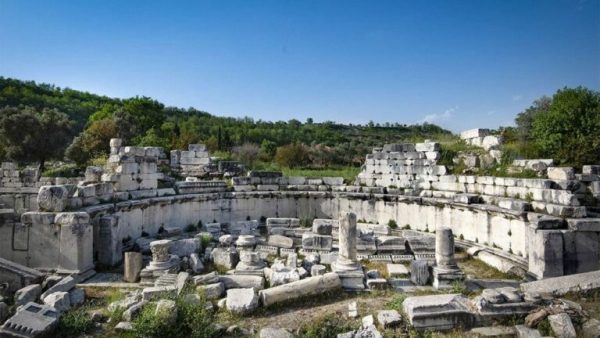 A 1550-year-old Byzantine church’s base ground was unearthed as part of excavation efforts in the ancient city of Stratonikeia in Karia, in Mugla province in Turkey, reports the Orthodox Times.

The area has been added to the UNESCO World Heritage Temporary List since 2015 and archaeologists have described it as one of the largest marble cities in the world.

As reported by capital.gr, Bilal Sogut, the head of the Stratonikeia excavations, said that the ancient city – also known as the city of gladiators – maintained its importance in the Hellenistic, Roman, Byzantine, Ottoman, and Turkish periods.

Sogut said the excavation team reached the church which was built after an earthquake in 365 AD. He added also that the church remained to the first quarter of the 7th century. Later, the area was used as a cemetery. He said that they carried out most of the excavations in the area called West Street of the city, adding, “Here, a church was built on the colonnaded street. Later, when the church was destroyed, the area was turned into a cemetery in the Byzantine period, in the 7th century AD.” He underlined that the team is working on the field where both tombs and the church were located, noting, “Currently, we are restoring the floor coverings of the church.” He also noted that at least four different marble colors were used for the church’s floor, adding that 62 graves have been located in the area so far.

Stratonikeia was first studied in the 18th century. The ancient city has been known since the 17th century, when travelers of the time had visited the area, locating the ruins and inscriptions. In 1743 R. Pococke described the theater, the bouleuterion, and the imposing entrance of the city. The earliest depictions of the monuments of Stratonikeia were published by Choiseul-Gouffier and Chandler. A topographic plan of the city with the visible monuments of the era and the identification of public buildings was presented in 1863.

Almost a century later the bouleuterion was systematically studied for the first time, while in 1977 the site under the direction of Y. Boysal began to be excavated. The excavations revealed the most important buildings of the city and gave a picture of its topography, but quite vague and fragmentary. Excavations have not been completed and the lack of knowledge of the ancient city is supplemented by indirect sources, such as inscriptions and descriptions of the ancient writers. The findings of the excavations are kept, and some are exhibited, in the Museums of Constantinople, Alikarnassos, Milas, and Mugla. A small local museum has been organized at the archeological site of Stratonikeia.