Source: Basilica.ro
An ancient icon was recently unearthed during archaeological excavations at a Moldovan fort originally built by St. Stephen the Great in the 15th century.
Mihail Mere-Albe | 19 July 2019 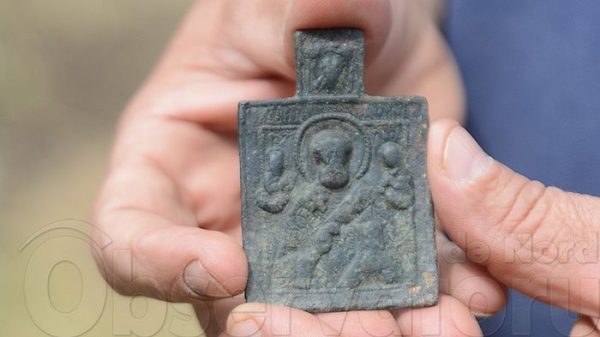 A team of students from the History and Geography Department of the Ion Creangă Pedagogical State University in Chişinău discovered a 16th-century bronze icon of St. Nicholas the Wonderworker while searching for traces of the great ditch that surrounded the fortress and to identify the underground constructions within the perimeter of the fortress.

Fragments of several other objects from various time periods were also found during the excavations, undertaken as part of a 3-week practicum of the Department of History.

The original wooden Soroca Fortress was built by the Moldavian prince St. Stephen the Great in 1499.

It was rebuilt in stone under Petru Rareş in the mid-16th century as a perfect circle. The fortress is an important attraction in Soroca today, having preserved the architecture of old Soroca to the present day.