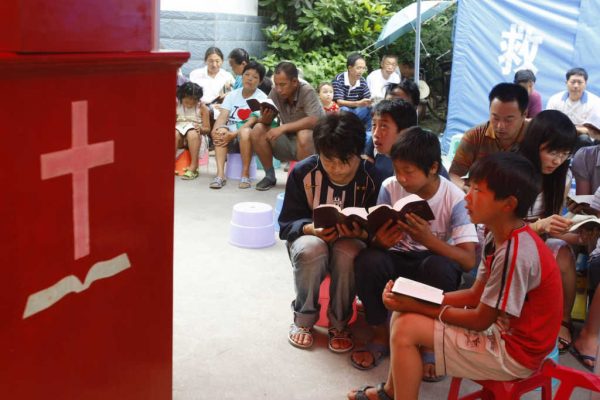 Authorities in China have continued to crack down on the Christian faith, this time by erasing faith-based words from children’s stories contained within school workbooks.

According to persecution watchdog The Barnabus Fund, the Chinese government has sanctioned the removal of the words “God,” Bible,” and “Christ” from popular storybooks such as “Robinson Crusoe” and “The Little Match Girl.”

The stories are part of a new textbook being introduced in China that aims to help students “understand other cultures,” according to the Ministry of Education.

How have the words been erased?

In the 18th century classic novel, castaway Robinson Crusoe discovers three Bibles inside a shipwreck. This is a significant moment in author Daniel Defoe’s tale, as Crusoe would go on to use the Scriptures as his moral compass and means of spiritual reformation while stranded on the island. However, the redacted Chinese version simply notes that Crusoe happened upon “a few books,” trashing the idea that he discovered the spiritual texts in the first place, let alone entertaining the notion that they had any sort of positive effect on him.

Finally, contained within Anton Chekhov’s story “Vanka,” there is a section where a prayer is prayed inside a church, during which the word “Christ” is mentioned several times. In the Chinese version, the term completely vanishes from the text.

The reforming of Christianity in line with party goals

For several years now, China has been attempting to strip Christianity of any political or social power. In an attempt to garner total devotion from its citizens, the government has continued to encourage its people to trust wholly and completely in the communist regime. The authorities are constantly reminding the people to turn away from Christ and instead pledge total allegiance to the President, Xi Jinping.

Last year, the government announced it would be reinterpreting Christianity according to its ideological manifesto — something it called “sinicization.”

The Christian scriptures, the Chinese government declared, would only be allowed to be studied if they were solely interpreted as encouraging and affirming “the core values ​​of socialism.”

Arresting Christians who are giving out audio bibles

According to persecution watchdog, International Christian Concern, the Chinese authorities have arrested seven employees of an electronics store for selling audio bibles. The employees, who are thought to be Christians, were arrested on charges of “illegal business operations,” according to Father Francis Liu from Chinese Christian Fellowship of Righteousness.