Source: DECR
Natalya Mihailova | 05 May 2016
On 1 May 2016, the Feast of the Radiant Resurrection of Christ, His Holiness Patriarch Kirill of Moscow and All Russia met with pilgrims from China, descendents of the Albazinians. 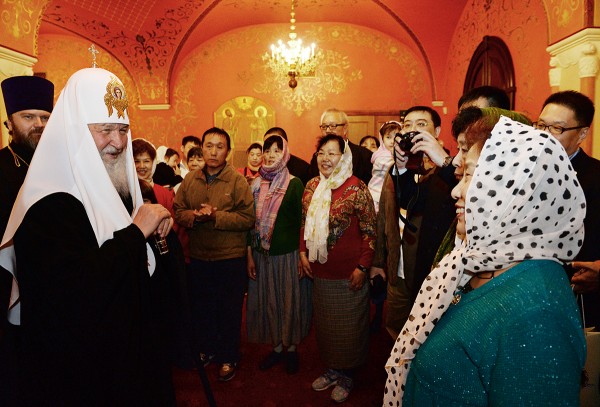 As is widely known, the history of Orthodoxy in China dates back some 330 years. It began when the captive Cossacks, including a priest, defenders of the Albazin Fort on the border with China, were brought to Peking. 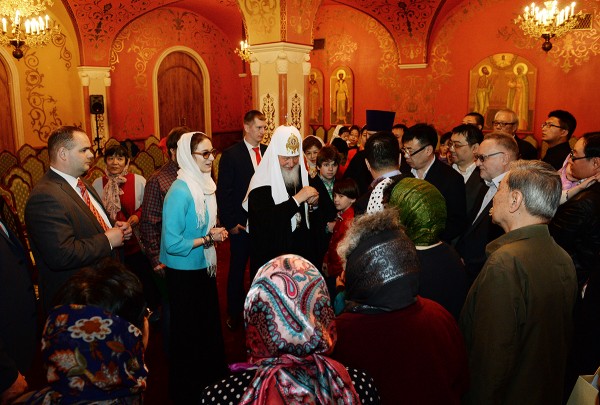 The trip was organized by the Moscow Patriarchate’s Department for External Church Relations with the assistance of Mr. Ivan Polyakov, Director General of the Interstate Corporation for Development, and the Russian-Chinese Business Council. The pilgrims from China will visit Moscow, Tver, Novgorod and St. Petersburg, as well as the Valday region, will take part in Easter services and celebrations and visit some Orthodox churches and monasteries.

Among those who took part in the meeting with the Primate of the Russian Orthodox Church at the Cathedral of Christ the Saviour were also archpriest Nikolai Balashov, DECR vice-chairman, and Mr. Dmitry Petrovsky, DECR staff member.

Greeting the pilgrims, the Primate of the Russian Orthodox Church said in particular, “You are bearers of historical memory about Orthodoxy in China, and by God’s mercy we have lived to see the time when people in China can not only preserve the memory, but also live in accordance with their religious beliefs.”

As His Holiness noted, he recalls with satisfaction his visit to China in 2013, during which he met with Mr. Xi Jinping, President of the People’s Republic of China. “As a result of that meeting, some very positive changes took place,” the Primate of the Russian Orthodox Church said, “As you know, we had an opportunity to ordain a Chinese young man. Now we can say that the priesthood in China has been restored. The new priest is celebrating services in Harbin. I hope that more Chinese young men will be ordained priests and that church activities in China will gradually develop.”

His Holiness expressed his joy over the development of good relations between Russia and China. “I believe it will be for the benefit of the Chinese Orthodox Church as well,” Patriarch Kirill said.

Mr. Vasiliy Dubinin, descendant of the Albazinian Dubinin family, addressed the Primate of the Russian Orthodox Church, saying in particular, “We, descendants of the Russian people who live in China, are very pleased to visit the Cathedral of Christ the Saviour in these Paschal days and to meet with the Patriarch of Moscow and All Russia. We are grateful to you for this opportunity. Our ancestors, the Albazinians, were held captive in the city of Peking, and since then our families have been living in China. We have preserved historical memory. And those who have that memory have hope and future, and it is our hope that we will have common future with the Russian people and with the Russian Church.”

To conclude the meeting, His Holiness Patriarch Kirill presented the pilgrims with memorable gifts.