A large marble cross discovered high in the mountains of Baltistan is thought to be up to 1,200 years old
Pravmir.com team | 19 June 2020 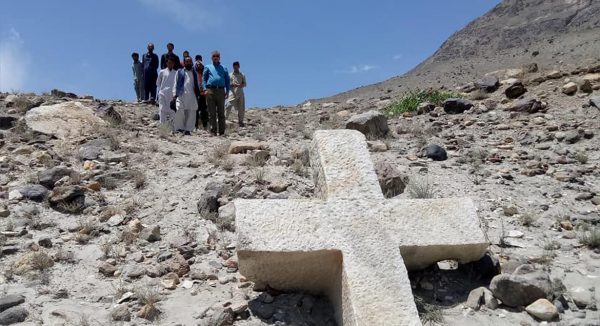 A Christian cross believed to be up to 1,200 years old and weighing more than three tons has been discovered in Skardu in northern Pakistan, reports UCA News.

A three-member expedition team from the University of Baltistan, Skardu, discovered the huge marble cross high in the mountain range of Kavardo in Baltistan.

The team — led by vice-chancellor Muhammad Naeem Khan together with director of academics Zakir Hussain Zakir and director of external links Ishtiaq Hussain Maqpoon — visited the site to study the cultural find accompanied by local villagers and mountain guides.

“The huge cross of marble rock weighing 3-4 tons and measuring approximately 7×6 feet has been found some two kilometers from the base camp, high in the mountains of Kavardo, Baltistan, overlooking the Indus River,” the team said in a press release on June 14.

Most viewed articles
Metropolitan Hilarion of Eastern America and New York to Be Buried in Jordanville on May 22162
Patriarch Kirill: The Peoples of Russia and Ukraine Have No Interest in the Conflict158
Communion restored between the Serbian Orthodox Church and the Macedonian Orthodox Church – Ohrid Archbishopric118
Metropolitan Hilarion of Eastern America and New York Reposes in the Lord117
What Do We Celebrate at Mid-Pentecost?100
Metropolitan Onuphry: One Needs to Search for the Truth in Spiritual Life, not Easy Ways93
Celebrating 100 Years with Paschal Joy62
Patriarch of Serbia to Concelebrate with Archbishop Stephen of Ohrid38
Family Life and Spiritual Warfare17
Most popular authors
Pravmir.com team685
Ioannis Foundoulis100
Priest Luke A. Veronis62
Archpriest Michael Gillis17
Maria Trushanina1