Two men went up into the temple to pray; the one a Pharisee, and the other a publican. The Pharisee stood and prayed thus with himself, God, I thank thee, that I am not as other men are, extortioners, unjust, adulterers, or even as this publican. I fast twice in the week, I give tithes of all that I possess. And the publican, standing afar off, would not lift up so much as his eyes unto heaven, but smote upon his breast, saying, God be merciful to me a sinner. I tell you, this man went down to his house justified rather than the other: for every one that exalteth himself shall be abased; and he that humbleth himself shall be exalted (Luke 18:10-14).

Great Lent is gradually approaching. The first piece of news was the story of Zacchaeus: hearing it during the Liturgy we understood that it is time to prepare for the fast. So far, it is perhaps enough to keep in mind the thought that the fast will start soon.

Since nothing will happen until the next Saturday and Sunday, we are almost ready to believe that this time it will pass us by. But the Church does not let us relax; it does not let us stagnate in self-sufficiency and complacency. At the festal Matins after the Sunday Gospel, after the singing of “Having beheld the Resurrection of Christ” and Psalm 50, we hear a hymn, the content of which leaves no doubt: “Open unto me, O Giver of Life, the gates of repentance.”

In the morning, at the Liturgy, the parable of the Publican and Pharisee is read. 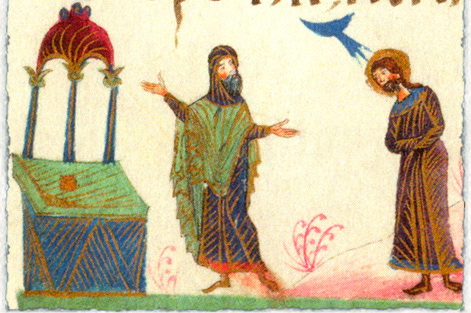 Who are the personages of this parable, told twenty centuries ago? We can picture this fairly well. These were people of their time and place. The Publican was a tax collector, a man despised by all: he extorted money from his compatriots, a part of which went to the Roman occupiers and a part of which went into his own pockets. The Pharisee, however, was a respectable man, a “nationalist in the good sense of the word,” a zealous observer of the Law and, to an even greater degree, of the decrees of the elders. One might say that these two people belonged to diametrically opposed social groups within the Israelite society of the time. The publican was unequivocally a sinner, and the Pharisee… Well, of course, all of us are sinful, but on the whole the Pharisee was a typically good person, a respectable citizen.

Yet all the while all of us know well, from reading or hearing this parable repeatedly, that the Pharisee is bad and that the publican is good. Is this really the case?

Let us look at what the Gospel says about other publicans and other Pharisees. Here, for example, is the publican Matthew. He left everything and followed the Teacher. Here are other publicans – the Savior is sitting and eating with them. But does this mean that publicans are good in and of themselves? No: Christ says nothing of the sort, and nowhere in the Gospel do we encounter such a claim.

Let us look at the Pharisees. Does the Lord scold them for belonging to Pharisaism, for following the Law, for their “nationalism in the good sense of the word”? No, not at all! Not a single iota will pass from the Law, Christ says. He replied to the Canaanite woman: I am not sent but unto the lost sheep of the house of Israel. There is no modernism or cosmopolitanism here. Moreover, Jesus orders us to fulfill everything that the Pharisees say.

Only do not act as they do, the Teacher warns us. Why? Because they say, and do not.

This is the essence of Pharisaism as we now understand it. Pharisaism became synonymous with hypocrisy, duplicity, and sanctimoniousness. Nonetheless, this awareness and knowledge do not prevent us from making the same mistake over and over again.

The publican was the opposite of the Pharisee not only socially, but also spiritually. It is obvious that the publican is bad. Yet many of the publicans recognized this and wanted to change. The Pharisees, however – whether good or not entirely good – is satisfied with himself. He recognizes the correctness of his life.

Our salvation is accomplished by co-working with God. God can do anything, and He does nearly everything for us (the parable of the Prodigal Son, which comes next, is about this). But action and effort are required of us. What this action will be, where we will direct our will, once again depends on us. If we humble ourselves, the Lord will exalt us. At the level of decision-making the choice is obvious. Yet how difficult it is to make this choice in actual fact, how hard it can be to confirm it by our very lives!

O Lord, help us to change and to bring Thee sincere repentance in the days of Great Lent!