Time to Get Ready for Lent

Source: Eastern Christian Insights
Homily for the Sunday of the Pharisee and the Publican in the Orthodox Church
Priest Philip LeMasters | 21 February 2016 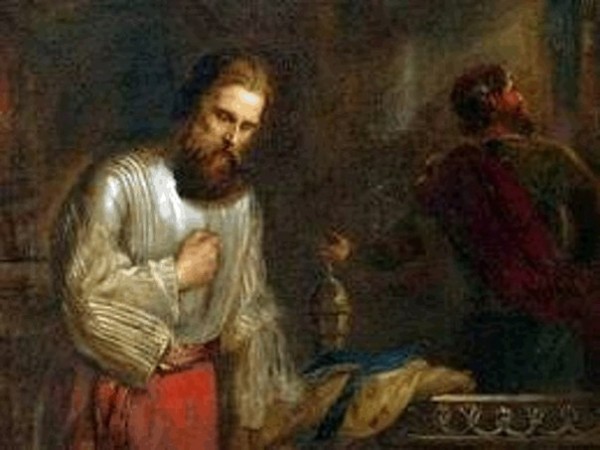 When we hear the gospel passage about the Pharisee and the Publican, we know that Great Lent is not far away.  We are now in the first Sunday of the Lenten Triodion, the pre-Lent period when we begin to prepare for the spiritual journey of repentance and renewal that will soon begin.  This year Lent begins on March 18 (Ed. note: In 2016 Lent begins on March 14); so it’s time to get ready.

The first thing that the Church reminds us of in the pre-Lent period is the danger of pride, of raising ourselves up too high.  That’s what the Pharisee did.  He followed all the laws of his religion.  He prayed, fasted, and gave alms.  But he fell into the self-righteous judgment of others.  Standing prominently in the Temple, he actually thanked God that he was better than other people:  extortioners, the unjust, adulterers, and even the tax-collector who happened to be in the Temple that day also. He exalted himself, but God humbled him, for the Lord did not accept his prayer and he went home unjustified.

But the complete opposite was true of the tax-collector also known as the publican.  Like Zacchaeus, this man was a traitor to his own people and a thief who made his living by charging more than was required in taxes and keeping the difference for himself.  Unlike the Pharisee, he was not proud of himself; instead, he was ashamed.  So much so that he would not even raise his eyes up to heaven, but beat his breast in mourning for his sins, saying only “God, be merciful to me a sinner.”  He humbled himself, but God exalted him, for the Lord accepted his prayer and he went home justified.

As we begin to prepare for the year’s most intense time of spiritual discipline, we must keep this gospel text squarely in mind.  For it is possible to pray, fast, and give alms in ways that do us more harm than good.  It is possible to view these and other good deeds as our own accomplishments that somehow raise us high in our own eyes and become a justification for looking down on others.  It is possible to think that God is some kind of score keeper who gives us points for good behavior such that we save ourselves by obeying the rules.

Well, the Pharisee followed all the rules, but completely missed the point.  The publican broke all the rules, but still opened his heart and soul to the mercy of God.  That’s because he got the key point:  namely, that God’s mercy is never earned or deserved; that we never impress God or earn His blessings by anything that we do; that we share in the life of our Lord by His mercy, which we receive through the true humility of repentance.

For that is the one saving virtue of this tax-collector:  he humbly confessed the truth about where he stood before God.  “Be merciful to me a sinner,” the man said with a bowed head and beating his breast in sorrow for the mess that he had made of his life.  He humbled himself; he made no defense or excuse for anything; he hid nothing and threw Himself completely upon the mercy of the Lord.

Our spiritual journey in Lent should be focused on becoming like this humble, repentant publican.  But in order to do that, we have to have to stop being Pharisees, which is hard for many of us.  After all, we are respectable people who go to church and lead what appear to be upright lives.  We also pray, fast, give alms, and do other good deeds.  And we have to admit that, at least from time to time, we look down upon others.  We criticize and judge them, magnifying their weaknesses and ignoring our own.  Though we may not pray with the self-righteous boldness of the Pharisee, we sometimes come close in our thoughts, words, and deeds concerning other people.

If we allow that spirit of pride into our Lenten observances, we will do more harm than good to ourselves.  It would be better not to fast, pray, and give alms than to do so in ways that lead us to worship ourselves and condemn other people.  The worst criminals have more hope for receiving God’s mercy than those who convince themselves that they are perfect, that they are so exalted that they are justified in pronouncing judgment on others.  That’s why the publican went home justified, but the Pharisee did not.

As we begin to discern how we will pray, fast, give alms, and undertake other spiritual disciplines this Lent, I hope that we will all remember that these blessed practices are wonderful teachers of humility.  It’s all too familiar for most of us.  We set out to pray and our mind wanders.  We try to fast and we immediately want to stuff ourselves with rich and delicious food.  We set out to give even a small amount to the needy or the church and are overwhelmed with our financial worries or desire to buy things we don’t really need.  We do our best to forgive, but some painful memories still come on strong.  We intend to read the Bible or help a neighbor, but end up falling prey to our old habits.

When we struggle in these ways this Lent, we should take heart, for we are in the perfect place to open ourselves to the mercy of Jesus Christ.  When we acknowledge that we are weak and self-centered, we gain at least some of the spiritual clarity of the publican who knew that he had nothing to brag about, who knew that he had failed spiritually and morally in life, who knew that his only hope was in the mercy of God who stopped at nothing to bring healing and forgiveness to sinners.   He said, “God, be merciful to me a sinner.”  This must be our constant prayer when the disciplines of Lent reveal truths about us that we don’t like, that are uncomfortable and depressing, and we are tempted simply to give up.

Even worse, we may be tempted to the fantasy world of the Pharisee, who was blind to his own weakness, his imperfection, his sinfulness.  The sad reality is that it’s really not very hard to lie to ourselves and even to God.  It may seem easier and less painful than admitting the truth.  But the more self-righteous dishonesty we allow into our souls, the weaker and more confused we become; and the harder it is for us ever to escape from self-imposed slavery to our own lies and delusions.

The fourth-century saint Macarius was a monk in the Egyptian desert.  Satan once complained to him, “Macarius, I suffer a lot of violence from you, for I cannot overcome you.  Whatever you do, I do also.  If you fast, I eat nothing; if you keep watch, I never sleep.  There is only one way in which you surpass me:  your humility.  That is why I cannot prevail against you.”

Let us all use this Lent to grow in the one characteristic that will enable us to overcome all the temptations of evil:  humility.  Fasting, almsgiving, prayer, forgiveness, and all the other spiritual disciplines are of no use at all without it.  But with true humility, they shine brightly with the light and holiness of the Kingdom of Heaven.  Even if we are lousy at fasting, inattentive in prayer, and inept at forgiving others, there will still be hope for us in the Lord who justified a rotten, crooked tax-collector,  a man who acknowledged the sad truth about himself and called from the depths of his being for mercy.  Like him, we must humble ourselves.  Like him, we must make no excuses.  Like him, we must judge no one but ourselves.  If we do so, we—also like him—will return to our own homes justified, not by our good deeds, but by the unfathomable mercy of our Lord, God, and Savior Jesus.   May this be the outcome of our Lenten journey this year.

As we enter into our last days of preparation for celebrating our Lord’s Nativity this week, we need…

Most viewed articles
The Truth About Riches169
The Muskox Response To COVID-19118
Metropolitan Onuphry Speaks on How to Protect One’s Soul From Sin95
Patriarch Porfirije Thanks the Russian Church for Participation in Restoring Serbian Churches89
March for Life participants optimistic for a post-Roe America: ‘This is just the beginning’49
Most millennials, Gen Z adults support bans on abortions when baby’s heartbeat is detected: poll48
Do We Act Differently Than Others?40
Strong Orthodox Presence at the 2022 March for Life26
Sunday of the Samaritan Woman1
Most popular authors
Pravmir.com team258
Fr. Gabriel Bilas169
Archpriest Michael Gillis118
Ryan Foley49
Priest Luke A. Veronis39
Maria Trushanina1