The story of Zacchaeus concerns precisely this. In our daily church life we almost do not distinguish between Confession and repentance. But the Savior did not speak with Zacchaeus one on one; He did not cover him with the epitrachil [stole]; He did not read any prayer of absolution over him. It was not Confession, but repentance did occur.
Priest Theodore Liudogovsky | 29 January 2012

And Jesus entered and passed through Jericho. And, behold, there was a rich man named Zacchaeus, which was the chief among the publicans, and he was rich. And he sought to see Jesus who He was; and could not for the press, because he was little of stature. And He ran before, and climbed up into a sycomore tree to see Him; for He was to pass that way. And when Jesus came to the place, He looked up, and saw Him, and said unto him, Zacchaeus, make haste, and come down; for to day I must abide at thy house. And he made haste, and came down, and received Him joyfully. And when they saw it, they all murmured, saying, That He was gone to be guest with a man that is a sinner. And Zacchaeus stood, and said unto the Lord: Behold, Lord, the half of my goods I give to the poor; and if I have taken any thing from any man by false accusation, I restore him fourfold. And Jesus said unto him, This day is salvation come to this house, forsomuch as he also is a son of Abraham. For the Son of man is come to seek and to save that which is lost (Luke 19:1-10).

The reading about Zacchaeus in the Gospel according to Luke immediately follows the story of the healing of the blind man that was heard last Sunday. Yet between these fragments lies a liturgical watershed: while the reading for the thirty-first Sunday after Pentecost (the story of the blind man of Jericho) in fact depends on the day of last year’s Pentecost and Pascha, the reading about Zacchaeus, although assigned to the thirty-second Sunday after Pentecost, is in fact connected not with the last Pascha, but with the coming one. In other words, when we hear the story of Zacchaeus in church it means that Great Lent begins in four weeks.

Great Lent, as you know, is a time of repentance. The story of Zacchaeus concerns precisely this. In our daily church life we almost do not distinguish between Confession and repentance. But the Savior did not speak with Zacchaeus one on one; He did not cover him with the epitrachil [stole]; He did not read any prayer of absolution over him. It was not Confession, but repentance did occur. A change took place in life, in consciousness, in intentions, and in actions.

It is precisely this change that is precious in God’s eyes. The entire Gospel is about this: Repent ye, for the kingdom of heaven is at hand. Repent, change internally, strive upwards! Indeed, those sinful actions that have remained in our past, those evils that we have inflicted on our neighbors – often none of this has been corrected. Yet any person can begin life with a clean slate, and former transgressions and sins will not be held against him. Such is the power of repentance. 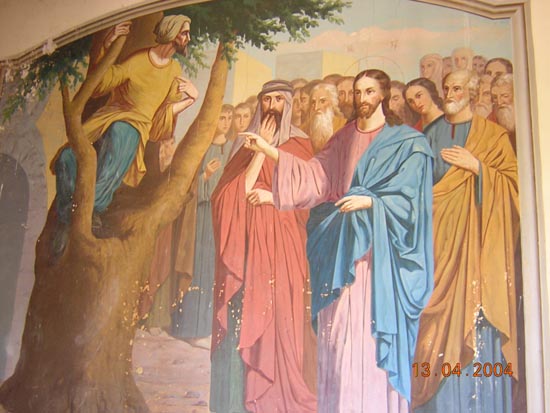 The opposite is also true: one can also perform as many good deeds as one wants, but if all the while there is no movement forward and upwards, if there is no inner transformation, if over time one grows accustomed to one’s own correctness and begins to look down on the people around one, then we are dealing with one of those righteous people whom the Savior exposed so ruthlessly. If we are to employ the language of mathematics, the state of our soul and the degree of our proximity to God are not determined by integrals – the sum of good or evil deeds – but by differentials, derived from where we are headed at a given moment: up or down.

Zacchaeus, as the Evangelist tells us, was small of stature. It is possible that this created an inferiority complex in his soul. Perhaps he was suspicious and irritable. We know nothing about his character. Moreover, we know nothing – this truly remains the secret of this man’s soul! – about why Zacchaeus so desired to see Jesus. But he desired this passionately! Therefore, forgetting about his position of authority, even around people who despised him, he climes a sycamore tree like a child – for, as Zacchaeus knew well, Jesus was to pass by there.

Thus does Zacchaeus begin his upward ascent. How this movement was born in his heart remains unknown to us, but it continued quite literally: he climbed on high to rise above the crowd. Of course, he did not stay in the tree – he came down – but his desire to see the Teacher was fulfilled and the path to a new life was thereby opened to him.

In speaking of this Gospel reading, we of course have in mind above all its use in the Sunday Liturgy. But this same fragment is used on two other occasions: in the “Rite of the Blessing of a New Home” and in the Unction service.

Zacchaeus did not call Jesus to himself. On the contrary, He Himself said commandingly: to day I must abide at thy house. The God-Man entered Zacchaeus’ home – and the life of the chief among the publicans was transformed. Such a transformation takes place in the life of each person who receives Baptism. The blessing of a home is meant to help us recall this singular event (yet one which requires daily reaffirmation in practice) by which our souls were transformed by grace.

The reasons why the story of Zacchaeus is read as one of the seven Gospel readings at the service of Unction are less obvious. It appears that here no healing is described and no miracle is seen like that of the healing of the man born blind or the paralytic. Yet we know well that the body is closely connected to the soul. In the rite of Unction we pray not only for bodily health, but also for our healing from spiritual passions and for the forgiveness of sins. And the case of Zacchaeus is a vivid example of such forgiveness and healing.