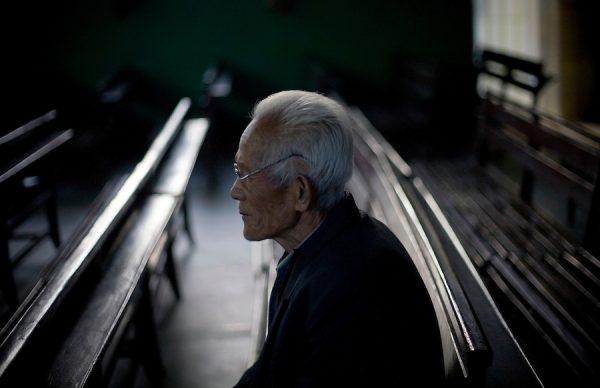 China is one of the worst persecutors of Christians, according to Open Doors USA. Reuters

China is forcing Christians to replace posters of Jesus Christ with Communist leaders – and threatening to cancel the poverty alleviation benefits of those who refuse to comply.

Eighty-year-old Fei Zhongju from Xiayi county revealed what authorities told him after barging into his home in October 2018: “If we come back for inspection and find that you haven’t put up Chairman Mao’s portrait, we’ll cancel your poverty alleviation benefits.”

Fei’s wife revealed that her husband fell from the table and seriously injured himself as he attempted to get up and comply with the orders.

“What have we believers in the Lord done wrong,” the woman said. “The government is forcing us to tear up portraits of the Lord Jesus, and as a result, my husband was injured.”

Since early February 2018, nearly 1,400 Christian items have been destroyed all across the townships of Xiayi county, according to the outlet. Some counties have been left entirely without any religious symbols.

The South China Morning Post reported that thousands of Christian residents in the rural areas of southeast China swapped images of Jesus with Xi on the walls of their houses after authorities threatened to remove the government’s poverty-relief measures.

The government’s program was initiated to “transform believers in religion into believers in the party,” a local report said.

Meanwhile, Christians in the central Henan Province have also complained that the government is forcefully turning churches into theaters, game rooms, and other types of entertainment venues.

In light of these abuses, persecution watchdog group Open Doors USA ranked China number 27on its World Watch List of countries where Christians face the most severe persecution for their faith, marking a 16-spot jump from its previous ranking. Open Doors notes that within the last year, the country “saw increases in stricter state control of religious rights.”