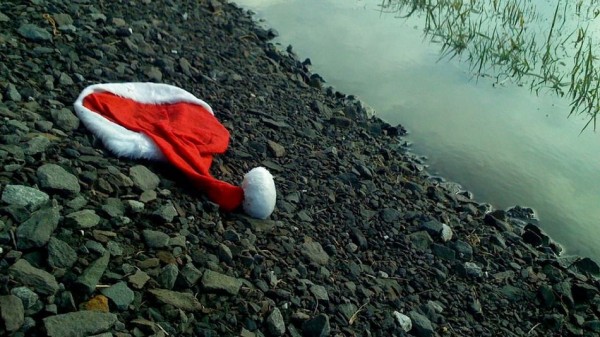 See if you can identify with the following scene. It’s Christmas morning, and everyone is gathered around the tree. Presents are handed out and the sound of tearing wrappers fills the air. At first the children squeal with excitement as they discover the gifts. It’s a Kodak moment, the picture perfect Christmas.

Then, slowly, the atmosphere shifts. With their presents unwrapped and laid out before them, the children start to squabble amongst themselves. If you have very little ones, like I do, they seem to become overwhelmed by the sheer mass of stuff they now possess. They become more selfish, demanding and peevish, or else withdraw to play with the wrappers and the boxes rather than the presents themselves. They are easily provoked to tears. Adults, a little more nuanced in their behavior, stack their collection of gifts carefully in a corner, and try to ignore the faint but distinct hollowness within.

That’s it. Christmas is over. We purchased our stuff in a frenzy of feverish activity, then wrapped carefully and placed them beneath the tree. But now, with wrappings strewn around like the victims of tornado, the stuff is, well, just more stuff to be added to the rest of the stuff we already possess.

Somehow it never quite ends as it was supposed to, as we hope it will, Christmas after Christmas. Our children, so excited by the potential of unwrapping their gifts, seem unhappier after the fact than before it. More possessions, rather than satisfying, seem to have made us less content than they were before.

This is the paradoxical tragedy of materialism. The more we own, the happier we’re supposed to be. The reality is, though, the more we have, the more ungrateful, dissatisfied, peevish, demanding, or simply indifferent, we become. We want to fill some hole within ourselves, and we are duped year after year into thinking that the appropriate filler is a new Xbox or the latest installment of Toy Story. But these and other material things, rather than filling the hole inside us, seem to expand it instead.

However, the fulfillment of these material needs has made the potential guests both ungrateful and totally unresponsive to the generosity of the householder. The joy of the feast, which in other Gospels is actually a marriage feast that a king holds for his son, is lost on them because they believe they have already filled the hole of their needs. That’s why the lord of the household sends his servants to bring the poor, the maimed, the blind and the lame to share in the banquet. (Luke 14:21) They have nothing. They are hungry and needy and so their response to the invitation will be wholehearted and joyful.

I heard it said once that every human being has a “God-shaped hole” within them—an emptiness, a yearning for something more, something bigger than they are. Every year, we turn Christmas into a season when we frantically try to fill that hole with something—presents, good cheer, family, and even a little religion—in the hope that perhaps this time, the hole will be diminished just a little, if not filled in completely.

The climactic moment on Christmas morning—when the season explodes like a cracker with the cheap toys and paper crowns inside, and all we are left with is a pile of stuff and an emptiness even greater than before—that moment is a reminder that the God-shaped hole cannot be filled in the way we have been led to believe. The field, the five yoke of oxen and the wife—all the stuff we have in our life—just won’t cut it, because they are the wrong shape and ultimately, too small for the size of the hole we want to fill.

In the end, only the infinite God can fill the God-shaped hole. Our natural hunger for the divine, which savvy marketers cunningly manipulate to drive us into the malls, can be filled by none other than Him. Perhaps this Christmas, we will take that truth to heart and accept the invitation to the one feast that will truly satisfy us: the feast of the One who is the bread of life, the fattened calf, the wine that gladdens our hearts forever.

Most viewed articles
We Are Not Saint Mary of Egypt (But We Can Still Repent)193
Orthodox Priest Rescues Two People from Fire in Constanța129
Dining with Caesar125
Athens and Jerusalem: the Role of Philosophy in Faith, with Analysis by St. Gregory Palamas115
Archbishop of Australia Attends Commemorative Events for Battle of Crete in Melbourne30
What Does Asceticism Look Like?1
Most popular authors
Archpriest Geoffrey Korz193
Aurelian Iftimiu129
Archpriest Lawrence Farley125
Eric Hyde115
Pravmir.com team29
Maria Trushanina1
Archpriest Michael Gillis1