God who Speaks in Arabic 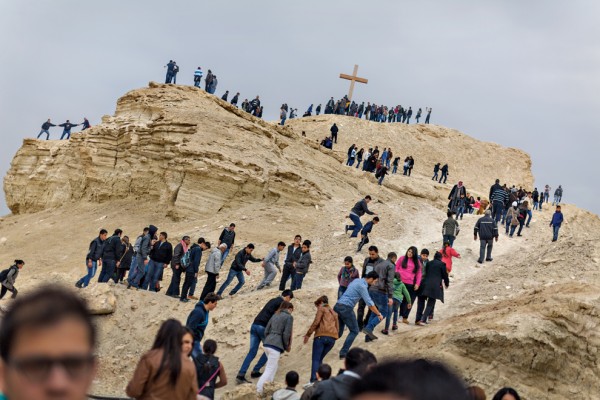 Picture of Arab Christians on the banks of the Jordan River. Photo: John Stanmeyer, www.nationalgeographic.com/

The Holy Apostle Paul mentions in his Epistle to the Galatians that shortly after he was guided to faith in Christ he went off to “Arabia” and then returned to Damascus (Galatians 1:17). At that time, “Arabia” meant the Arabian Peninsula, Jordan, and southern Syria, all the way to Damascus. It included the kingdom of the Nabateans, Petra, Jerash, Philadelphia (modern Amman), Bosra, and Hawran. It is likely that Paul went to the Arab lands adjacent to Damascus, to that barren and mountainous desert, to Bosra and its surroundings.

At the beginning of the 2nd century, the Roman Empire gave the name “the Province of Arabia” to the lands of the Nabateans after adding them to the territory of the Empire. The city of Bosra witnessed an agricultural, commercial, and architectural after it was declared to be the provincial capital in the year 106 under the emperor Trajan.

There is no doubt that Arabia, and especially its capital Bosra is one of the first regions to accept Christianity. Its location near Palestine, where Jesus lived, attracted the apostles there from the time they first set off bearing the Gospel to all the ends of the earth. In the tradition of the Church it is said that the apostle Timon, one of the Seven Deacons, was consecrated bishop of Bosra. The city’s bishops took part in many local and ecumenical councils of the Church. Al-Maqrizi wrote that the Apostle Matthew “Was the first person to proclaim the Gospel in Bosra.” Al-Tabari mentions “the bishop of the Ghassanid Arabs.”

In the Fifth and Sixth centuries, Christianity reached all the towns and cities of Hawran, such that all the residents of the Province of Arabia had become Christian. Arabia became famous for its ascetic life and monasteries multiplied– some of these are still in existence or have ruins that still exist. The monks pastored and protected the Ghassanid princes, who founded some of these monasteries at their own expense. The monks had great success in spreading Christian faith among the Arab tribes that accepted Christianity. Numerous bishoprics were established in the Province of Arabia starting in the fourth century and their number multiplied in all the regions and cities dominated by Arab tribes, which in addition to Bosra included Jerash, Amman, Madaba, Derah, Sanmin, Soueida, Shahba, all the way to Harran, Rusafah, Palmyra, and Baalbek… Baalbek, where al-Baladhuri mentions a truce made by the Muslim general Abu Ubaydah ibn al-Jarrah with its Christian population, Arab and non-Arab, which proves the presence of Arabs in the city prior to the conquests. From the first moment of the Church, Christianity has spoken the Arabic language. On Pentecost, the day when the Holy Spirit rested upon the disciples, the day when “they were all filled with the Holy Spirit and began to speak in other tongues, as the Spirit gave them to speak,” the day when those present– among them Arabs– were amazed at how they heard the glorious apostles “speaking in our languages, giving glory to God” (cf. Acts 2:1-11), God spoke Arabic.

On that day two thousand years ago, God spoke Arabic. In Arabic God, His Word and His Holy Spirit spread the Gospel in cities and villages, deserts and wastelands, in churches and monks’ cells, in prayer and fasting, in hymns and supplications, in the lives of saints, martyrs, righteous ones, ascetics and monks.

God adopted Arabic and made it Christian, so it can bear witness to Him and His Church forever. He baptized it in Spirit, water and blood. Arab Christianity shall remain faithful to this precious trust, this baptism that it received once and forever. No one can remove it from its roots in the past, the present and the age to come.