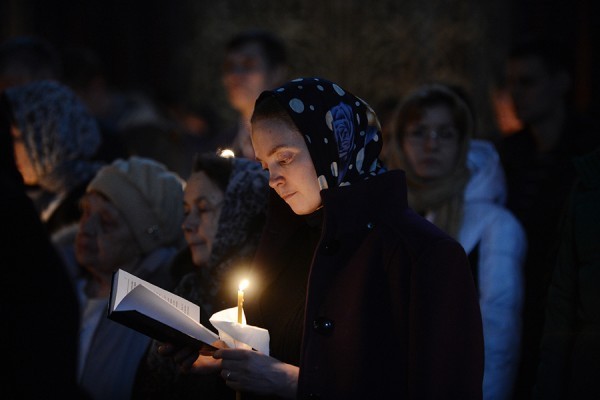 The season of Lent is upon us! Have we noticed it yet? Lent is something that seems completely out of place in the world today, a holdover from some earlier time. We have seen our Roman neighbors virtually drop the season of Lent from the calendar. It has sadly been reduced to abstinence from meat on Friday (if you under 65 years of age). Gone also are the Lenten devotions of the past in many parishes.

Why does the Orthodox Church continue to make such a fuss about Lent, and what about all of those pesky Lenten regulations such as fasting and weekday services? Is this necessary in the modern world?

There is a story about an Orthodox monk walking down the street in the middle of Atlanta, Georgia, dressed in his rasson, wearing his hair and beard in the monastic fashion and carrying his “chotki” or prayer rope. An onlooker, of “evangelical” bent, stopped him and inquired as to why he burdened himself with these “external things – these rocks that are only empty works. Doesn’t the Bible teach that salvation is through faith and not works?”  The monk answered:

“The fathers did well when they came to our aid and established for us the practice of this Lenten Fast. As soon as the season of Lent draws near, even the laziest of men rouses himself, even though no one counsels or advises him. Why? He gets counsel from the season of Lent ” (Against the Jews III:6).

In reality, Lent presents to us the essence of the “Life in Christ,” a life that must be centered on repentance and the acceptance of the Cross of Christ. Unfortunately, Lent has often been reduced to a change in diet twice a week and several minutes going over an examination of conscience in preparation for our annual brief confession. Since we do not feel that this minimal effort has had any value in moving us toward God, we fail to see any purpose for it. But the failure is not with Lent, but with us in that we have been willing to accept “minimums” as “maximums.” In the 1930’s, a prominent liturgical scholar observed “minimums become maximums.”  In short the least that people are asked to observe becomes the most they will observe. This is illustrated quite well with the reception of the Eucharist. The Church requires it members to receive the Sacraments a minimum of once a year. For many people, that is the maximum they will ever receive. His Eminence, Metropolitan Nicholas, and before him Bishops John and Metropolitan Orestes, carefully specified in their Lenten messages “minimum” rules for Lenten fasting. Yes, these are minimum rules which our hierarchs in their wisdom have established because they know that many people could not or would not observe the “sterner measures which the Church has handed down to us.” However, it is these “sterner measures” that they recommend each year to those who are able (The Ascetic Fathers always recommended a light and steady rule to one which was stern and soon broken).

When the time for the annual confession comes along, we often may spend several minutes in contemplation of the previous year and prepare for confession as if we were preparing our tax form. In preparing our taxes we figure out what we owe the government and what is ours to keep. In preparing for confession we figure out what we “owe” God. Amazingly, it never seems to be very much more than minimal repentance for some bad language, the occasional Friday hamburger and several other minor offenses. This we dutifully render to God, and like the IRS, He will hopefully leave us alone for another year. When the minimums of the spiritual life become the maximums, spirituality degenerates into a lukewarm formality. Fasting, confession, repentance, prayer, Eucharist, etc., all lose their essential meaning and become “burdensome obligations.”

Tragically, there is no “minimum heaven.” God does not deal in minimums but in maximums – just look at the Cross. We want the maximum from God. Isn’t it time we started giving the maximum to God? This Lent, resolve to go beyond the minimums. Dare yourself to fast more often, not to provide reason to boast, but to show your love for God and the gift of His Son. When you prepare for Confession, don’t read those legalistic “examination of consciences,” but ask yourself one question: “What is there in my life that I would be ashamed for Christ to know about?” Ask for the courage and strength to confess it now, rather than to be accused before His Judgment Seat. Resolve to go to confession more often, remembering the words of St. John: “If we say we have not sinned then we make God out to be a liar” (1 John 1:10).  Finally, let us resolve to prepare and receive the Eucharist – not the minimum, but the maximum. If we wish to spend eternity with Christ in heaven, we must realize that eternity is now. Let us prepare for it by giving God our maximum, not our minimum. Lent will then become for us, not a burden, but a time for gathering diamonds in sorrow for our sins. We will rejoice in the grace of repentance that God pours into our hearts.

One of the perpetual questions that is always asked at this time of year is, "when is it…