“I do not admit guilt to anti-Soviet agitation. But I did say: ‘It is time for the Bolsheviks to realize that priests are not the issue, it is something else. Do they really not understand that priests do no harm to the authorities?’
Anastasia Koskello | 06 March 2015
The Russian Orthodox Church celebrates the memory of Hieromartyr Constantine Pyatikrestovsky on March 6 (February 21 on Old Calendar). In the bloody year of 1937, he was arrested on trumped-up charges of “anti-Soviet agitation” and sent to the Mariinsk camp. Fr. Constantine died from the heavy work of harvesting timber. 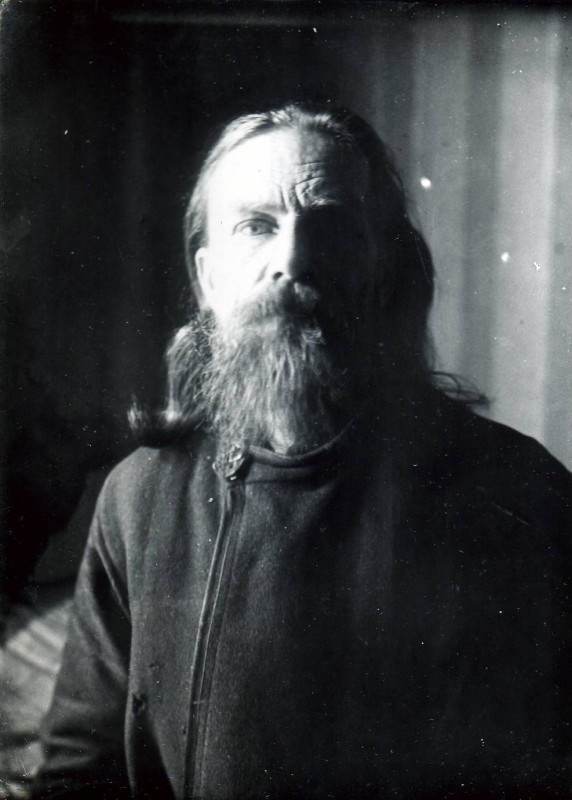 An elderly woman, Ludmila Sergeevna, often went to the post office. In the village near Moscow where she lived, everyone already knew where and why she went and did not ask any unnecessary questions. Ludmila Sergeevna did not go there to buy a newspaper – she was waiting for letters from her husband.

At first, the letters were from different addresses, but simple in content – generally her husband asked about domestic cares: “I am writing to you from Mariinsk… Say hello to my dear children and grandchildren… If you want to inform me of something, please write to the above address… I heard that my signature to a notarized power of attorney would be required when selling the house. Now you know how to do this… I have been imprisoned according to Chapter 58, Article 10.”

If it had not been for these last words, Ludmila Sergeevna might have felt more at peace. The fact that her husband was alive and well raised her hopes for the better. But the ominous article number overshadowed everything he had written before. For Soviet Russia, 58-10 was not just any set of numbers. Being sentenced on a “political” article in 1937 meant being sent to another world. No one knew if there was any possibility of return.

In reply to this letter, Ludmila Sergeevna wrote to her husband that she loved him very much and longed to see him, but she received no reply. Later she sent a package to the address on the envelope, in Mariinsk. Again and again she went to the post office waiting for the reply – but there were no more letters. Her children comforted her by saying that perhaps the mail was not working…

On April 7, 1938, Ludmila Sergeevna’s son, Panteleimon, went to the post office and mailed a new letter: “Greetings, Papa! It has been four and a half months since you left Dmitrov, but in the meantime we have received only one letter from Mariinsk. Why do you not write? Are you sick? We are anxiously awaiting a letter from you. Please write about your health, where you are now, and what you are doing. Please let us know if you have received the letter from Mama, as well as the money and the package. Please write more often. We are all alive and well. We wish you good spirits, health, and peace of mind. Maybe you need some kind of clothes, footwear, or food products – please write and we will immediately send them to you.”

In summer a response arrived. For some reason, it was written on the other side of the letter that Panteleimon had sent to Mariinsk. An inmate of the Mariinsk concentration camp wrote to Ludmila Sergeevna: “Dear Matushka! I would like to say, and not conceal from you, that I am the same as your husband. Do not be afraid, he has died… I feel sorry for you that you keep writing and writing to him. Finally, I see that your son, Panteleimon, wrote. I still have your two letters… We cried bitterly, and I decided to take the trouble and reply. Here is my humble request: do not write and do not look for him, he has passed away by the grace of God, and about the packages, check with the post office.”

Ludmila Sergeevna’s husband, Archpriest Constantine Pyatikrestovsky, did indeed die in a hospital of the Mariinsk camp on March 6, 1938, and was buried in an unknown grave. 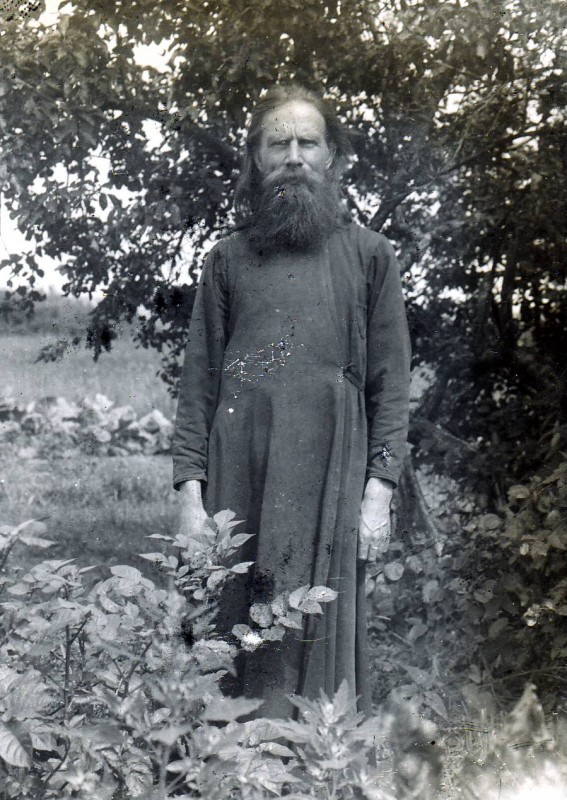 The last name Pyatikrestovsky came from his grandfather Stepan, the first priest in his family. He was a peasant, born in Pyat’ Krestov near Kolomna, Moscow region. When he was entering the Kolomna Theological School, Stepan was asked: “What family are you from? Where do you come from?” He replied that his family, the Yakovlevs, lived in Pyat’ Krestov. Since they had two Yakovlevs that year, they decided to enroll Stepan as Stepan Pyatikrestovsky. 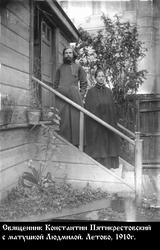 Fr. Constantine Pyatikrestovsky with Matushka Ludmila in the village of Letovo, where he served from 1903-1913. Photo taken in 1910. Source: pstbi.ru

Constantine Pyatikrestovsky was a Muscovite, the son of a deacon, and graduated from the Moscow Theological Seminary in 1897. As did most young men from priestly families at that time, he married the daughter of a priest: Ludmila Sergeevna Mitropolskaya. In 1897 he was first ordained a deacon and then a priest. Apparently he did not have any connections with people of consequence and, therefore, he served in village churches in the Moscow province. He was in the village of Konyushennaya Sloboda (now a suburb known as Zarechie) in the Dmitrov district when the revolution began. In the middle of the village stood a church in honor of the Entrance of the Most Holy Theotokos into the Temple. The Hieromartyr Constantine served at that church for a total of twenty-four years.

The Pyatikrestovskies were a strongly Orthodox family. Fr. Constantine and Matushka Ludmila had four children. They lived in a house near the church. They had a garden and kept goats. They made enough to help those in need. After the revolution, they even hired impoverished peasants.

According to the recollections of the villagers, Fr. Constantine was very kind and notable for his exceptional warmth of personality. But when it came to questions of faith, he was adamant. In the 1920s, when the majority churches in the district were seized by the “Living Church,” he did not succumb to the pressure of the renovators. In order to stress his support for the “old regime,” Fr. Constantine did not remove his cassock or riassa either on the streets or during farming work outside. No wonder he was named one of the five firmest “Tikhonites” in the Dmitrov district in the documents of the renovationist “Moscow Diocesan Administration.” 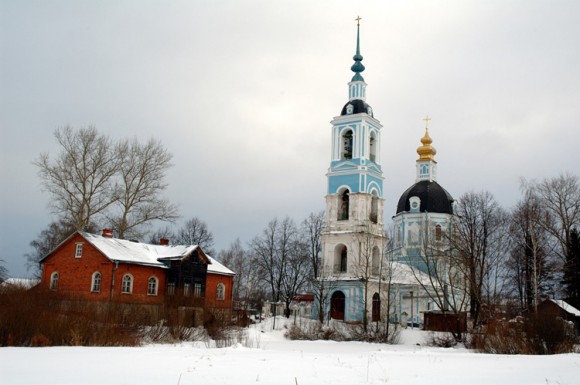 The Church of the Entrance of the Holy Theotokos into the Temple in Dmitrov was the last place of Hieromartyr Constantine Pyatikrestovsky’s ministry. Photo: sobory.ru

“Priests Are Not The Issue, It is Something Else” 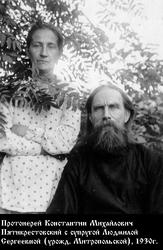 Archpriest Constantine was arrested on November 26, 1937, and put in the Taganka Prison in Moscow. At the same time, fourteen priests and a deacon of the Dmitrov cathedral were arrested.

“The investigation testifies that you have expressed hostile views in relation to the Communists. Do you admit this?”

“I have not expressed hostile views in relation to the Communists.”

“Do you plead guilty to conducting anti-Soviet activities among the population?”

“I do not admit guilt to anti-Soviet agitation. But I did say: ‘It is time for the Bolsheviks to realize that priests are not the issue, it is something else. Do they really not understand that priests do no harm to the authorities?’ In private conversations I have stated: ‘The Orthodox faith and faith in God in general will not end with the imprisonment of priests and with the closing of churches – it will not end, this faith, because it is immortal.’ Moreover, I said that the Bolsheviks do not fight with religion in an ideological manner, but in a violent way by arresting clergymen, but that the situation has not changed for the better by violence and arrests.

The “investigation” ended quickly. One day Matushka Ludmila and her son came to deliver a package to her husband in prison, when she was told that “all priests” had been taken away the night before.

On December 5, 1937, a NKVD Troika made an accusation of “anti-Soviet activities and agitation” against Fr. Constantine, sentencing him to ten years in correctional labor camps. Later a witness of those events, a deacon from the Dmitrov cathedral, said: “All the prisoners were brought together… young people appeared with scissors and razors and, mocking and sneering at them, cut their hair, shaved them, and stripped them of their robes.” Archpriest Constantine was sent to the Mariinsk camp, where timber was harvested. 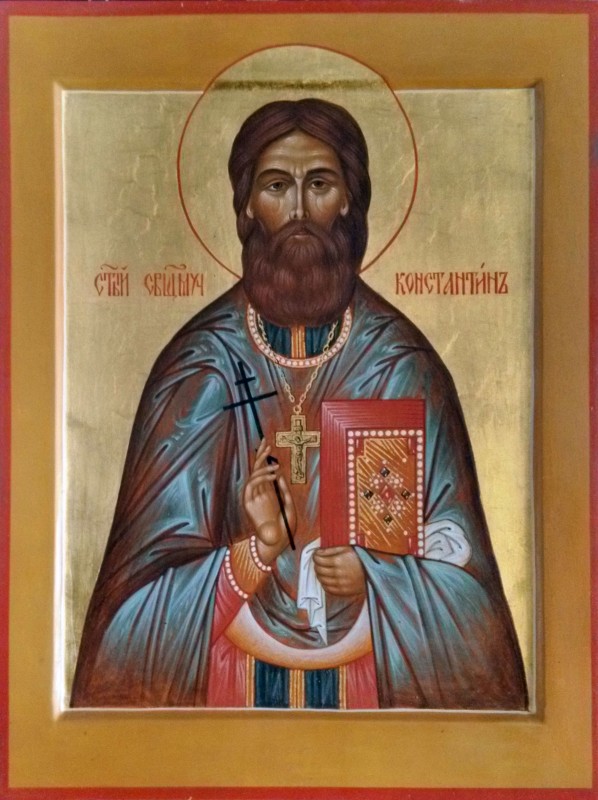 Correspondence was banned, but one day Fr. Constantine managed to throw a note for his wife above the gate – a little paper square. A kind person took it and sent to the written address. Fr. Constantine was unable to sent any more letters home.

In summer, Ludmila Sergeevna received the message of the death of Fr. Constantine in prison. According to the available information, Fr. Constantine reposed on March 6, 1938.

An in absentia funeral service was held in the Entrance of Theotokos Church on July 6, 1938. In 1959, Fr. Constantine was completely vindicated by the Soviet authorities.

In 2000, the Council Bishops of the Russian Orthodox Church numbered Archpriest Constantine Pyatikrestovsky among the New Martyrs and Confessors of Russia.