Hitting the Wall – What happened with St. Mary of Egypt? 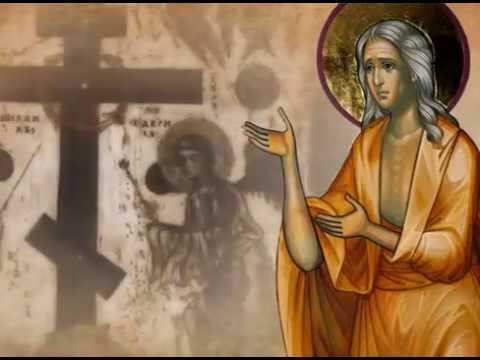 The expression “Hitting the wall” refers to an athlete‚ usually a marathon runner or cyclists that during a race they deplete their muscles glycogen reserves and they experience sudden loss of energy and extreme fatigue. In other words they can’t go on with the race‚ they’re stuck.

This is what happened with St. Mary of Egypt in the church in Jerusalem when she was stopped by an unseen wall to enter the nave. It was like all her spiritual “glycogen” has ran out and there she was‚ unable to take one more step and enter the Church. Of course you are going to tell me it was God who stopped her because she was unclean‚ and living in terrible sins. That too‚ you are correct. But in the same time her soul had ran out of fuel. Wanting to move towards God she found herself there‚ paralyzed‚ unable to do anything. Yes‚ even in the multitude of her transgressions she still had that little spark of divinity that lingers‚ buried deep  even in the greatest of sinners. She heard the call‚ but yet she couldn’t do move.

“Your prolonged polluted state  with all your prior defilements  like a wall prevented you  from beholding the August holy sites of Christ.”

She realized‚ like waking from a bad dream‚ that she was on the verge of committing spiritual suicide. Her soul was torn‚ exhausted‚ cut-off from the source of power and purposely depleted of the last drop of true life.

We are all like this in a way; we all are athletes in training for the kingdom of heaven; either we want it or not‚ either we prepare for it or not‚ we have to run the race of our lives and cross the finish line that is the meeting with our creator. And‚ just as St. Mary of Egypt‚ hit the wall at times. It does not have to be exactly like her‚ it doesn’t have to be a miraculous experience‚ but it is real and we all know when it happens.

Just as Mary of Egypt we have two choices: stay down do nothing‚ or act about it. Mary chose the latter‚ she asked the Great Intercessor‚ the Theotokos‚ to give her strength‚ to support her in this time of need. And she received everything‚ plentifully. She understood at that moment that something has to change‚ that her insatiable need for pleasing the body had to stop‚ that spiritual quests are not entertained by indulgence‚ but by the rigors of spiritual exercise‚askesis as the Greeks call it. She realized that the race is far from being finished‚ that she is merely at the beginning and from now she needs to fortify her spiritual powers and overcome the shortcomings of her fallen nature:

“With self- control and supplication‚ you practiced asceticism beyond the measure of human nature. Therefore you were exalted in Christ‚ through way of life and practice.”

St. Mary’s way can be our way. We don’t have to have a “saint “gene to act like one. The difference between athletes is not necessarily the given talent. Any good coach could tell you that success is only 10% talent and 90% sweat. God has given us all the talent we need to run the race; but if we waste it on things that “do not build-up” ‚ didn’t we spend the gift in vain? Here is the real truth:

The Kingdom of God is not food and drink‚ but righteousness and ascetic practice and holiness;

By training ourselves we’re not just going to run the race but we will be able to fly across the finish line as St. Mary walked above the waters of the Jordan.

And you shone forth to such an extent that you were able to fly across the waters‚ O blessed one‚ and levitate above the ground  when you raised your hands up to God in prayer.

Most Holy Mother Mary pray to God for us! 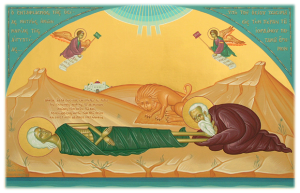 Master Yourself; Love and Serve Your…
Archpriest Antony Hughes

We are not the waves and the wind, we are the ocean's depths. We are not… 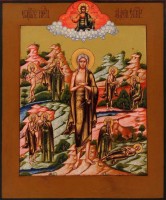 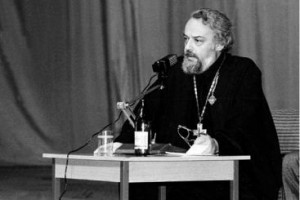 Why Did the Lord Single Out…
Archpriest Alexander Men (+1990)

Each of you knows that when we do not have any particular needs, when everything is…