Why Did the Lord Single Out Mary of Egypt?

Each of you knows that when we do not have any particular needs, when everything is just fine, our prayer begins to grow cold and barely to flicker; we have to force ourselves to rise in prayer. On the contrary, when in desperate circumstances – when in illness, difficulties, and trials – then there are claps of thunder and signs of the cross. This means that it appears that only need prompts us to pray.
Archpriest Alexander Men (+1990) | 04 April 2012 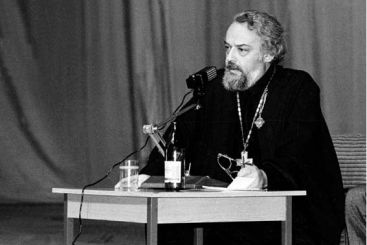 On the fifth Sunday of Great Lent the Church celebrates the memory of St. Mary of Egypt, the holy ascetic struggler, who is an image of the deep and sincere repentance that brings forth great fruit.

All of you will remember her life. You will recall that her youth was spent in wantonness; that she was a harlot, a courtesan, a fallen woman in a large and depraved city in Egypt; and that she went from being a great sinner to a saint. Yet, regardless of such a manner of life, there was likely some Godly spark in Mary’s heart attracting her to God. She did not understand that she was not living as the Lord’s law or conscience demand. She thought that she was not hurting anyone.

Once a large ship with pilgrims and believers was leaving for the Holy Land, and Mary decided to leave with them. At first it did not even occur to her that this would be a pilgrimage to the holy places. She simply wanted to enjoy herself with the people who were leaving for a journey by ship.

It was in such a mood that she sailed, landed at the shore at Jaffa in the Holy Land, and left for Jerusalem with the crowd of pilgrims. People by the hundreds and thousands were walking in file to the Church of the Holy Sepulcher to venerate the place where the Lord’s Cross and Tomb, to which His Precious Body had been taken, had once stood.

There were merchants, princes, soldiers, townspeople, and peasants – people of different nationalities speaking many different languages. This entire crowd, colorful and diverse, poured into the Church of the Resurrection. And Mary went with them. But when she reached the gates, some kind of force drove her back, not allowing her to enter. At first she thought the crowd was simply preventing her from entering, but then she became convinced that everyone, both man and woman, who was walking beside her eventually made it into the church, while she continued to remain at the threshold. Ten minutes, half an hour, an hour passed in this manner – and some unseen force continued to prevent her from entering the church.

It was at this moment that everything took place within her: she understood that she was unworthy to cross the threshold of the House of God and that the Lord was blocking her path. It was then that her life in repentance began.

Mary completely changed her manner of living, remaining in the Holy Land to atone for her sins. But you cannot help but ask: Why did the Lord stop namely this woman with such an extraordinary sign, but does not stop us? Why did crowds of people go in, among whom were certainly sinners – some of whom may have been even greater sinners than this poor Egyptian courtesan and harlot? She may have fallen into this position through poverty and thoughtlessness. Why was she alone stopped? Why did God choose her? Hand to heart, each of us will think that this power should have cast us from the threshold of the church, too, for we also are unworthy to enter due to our sins. 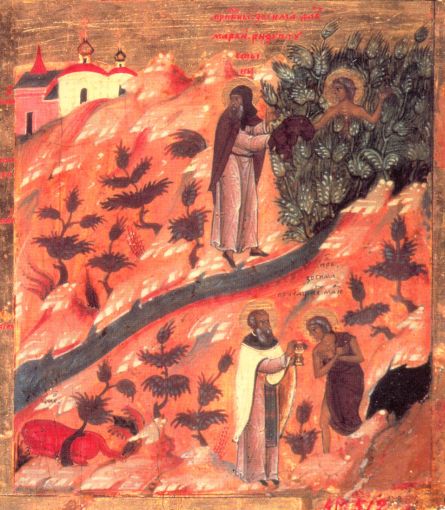 There is no direct answer in her life, but we can guess at what the case was here. Why was she chosen? It seems it was because within this ignorant, fallen, young, unfortunate woman was a great soul. The Lord took note of her, stopping her to awaken her conscience. She wanted to come and venerate the Holy Sepulcher in the simplicity of her heart, a heart which may have seemed corrupt, but which was in fact pure in its depths. She did not ask anything of God, only desiring to come and stand before the place of His Golgotha. Probably thousands of people had gone there to pray: one for health, another for riches, a third for success in his affairs, a fourth to pray for his children – everyone has his own needs. But she asked for nothing, only wanting to draw nearer to the Lord, and what hurt her most was that even this was forbidden her.

This should lead us to an important thought. Although the Lord does command us: Ask, and it shall be given you, the most important thing is still to ask God not that He give us His gifts, but rather that He Himself – His power, His grace, and His love – be with us.

Today we read in the Gospel [Mark 10:32-45] about how two disciples, shortly before the crucifixion, imagining that glory and honor awaited the Lord, asked that He would place them to the right and left of His Throne. If they had sensed what the Lord was then undergoing, as He was nearing the place of His suffering, they would not have posed such a question to Him. But they were busy with their own dreams and desires and so they asked. Are we not the same when we stand before the Cross of Christ appealing to the Lord only for what we need?

Each of you knows that when we do not have any particular needs, when everything is just fine, our prayer begins to grow cold and barely to flicker; we have to force ourselves to rise in prayer. On the contrary, when in desperate circumstances – when in illness, difficulties, and trials – then there are claps of thunder and signs of the cross. This means that it appears that only need prompts us to pray. This means that if we were to achieve everything people normally dream about – health and success, prosperity in family life and work – then perhaps we would not rise to pray. Having thanked Him coldly and distractedly, we would soon forget about it. Yes, this is what happens, which we all know from our own bitter experience. This is what happens…

But here is Psalm 26, which we often repeat: The Lord is my light and my saviour; whom then shall I fear? This is being said about people who sought the Lord Himself because they did not need anything more on earth. This is the most important thing: to love the Lord God with all one’s heart, with all one’s thoughts, and with all one’s strength. Seek My face, says the Lord through the Psalmist. This means: seek not only the gifts I give you, but seek Me. Love for Christ is the foundation of our spiritual life. Without it, we would be like pagans who go to their gods to get what they need for today.

Our prayer must be free of self-interest. We should indeed ask, just as a small child asks his mother – but the child also loves his mother. He does not just reach for the hand that gives presents or whatever else is needed. The child reaches out to his mother because she loves him, and because he loves her who gave birth to him and bore him in her arms.

Our prayer should be exactly like that! Not just to see the Lord’s giving hand and reach for it, but to see the Lord Himself, Who should always be before us – as if crucified before our face.