Master Yourself; Love and Serve Your Neighbor: On the Sunday of St. Mary of Egypt

Source: St. Mary Orthodox Church
We are not the waves and the wind, we are the ocean's depths. We are not the clouds, white and fluffy or dark and threatening, we are the deep, blue sky. That is who we are. There is stillness in us, a place of calm and quiet. Joseph Campbell wrote, “Find the immovable center and you can survive anything.” The spiritual life is about finding that center and learning to remain there.
Archpriest Antony Hughes | 06 April 2014 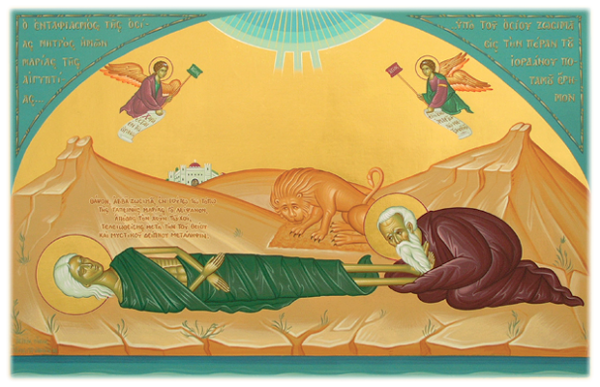 And they were in the way going up to Jerusalem; and Jesus went before them: and they were amazed; and as they followed, they were afraid. And he took again the twelve, and began to tell them what things should happen unto him, Saying, Behold, we go up to Jerusalem; and the Son of man shall be delivered unto the chief priests, and unto the scribes; and they shall condemn him to death, and shall deliver him to the Gentiles: And they shall mock him, and shall scourge him, and shall spit upon him, and shall kill him: and the third day he shall rise again. And James and John, the sons of Zebedee, come unto him, saying, Master, we would that thou shouldest do for us whatsoever we shall desire. And he said unto them, What would ye that I should do for you? They said unto him, Grant unto us that we may sit, one on thy right hand, and the other on thy left hand, in thy glory. But Jesus said unto them, Ye know not what ye ask: can ye drink of the cup that I drink of? and be baptized with the baptism that I am baptized with? And they said unto him, We can. And Jesus said unto them, Ye shall indeed drink of the cup that I drink of; and with the baptism that I am baptized withal shall ye be baptized: But to sit on my right hand and on my left hand is not mine to give; but it shall be given to them for whom it is prepared. And when the ten heard it, they began to be much displeased with James and John. But Jesus called them to him, and saith unto them, Ye know that they which are accounted to rule over the Gentiles exercise lordship over them; and their great ones exercise authority upon them. But so shall it not be among you: but whosoever will be great among you, shall be your minister: And whosoever of you will be the chiefest, shall be servant of all. For even the Son of man came not to be ministered unto, but to minister, and to give his life a ransom for many.

One of the very first things we learn as we begin to pursue the spiritual life is that everything we can see and touch is temporal.  Everything is changing and everything that changes eventually passes away, including us.  There is no security or lasting happiness in anything that passes away so it makes no sense to attach to them as if there is.  Trying to hold on to temporal things is like trying to carry water in a bucket filled with holes or trying to our satisfy thirst with sea water.  A good deal of suffering has its origin in the vain pursuit of the perfect relationship, the perfect job, the perfect house, the right perfume.  We never find them, but in the event that we think we do, at some point they no longer satisfy or disappear altogether.

James and John sought to ensure their own security and happiness in the Lord’s coming kingdom, but they did not understand what they were asking for.  The greatest in the kingdom, Jesus taught, would be the least among the brethren, the most humble, not the most exalted and powerful.  As all of them would learn in the coming days, Jesus leads from the throne of Extreme Humility, that is, the Cross, and not from a throne of earthly power.  What James and John were asking for they would not really want.  They were asking to share in the humiliation and death Christ would suffer and Jesus assures them that they would.  But to sit at his right and left hand was not his to promise.

So many misunderstood who Jesus was and what he meant when he was on earth. The Zealots wanted Jesus to assume political power and restore the kingdom of David in an earthly empire that would rule with the Jewish equivalent of sharia. Many zealots in our time and a good many in our Church are falling into the same temptation and making the same mistake.  They believe our Church should become a central combatant in their so-called “culture wars” and align with politicians and political parties in an attempt to impose Christian values on this multicultural and pluralistic society with the heavy hand of a Christian form of sharia.  About this Jesus had something to say:

“You know that those who are supposed to rule over the Gentiles lord it over them, and their great men exercise authority over them. But it shall not be so among you…”

This shall not be so among you!

Metropolitan Anthony Bloom (and I am most grateful to my brother Fr. Robert Arida for pointing this out in his remarkable sermon on the Cross), “It seems to me, and I am personally convinced, that the Church must never speak from a position of strength. It ought not to be one of the forces influencing this or that state. The Church ought to be, if you will, just as powerless as God himself, which does not coerce but which calls and unveils the beauty and the truth of things without imposing them. As soon as the Church begins to exercise power, it loses its most profound characteristic which is divine love [i.e.] the understanding of those it is called to save and not to smash…”

Mary of Egypt’s pilgrimage in the desert was the opposite of the call to worldly power and happiness.  She left everything behind to reconstruct her life through absolute abstinence and self-denial.  She sought not to master others, but to master herself.  In fact, that is the rule we must follow:  master yourself; love and serve your neighbor.

So, Christ tells us “Do not labor for the food that perishes, but for the food that endures to everlasting life.”   And “seek first the kingdom of God and His righteousness”.  Don’t attach to things that are dying, but to things that are undying.  Since the kingdom of heaven is within, that is where we must search.  Matthew the Poor, the great Egyptian monk and ascetic, wrote that the only place we can meet God is within.  It is a theme throughout the writings of the Orthodox spiritual writers.  When we begin to turn within to discover what is there, after a while we discover a great secret: we discover that there is something within us that is also undying!  The core and center of who we are is undying and unchanging: the image of God and the Kingdom of heaven.  Here are a couple of illustrations of how we can utilize this truth in our daily lives.

The deep, blue sky is always still and serene even when thunderheads gather and lightening and thunder crash.  Even hurricanes have no power to change the sky.  Storms come and go leaving no lasting impression on the deep, blue sky. Eventually, storms pass, but the serenity of the sky remains unchanged.

We are not the waves and the wind, we are the ocean’s depths.  We are not the clouds, white and fluffy or dark and threatening, we are the deep, blue sky.  That is who we are.  There is stillness in us, a place of calm and quiet.  Joseph Campbell wrote, “Find the immovable center and you can survive anything.”  The spiritual life is about finding that center and learning to remain there.  It is nothing less than the kingdom of heaven.  This is what Mary of Egypt discovered.  When the storm of her lust subsided, she became still and serene like the depths of the sea and the deep, blue sky.  How else could she have survived all those years in the desert?

Through this divine discovery we become like yeast hidden in a loaf of bread.  The whole world is blessed by our experience of the Grace of God. Leaving behind our dysfunctional ways of life, cleansing our hearts, rewiring our brains, putting on the mind of Christ, our lives begin to mirror nothing less than the Divine Life that already exists within us and the benefits we gain for ourselves reverberate  for everyone else.  We serve the world by serving the Lord and laying down our lives for all.  Fr. Paul Tarrazi wrote that “we are called to do more than love those who hate us, we are called to love those we hate.”  No where are we commanded to rule like autocrats over anyone.  We are called to love and to serve from the center, from the heart.

God gives humble people grace, which helps them overcome the difficulties of…

Why Believe? Because belief in the Divine not only helps us understand who we…