Source: DECR
Natalya Mihailova | 06 July 2017
On July 4, 2017, His Holiness Patriarch Kirill of Moscow and All Russia met with the Minister of Foreign Affairs and Trade of Hungary, Mr. Péter Szijjártó. Attending the meeting, which took place at the Patriarchal and Synodal resident in St. Daniel monastery were Bishop Tikhon of Podolsk, administrator of the diocese of Budapest and Hungary; Bishop Antony of Bogorodsk, head of the Moscow Patriarchate’s Administration for Institutions Abroad; Archimandrite Philaret (Bulekov)(, vice-chairman of the Moscow Patriarchate’s Department for External Church Relations (DECR). 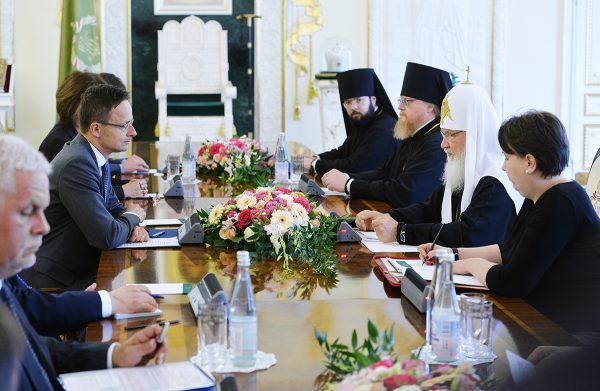 His Holiness Patriarch Kirill, who visited Hungary many times as the DECR chairman greeted the guests and recalled his trip there in 2011 when the country celebrated the m millennium of Christiany. He noted the recent active development of relations between Russia and Hungary, including contacts among common people. For instance, even more Russian people are visiting Hungary to see its wonderful architecture and landscapes, to have rest and medical treatment. Good attitude of the Hungarians to Russian tourists is especially important.

His Holiness continued to say:

“The Russian-speaking diaspora in Hungary is an important factor that affects development of relations between our countries. People, whom we call compatriots, are Russians, Ukrainians and representatives of many other nationalities. Most of them are members of the Russian Orthodox Church. They can realize their religious rights and meet their religious needs as there are twelve parishes in the Moscow Patriarchate’s diocese of Budapest and Hungary. I would like to thank the Government of Hungary represented by you for benevolent atmosphere for the work of our church institutions in your country.”

His Holiness added that the Russian Church maintains traditionally friendly relations with other Christian confessions in Hungary, mainly with the Catholic and Reformed Churches.

His Holiness recalled Bishop Károly Tóth who was the head of the Reformed Church at that time and general secretary of the Christian Peace Conference. His Holiness stressed:

“During the cold war we worked for the keeping of relations between East and West, and even theological dialogue helped Christians understand that we all share one and the same system of values. As to the attitude of the Russian Orthodox to the West, their good feelings were based on common values.

“That was a paradoxical situation as there were no common values with representatives of the Communist party in our country, while we had common values with Christians in the West and with Western Christian culture. There appeared ideas of common Europe from Lisbon to Vladivostok. That is why the Orthodox in Russia are too sensitive to the dismantling and removal of Christian values from the life of the Western world. We cannot consider the deviation from Christian principles and Christian moral as a value. We cannot take as a norm the fate of the little Charlie Gard who is being deprived the right to life. Also, we cannot consider same-sex unions as a common value and many other things that run contrary to Christian ethics”

“I believe that the conflict of values is the main one of all existing conflicts between East and West and provokes tension of relations between them.”

“We respect the provisions of the Hungarian Constitution of 2012 which say that God and Christianity unite the Hungarian people, describe marriage as a union between man and woman and say that human life begins with conception.”

His Holiness also emphasized the importance of Hungary’s position on the protection of Christians in the Middle East and spoke about his numerous visits to the region at the time when one million and a half Christians lived in the north of Iraq, while there are only one hundred and fifty thousand of them at present. I consider it the civilizational tragedy. While in Damascus I celebrated divine services and met with many people even in the streets, including Muslims and Christians who spoke of their fear of upsetting the balance between Christians and Muslims because of the war. We see the reality of these fears in the regions occupied by terrorists.

“We live in troubled times, but as Christians we must never lose hope. Christian Churches must make special efforts for the sake of achieving peace and justice,” the Primate of the Russian Orthodox Church said.

Minister Péter Szijjártó thanked His Holiness for the meeting, conveyed to him best wishes from the Prime Minister Viktor Orbán and expressed his hope for Patriarch Kirill’s visit to Hungary next year. Minister Szijjártó underscored the importance of the development of the state-to-state, political, cultural and economic relations between East and West and of good relations between people of different countries.