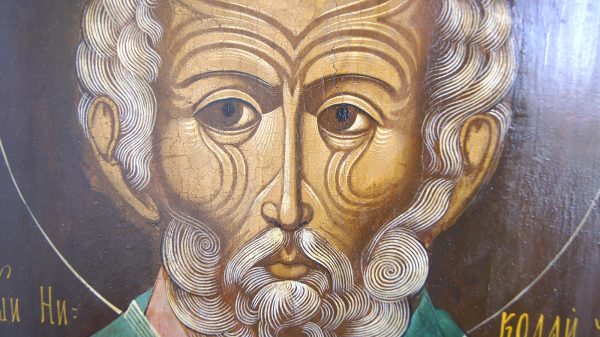 I saw Santa Claus again this year at the VA Medical Center where I work. He was wearing his red coat trimmed in white fur and wearing his peaked hat. He was tall and thin and African-American. He had no beard and he walked with quite a spring in his step.

As he neared me, he greeted me and asked me whether I had been naughty or nice. I waggled my hand and I said, “a bit of both.” And he laughed, but his belly was not large enough to shake like a bowl full of jelly. And he said to me, “it does not matter, I love you and I will be bringing you gifts.” As I walked on, I realized that now I, too, was walking with a spring in my step.

And, as I went on my way, I found myself thinking that here was a true presentation of the original Saint Nicholas from the fourth century. Here was one who was not coming to give gifts, but to bring joy and happiness, to ease the heart, and to comfort the weary. We need more Santa Clauses like the one that I met today at the VA.

Merry Christmas, and as Tiny Tim was reputed to have said, “God bless us, everyone.”