In the Hermitage of Humility: the Figure of an Elder 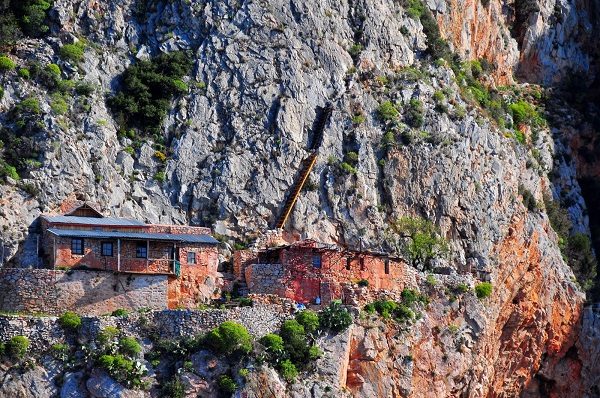 We’ve come to associate the great Elders almost exclusively with monasteries, and particularly with the Holy Mountain, even though great figures among the clergy, preachers or even ordinary parish priests are often men of virtue, a real light for their flock. I shall attempt here to sketch an outline of the figure of one such, and will refer to some of his teachings.

I should first explain that the priest in question came to our area to serve, although he was originally from somewhere else[1]. He told me that he’d first been a preacher at a very popular place of pilgrimage, which was visited by many people and, naturally, there was the prospect that he’d gradually be promoted to the priesthood. One day, however, he was met by the church wardens of the metropolitan church in our town, who told him that we were like ‘sheep without a shepherd’. It’s true that we’d never had a single educated preacher in our region, so there were no sermons. The area’s very poor, with a lot of residents who hadn’t even finished primary school. There was no religious education, and confession was unheard of. Everybody took Holy Communion without preparation, ‘just to be sure’. Even church-going Christians believed that when we die we’re ‘lost’, and a few old women told pious, but entirely inaccurate religious stories. It wasn’t long before heresies made their appearance with the Pentecostals and Jehovah’s Witnesses, through whom the devil was able to snatch souls.

The priest faced all of this extremely systematically with unfailing and invincible zeal.

I remember him literally exhausting himself by going round the villages in order to preach. Of course, he spoke in the churches, but when the heresies made their appearance he preferred to speak in the village squares so as to enlighten everyone there. He never abandoned his sermon, even if a storm broke out, though he would then hold an umbrella. He took the errant doctrines one by one and destroyed them with passages from Scripture. In this way, the heresies were unable to find fertile ground on which to spread in our area. As regards the Jehovah’s Witnesses in particular, he advised us not to let them into our homes, not to talk to them on theological matters and to refer them to our priests. He saw to it that well-known clergymen engaged in the struggle against heresies would come to our town and they would hold mass meetings.

The Elder was once asked: ‘Father, seeing as I’ve forgiven my enemy, who caused me great harm, why do I still have angry thoughts about them? Does it mean that I’m vindictive?’ The Elder replied: “No. These thoughts aren’t, in fact, yours, but come from the devil, who doesn’t want us to feel calm. He’s particularly hard on us like this, if he knows that we have a sensitive conscience’. Discretion is necessary everywhere.

I once mentioned that when others insult me, I try to forgive them, but I’m saddened and upset by what they’ve said. He then told me: ‘Don’t be distressed at all, because this isn’t human, but divine work’. And he added: ‘The whole point is this: to make an effort to truly forgive those who insult you, to pray sincerely to God for them’. In other words: ‘Learn to forgive your enemy, and don’t be concerned about the fact that, being human, you were upset. Christ will take care of the rest’. Especially concerning us lay people, the Elder didn’t want us to be over-hasty in taxing ourselves ascetically .

If, as a Christian, you have to be kind and compassionate towards others, how much more so must you feel for your child. This is the reason why the Elder was explicitly against abortions, even in the event of rape. If that were to happen, then the best thing would be for the mother to keep the child that was born. If, however, she can’t bear the social stigma and condemnation, she can give the child away to some kind of institution, so that couples who can’t have children can adopt one.

For those whose parents are seriously ill, the Elder advised that they should do whatever good and kind deed they can for their parents, to care for them lovingly, to give them affectionate attention and treat them with the tenderness they would a baby, to look after them in every possible way, and also even to ‘indulge their every whim’ so as to keep them happy. We must in every way alleviate the cross of sickness. ‘If you do this’, he said, ‘two things will happen to you. The first is that God, as He says in the Old Testament, will grant you a long life, and he will also give you a gift (that your days may be long upon the land which the Lord your God gives you). ‘What gift?’, you might ask. Only God knows, but that’s God for you, and being God His gifts are commensurate’, he added.

However, the greatest responsibility that children have towards their sick parents is to ensure that a spiritual guide comes so they can have confession and then communion (in fact, they ought to have communion often). If it happens that they pass away, we have to tell the priests to remember their names in every Holy Liturgy. We, too, must keep them in our own prayers and also give alms in their name – on their behalf. The Elder also told me that it would be better if the almsgiving were done by the person in question, when still alive, but if, after they’ve passed away, their children give alms in their name, then God accepts it out of His love for us. In this way, the souls are truly helped, thanks to all this (first and foremost, of course, being the remembrance in the Holy Liturgy).

Sometimes, usually on a Wednesday, my mother would happen to cook non-fast food, whereas I would sometimes want to fast. At first – and this was a grave mistake – I would upset my mother, and have her make me something special. Naturally, when the Elder heard what I’d done, he told me to humbly and lovingly eat whatever my mother made for me, and not tire her in any way (of course, if someone is able to make something special themselves they can, but again in such a way that won’t upset their parents). It goes without saying, that as important as fasting may be, our duty towards our parents, and generally our love towards them, outweighs this, at least as long as we’re still in their care. Later on in life we can make our ‘special’ meals ourselves.

At other times, mainly on feast days, my parents would eat very early, and, not being able to eat at such an hour, I wouldn’t join them at the table. The Elder advised me that that was wrong. I ought to sit with them at the celebratory meal, and eat a little, just to keep them company and make them feel good, and later I could eat again, normally this time.

The Elder also had a lot of respect for medicine and held doctors in high regard. Generally speaking, he believed that not only was it a sin but even suicide to refuse to go to the doctor when necessary. However, I have to admit that the Elder did not view homeopathy or acupuncture favourably, nor psychotherapy by means of hypnosis. Besides, from what I’ve read, homeopathy prescribes medicine which contains no active ingredients, as they have been diluted so many times that no trace is left whatsoever in the final concoction. The same applies to acupuncture as well, and even more so to ‘yoga’, which isn’t simply a form of ‘exercise’, but a Hindu practice. As for hypnosis, he thought there was a danger of demonic action becoming involved.

[1] The person who wrote this article did not want to reveal his personal details or those of the Elder concerned. They are, however, known to the editorial team at Pemptousia.