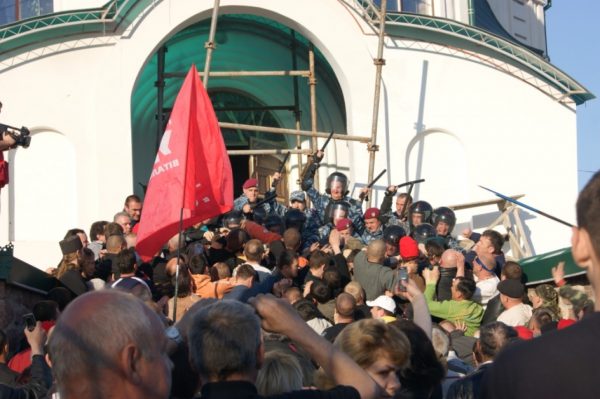 The latest development in the ecclesiastical crisis in Ukraine brought on by the nation’s two schismatic bodies and the government and radicals who support them is that the canonical Ukrainian Church is being forced to defends its right to the name “Ukrainian Orthodox Church.”

Church representatives are warning that the state wants to “deprive” it of this name because it is in canonical unity with the Moscow Patriarchate, reports the site of the Ukrainian Orthodox Church.

“According to our country’s legislation, it is impossible to duplicate the legal name or to change it,” Archpriest Nikolai Danilevich, the Deputy Head of the Ukrainian Department for External Church Relations (DECR) explained.

“It is impossible to change the name of our Church by force. No matter what laws they adopt, they will have no force, because any appellate court … will overturn such a decision. Therefore, these attempts to take our name from us are raiding, pure and simple,” Fr. Nikolai said.

Thus, Fr. Nikolai responded to the Evstraty Zorya, the speaker of the schismatic “Kiev Patriarchate,” who proposed to rename the Ukrainian Church as the “Russian Orthodox Church in Ukraine.” The same call has been made by Ukrainian nationalists many times.

“We all know what raiding is,” Fr. Nikolai said. “It is, firstly, the seizure of property, secondly the change of name, and the replacement of leadership is third. What Philaret and everyone around him now wants to do, they already tried to accomplish in 1992.”

“It was a scam of Philaret and the government then when they held the so-called ‘Unification Council’ and liquidated the already-existing charter of the ‘Ukrainian Autocephalous Orthodox Church’ and created the ‘Ukrainian Orthodox Church-Kiev Patriarchate,’” the DECR speaker said, recalling the history of the schisms in Ukraine.

“If they could change its name to the ‘Ukrainian Orthodox Church,’ they would have already done it then. But they couldn’t do it because, I repeat, it’s impossible to duplicate titles, because the Ukrainian Orthodox Church was, is, and will be. What they want to do, what they are declaring now, is an old scheme—it will be another scam of Philaret with the support of the current political authorities, if they go for it,” Fr. Nikolai explained.

At a press conference a few days ago, Zorya also encouraged the Ukrainian Parliament to adopt draft law No. 5309, reports the Union of Orthodox Journalists.

The attempt to change the Ukrainian Church’s name and the adoption of draft law No. 5309 go hand-in-hand. Bill 5309 concerns amendments to the Ukrainian law “On Freedom of Conscience and Religious Organizations’ as Regards the Names of Religious Organizations (Associations) Which are a Part of the Structure of a Religious Organization (Association), Whose Administrative Center is outside Ukraine—in the State Which, as Recognized by the Law, Committed Military Aggression against Ukraine and/or Temporarily Occupied a Part of the Territory of Ukraine.” Ukraine officially considers Russia an “aggressor state,” and thus by forcing the Ukrainian Church to become “The Russian Orthodox Church,” it can legally be treated as an agent of an aggressor state.

The passing of this bill and the renaming of the Church would forbid the Church from ministering to the soldiers among its flock. The Parliament also wants to pass bill No. 4511, “On the special status of religious organizations with headquarters located in states recognized by the Verkhovna Rada of Ukraine as aggressor states,” which proposes that such religious organizations be able to appoint metropolitans and bishops only in agreement with the governing authorities. The same bill also gives the government the right to forbid a confession if its representatives cooperate with religious centers in “aggressor states.”

A number of Orthodox hierarchs from around the world have previously spoken out against the adoption of such discriminatory laws.