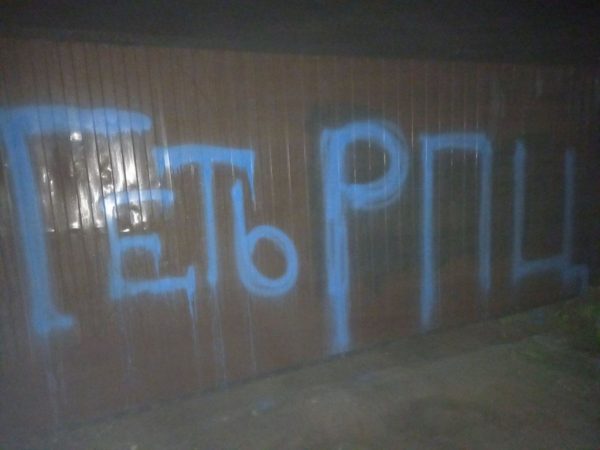 On 28th September 2020, two young men painted offensive slogans on the fence around the house belonging to Rev. Maxim Yoyenko, a cleric of the Lvov diocese, and threw paint at the trailer which the faithful use as a place of worship. One of the malefactors personally threatened the cleric. Besides, yet another act of vandalism was committed against a toy store rented by a parishioner of the Ukrainian Orthodox Church, reports Information and Education Department of the Ukrainian Orthodox Church, citing the UOC Legal Department.

As Rev. Maxim Yoyenko informed, at about 6 a.m. his family heard some rumble outside. “We checked cameras, but did not see anyone. Then a boy approached the gates and started bending the metal. We came out, began talking to him. In reply, he shouted, ‘Get out of here, you will burn!’ Then he left,” the priest said.

Later, Father Maxim discovered offensive slogans written on his fence. “At first we did not see the words drawn all over the fence, it was dark. Then we returned and checked the cameras. We saw two young people in hoods drawing something. Again they wrote, ‘Get out to ROC, Zolochiv is not Brody.’ They also threw paint and brilliant green antiseptic solution at the trailer. However, neither the paint, nor the brilliant green did not smash. We called the police,” the clergyman said.

As he also informed, that same morning offensive slogans were written on the façade of the toy store rented by a parishioner of the canonical Church. It was not the first act of vandalism against this store.

Earlier the mass media reported that in July 2020 persecutions had begun against Rev. Maxim Yoyenko in Zolochiv. Someone covered the gates of his house with offensive slogans and Nazi symbols; next to his house a veche (“popular assembly”) against the canonical Church was held. The priest himself and his family were offered to leave the city.

Later some militants, armed with hammers, destroyed the fence around the house. In early August, the Lvov National Corps claimed responsibility for the attacks on the priest’s house in Zolochiv and threatened to attack again.