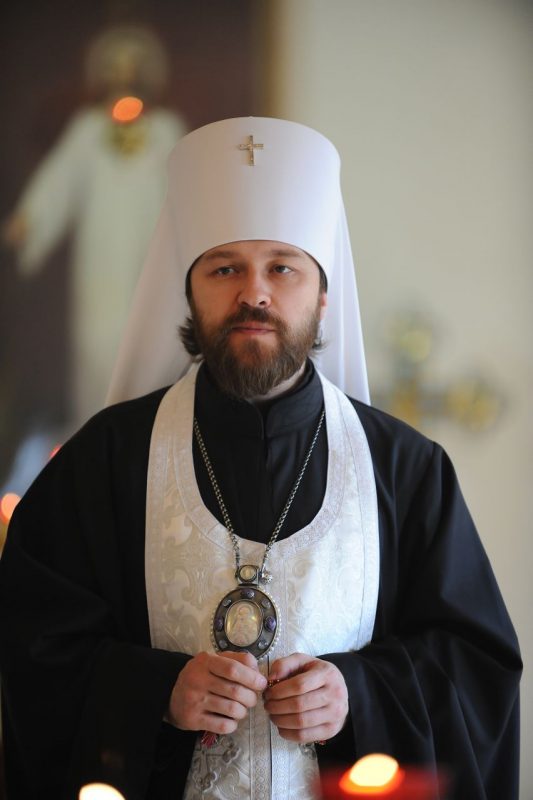 In April 2018, the Ukrainian Supreme Rada supported the initiative of the President of Ukraine P. A. Poroshenko to appeal to the Patriarch of Constantinople to establish an autocephalous Church in Ukraine. On May 14, after the Holy Synod session, the chairman of the Department for External Church Relations of the Moscow Patriarchate, Metropolitan Hilarion of Volokolamsk, stated:

This problem was not on the Synod’s agenda. However, since His Holiness the Patriarch has received numerous letters from the Ukrainian faithful, it was discussed. The Holy Synod members underscored that it lies beyond the church canonical sphere. The appeal to grant autocephaly was made by the secular authorities of Ukraine with the support of schismatic uncanonical communities. The ecclesial status of these communities, which have separated themselves from the Ukrainian Orthodox Church, is not recognized in the world Orthodoxy, that is, it has a zero status. The supreme authority of the Ukrainian Orthodox Church headed by His Beatitude Metropolitan Onufry of Kiev and All Ukraine has not addressed itself to the Patriarchate of Constantinople on this matter.

It is impossible to assume that a canonical church authority should made a decision on the basis of an initiative made by uncanonical communities or a secular authority whose interference in the internal affairs of a Church in inadmissible.

The granting of the status of a ‘parallel’ autocephalous Church to a schism despite the will of a canonical Church in whose canonical territory it is located is an ecclesiastical legal nonsense.

All the members of the Holy Synod have expressed support for the canonical Ukrainian Orthodox Church.