Metropolitan Hilarion: “It is necessary to put aside internal disagreements and unite efforts for saving Christianity “

Source: DECR
Natalya Mihailova | 06 February 2016
Metropolitan Hilarion of Volokolamsk, chairman of the Department for External Church Relations (DECR), held a press conference on February 5, 2016, at the DECR. The meeting with Russian and foreign mass media reporters was devoted to the Primatial visitation of His Holiness Patriarch Kirill of Moscow and All Russia to Latin America, which will take place from February 11 to 22, 2016, His Holiness will visit the Republic of Cuba, Republic of Paraguay and Federative Republic of Brazil. 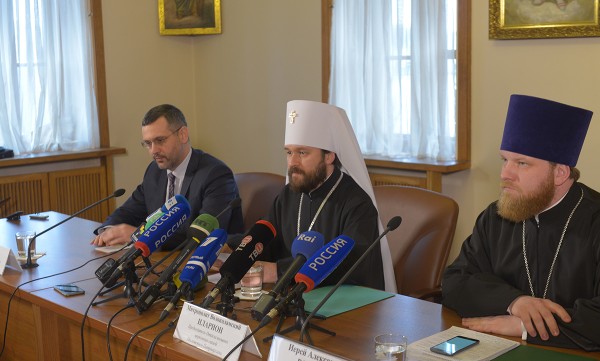 Participating in the press conference were also V. Legoida, head of the Synodal Department for Church-Society Relations, and Rev. Alexander Volkov, director of the Patriarchal Press Service.

The DECR chairman told the gathering about the forthcoming visit of His Holiness to Latin America: 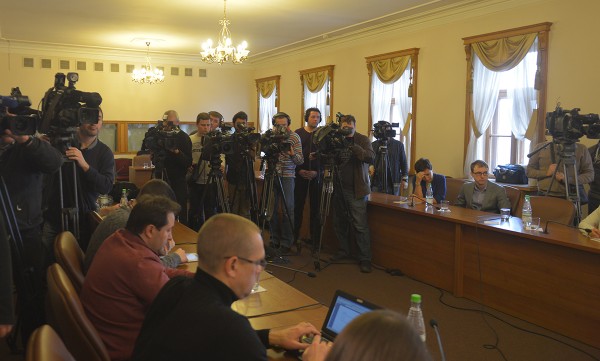 “The first point of the program will be a visit to Cuba, to which His Holiness will arrive, on the invitation of the Chairman of the State Council and Council of Ministers Raul Castro, in the evening of February 11. His Holiness Patriarch Kirill already visited Cuba in his previous capacity as metropolitan and chairman of the Department for External Church Relations and met with the leaders of the country. The building of the church of Our Lady of Kazan in Havana was directly supervised by Metropolitan Kirill and he himself consecrated it.

In 2009, President Raul Castro of Cuba invited His Holiness to visit the country now in his capacity as Patriarch. However, the need to visit sister Local Orthodox Church, as well as a great number of visits to be made to dioceses in the Russian Federation, Ukraine, Belarus, Moldova and other countries in the near abroad prevented his visit overseas. On November 17, 2011, Raul Castro for the second time invited the Primate of the Russian Orthodox Church to come to his country on an official visit. This invitation was repeatedly resumed during my meetings with Cuba’s diplomatic representatives. Last September, His Holiness decided to visit Cuba this February, timing his visit to the 45th anniversary of the consecration of the first church to be built in Havana, dedicated to the Ss Constantine and Helena Equal-to-the-Apostles. The Russian-speaking community in Cuba, which numbers 15 thousand, is looking forward to the visit of their Primate.

There will be another important event in Cuba. Because of the intersection of the itineraries of His Holiness Patriarch Kirill and Pope Francis of Rome, who will be on a visit to Mexico in the same days, it has been decided to hold a meeting between the heads of the Roman Catholic Church and the Russian Orthodox Church on the Freedom Island on February 12. The meeting will take place at Havana’s international airport.

The meeting of the Primates of the Russian Orthodox Church and the Roman Catholic Church has been in preparation for a long time. Throughout the years 1996-97, intensive negotiations were held on the arrangement of a meeting between His Holiness Patriarch Alexy II and Pope John Paul II to be held in Austria, but these negotiations were stopped because of the problems on which the agreement failed. In the first place, it concerned the actions of the Greek Catholics in Ukraine and proselytism of Catholic missionaries in the canonical territory of the Moscow Patriarchate. At the same time, the Supreme Authority of the Russian Orthodox Church has never rejected a possibility itself for such a meeting in the future when the necessary conditions for holding it will be in place.

All these years, the principal problem in the relations between the two Churches and the principal obstacle for holding a meeting between the two Primates has lied in Unia. The fact that the Uniates devastated three dioceses of the Moscow Patriarchate in western Ukraine in the 1980s and 1990s, that they moved the headquarters of the Ukrainian Greek-Catholic Church from Lvov to Kiev, that the UGCC’ mission extended to the traditionally Orthodox lands in eastern and southern Ukraine, that they supported the schismatics – all these factors only aggravated the problem. The situation aggravated further as a result of the recent events in Ukraine, in which the UGCC representatives took a direct part, coming out with anti-Russian and russophobic slogans. So, regrettably, the problem of Unia is still there, with Unia, remaining a never-healing blooding wound that prevents the full normalization of relations between the two Churches.

Nevertheless, the situation as it has developed today in the Middle East, in North and Central Africa and in some other regions, in which extremists are perpetrating a real genocide of the Christian population, has required urgent measures and closer cooperation between Christian Churches. In the present tragic situation, it is necessary to put aside internal disagreements and unite efforts for saving Christianity in the regions where it is subjected to the most severe persecution.

The Sacred Bishops’ Council of the Russian Orthodox Church, which completed its work on February 3, in Moscow, called to make the year 2016 a year of special efforts to be taken in this respect, Therefore, despite the remaining obstacles of ecclesial nature, it has been decided that a meeting should be urgently held between His Holiness Patriarch Kirill and Pole Francis of Rome. The problem of the persecution against Christians will become central at this meeting.

Throughout the recent years, numerous proposals have been coming in concerning the venue of such a meeting. However, His Holiness Patriarch Kirill, from the very beginning, did not want it to take place in Europe, since it is with Europe that the grave history of divisions and conflicts between Christians is associated. The coincidence of the date of Patriarch Kirill’s visit to Latin American countries with that of the Pope of Rome’s visit to Mexico has become an opportunity for holding the meeting in the New World, and we hope that it will open a new page in the relations between the two Churches. Along with the main topic – the situation of Christians in the Middle East and other regions in which they are subjected to persecution, the talk will also involve the pressing problems of the bilateral relations and international policy. The meeting will be concluded with the signing of a joint statement.

On February 14 and 15, His Holiness Kirill will visit the Republic of Paraguay at the invitation of President Horacio Manuel Cartes. The visit will become a historical memory tribute to the Russian émigrés who made a considerable contribution to Paraguay’s development in the 1920s-30s, by undertaking research expeditions to the regions difficult of access for studying the mode of life of local Indians and by teaching in local universities.

On February 15, the Day of the Meeting of the Lord, His Holiness the Patriarch will celebrate the Divine Liturgy at the Russian church of the Protecting Veil of Our Lady in Asuncion. Then he will the Russian part of the city cemetery to conduct the Office for the Dead. On the same day, His Holiness will meet with President Horacio Manuel Cartes and our compatriots living in that country.

His Holiness’s visit to Brazil is timed to the 95th anniversary of the day when 1217 Russian refugees arrived in Rio de Janeiro from Gallipoli and the 70th anniversary of the establishment of the Russian Orthodox Church’s diocese of Argentina and South America, in which Brazil occupies an important place.

The program will begin with a visit to the capital city of Brasilia, where His Holiness will meet with the President of the Federative Republic of Brazil Ms Dilma Rousseff. Then His Holiness will visit Rio de Janeiro to celebrate a thanksgiving on Mountain Corcovado at the Statue of Christ the Redeemer. He will also visit the Russian Orthodox church of the Holy Martyr Zinaida and meet with Cardinal Orani João Tempesta, Archbishop of Rio de Janeiro. The visit to Brazil will be concluded on Sunday, February 21, with a visit to São Paulo, where His Holiness will celebrate the Divine Liturgy at the Cathedral of the Russian Orthodox Church.

In the evening of the same day, His Holiness and his party will fly to Moscow.”

After that the speakers answered numerous questions from journalists.