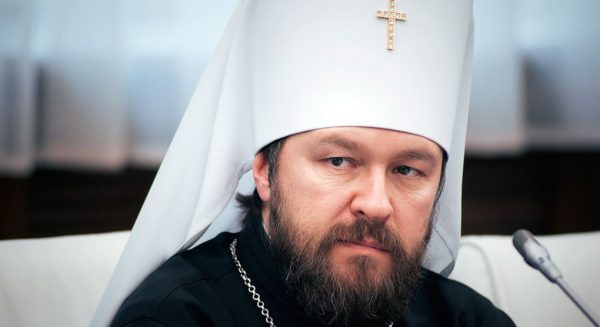 On September 8, 2018, after his interview broadcast live on the Russia-24 TV channel, Metropolitan Hilarion, head of the Moscow Patriarchate department for external church relations, made the following statement for the mass media:

‘The Patriarchate of Constantinople announced yesterday that it was sending two exarchs, that is, its special representatives, to Kiev. Today the Holy Synod of the Russian Orthodox Church has made a statement pointing to the unlawfulness of this step. The sending of exarchs (special representatives) or any other representatives to another Local Church can be done only with an agreement of this Local Church. No request whatsoever has been made to either the Patriarch of Constantinople or the Patriarch of Moscow or Metropolitan Onufry, who has been repeatedly recognized publicly by Patriarch Bartholomew as the only canonical head of the Orthodox Church in Ukraine.

This action has been undertaken in violation of church canons and it cannot remain without response. We hope that Constantinople will reconsider this decision. If it does not happen, we will have to find an appropriate decision, to take steps in response.

The Patriarchate of Constantinople states today that the appointed special representatives will work on the completion of the project for granting autocephaly to the Ukrainian Church, which was announced as far back as last April and which they want to finalize. What does it mean from our point of view? It implies, in the first place, the legitimization of the schism in Ukraine since it is only the schismatics who claim autocephaly whereas the canonical Ukrainian Church, which unites a majority of the Orthodox faithful in Ukraine (over 12 thousand parishes, over 200 monasteries) has not asked for any autocephaly, for any independence. On the contrary, the Bishops’ Conference of the Ukrainian Orthodox Church, which has just taken place, has made a unanimous decision that the status enjoyed by this Church is optimal for her. And it is the status of a self-governed Church that is part of the Moscow Patriarchate.

Because if this, I would say mean and perfidious, project is carried out, most of the Orthodox faithful in Ukraine will reject this autocephaly. The Russian Orthodox Church will not accept this decision. We will have to break off communion with Constantinople, and then Constantinople will no longer have the rights to claim leadership in the Orthodox world. Now the Patriarchate of Constantinople pose as a sort of leader of the 300 million-strong Orthodox population of the globe and the Patriarch of Constantinople is perceived as almost the Orthodox pope. But at least a half of this 300 million-strong population will no longer recognize him even as the first in the family of Orthodox Churches.