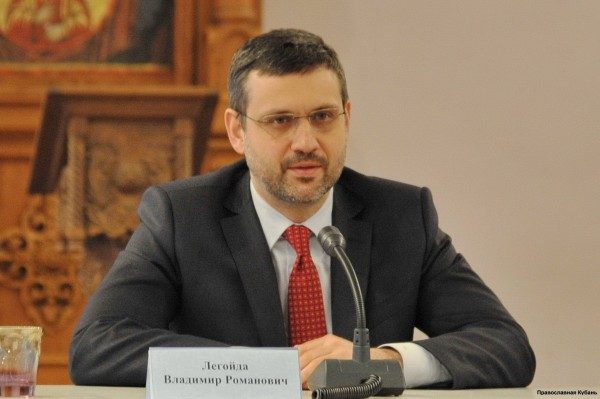 The Ecumenical Patriarchate of Constantinople on September 7 “within the framework of preparations for granting autocephaly to the Orthodox Church  in Ukraine” appointed its exarchs in Kiev, which is a canonical territory of the Moscow Patriarchate. What is behind the decision to support a separatist church and what effects on Ukraine and the Orthodox world in general it may entail is the theme of this interview the head  of the Synodal Department for the Church’s Relations with Society and Mass Media, MGIMO University Professor Vladimir Legoida granted to TASS.

— What does Constantinople’s decision to appoint its envoys to Ukraine mean?

The Ecumenical Patriarchate’s appointment of its special representatives in what is a traditional religious domain of another local Church – without prior coordination of such a step with His Holiness Patriarch Kirill, of Moscow and All Russia, and His Beatitude Metropolitan Onufriy, of Kiev and All Ukraine – means that regrettably the Ecumenical Patriarchate has embarked on the path of violating all canons, which unequivocally prohibit the bishops of one Local Church from intervention in the internal affairs of another Local Church.

— Earlier, representatives of Churches from various countries repeatedly told the media that there was no canonical way of granting autocephaly to the Ukrainian Church the Ukrainian President Pyotr Poroshenko had asked for. Were they wrong to say so and the creation of an independent church structure initiated by politicians in Kiev is possible after all?

— And what reasons has the Ecumenical Patriarchate offered to explain its actions in Ukraine?

Firstly, the Ecumenical Patriarchate says it is prepared to grant autocephaly because it allegedly has the right to do so as it regards Ukraine its canonical territory. Its hierarchs recall a letter from the Ecumenical Patriarch of Constantinople Dionysius IV, written when the Kiev Metropolitan Diocese in 1686 reunited with Moscow after a two-hundred-year split with the Russian Metropolitan District, in which the reunification was ostensibly declared temporary. This is not so. The document is clear evidence the transition was final. As for that part of the letter which says that the Metropolitan of Kiev must mention the Patriarch of Constantinople during church services means in the context of that time, let alone in the current realities, it should be unequivocally interpreted not as the right to a canonical territory but as a token of respect, and by no means as evidence of recognition of authority.

Secondly, Constantinople claims in principle it is in the position to grant autocephaly at its sole discretion. Other Orthodox Churches have shown no support for this claim. The question of granting autocephaly by consensus has been discussed by the Churches concerned many times and a coordinated procedure of this process has been formulated and agreed on. It postulates that the question of autocephaly in Ukraine can be initiated only by the Mother Church – in this particular case, by the Russian Orthodox Church and supported by all other Orthodox Churches. We see no such process.

— What countermoves may be taken by the Russian Orthodox Church, Ukraine being its canonical territory?

I will not say anything definite at this point, because there still remains some hope, albeit waning, that the red line will not be crossed and the Ecumenical Patriarchate’s actions will not force us into taking further moves. I can only say with certainty that if the decision is made and the canons continue to be violated, retaliatory measures will certainly follow and they will be rather strict ones.

— The chairman of the Department of External Church Relations, Metropolitan Hilarion, of Volokolamsk, said recently that if Constantinople granted autocephaly to splitters, canonical contacts between the Russian Orthodox Church and the Ecumenical Patriarchate may be disrupted. This looks a logical outcome, but how catastrophic it will be for world Orthodoxy? Is such a risk real in the near future?

Should autocephaly be granted, the Russian Orthodox Church will not recognize it. It goes without saying that this may entail disruption of contacts. Let me recall the situation of 1996, when Constantinople in violation of the canons issued a decree to establish the Estonian Metropolitan District of the Ecumenical Patriarchate in Estonia – a canonical territory of the Russian Orthodox Church.

In response, the Holy Synod of the Russian Orthodox Church for several months suspended canonical and eucharistic communication with the Ecumenical Patriarchate in Constantinople, and also made a decision to stop mentioning the Patriarch of Constantinople during church services in accordance with the diptych (ranking list) of heads of Local Orthodox Churches. The conflict was eventually healed, but not completely.

Such a turn of events in Ukraine would really be dramatic or even catastrophic, because our brothers in Ukraine are already in a grave position, and the situation will get still worse, if the nationalists and the authorities step up pressures on them. This will have grave, even tragic effects on world Orthodoxy and on the whole Orthodox family.

— Will the church people support autocephaly, in whatever form it may emerge today? Will the risk of aggression against the Ukrainian Orthodox Church of the Moscow Patriarchate grow, should the so-called Kiev Patriarchate be legitimized? In what way will property issues be settled? Who will take over the buildings our Church has today?

The devout flock of the Russian Orthodox Church, I hope, does understand by and large the legitimacy of decisions taken by the supreme Church authorities. We also know that other Local Churches have the correct understanding of the situation. We have repeatedly received confirmations from their heads in support of our stance. Suffice it to recall a recent statement by the head of the Serbian Orthodox Church Patriarch Irinej at the award ceremony of the International Foundation for the Unity of Orthodox Christian Nations.

As far as the legalization of the so-called Kiev Patriarchate is concerned, greater aggression in that case will be not just possible, but practically inevitable. Even in a situation where nobody recognizes them the separatists have already taken away from the canonical Ukrainian Church more than 40 churches by force. The scale of their pressure after the edict has been issued will be anyone’s guess.

There is every reason to believe that in handling such matters as the ownership of church buildings and other property the separatists will prefer to act from the position of strength, with possible connivance by the authorities. For instance, even though there was a court ruling to the effect the church building belonged to the Ukrainian Church the separatists pushed ahead with its violent seizure. I am referring to the Church of the Assumption in the village of Ptichya, the Dubno District of the Rovno Region.

I believe that the parishes of the canonical Ukrainian Orthodox Church will refuse to join the so-called Kiev Patriarchate of their own accord, and this may trigger violence by the separatists.

— Why has the Ecumenical Patriarchate in Constantinople  – one of the world’s fifteen Local Churches – has made a decision to meddle in the affairs of the Ukrainian Church, although Ukraine’s only canonical church – the Orthodox Church of the Moscow Patriarchate – has not asked for autocephaly?

This is the main issue and the greatest concern today, because the real reasons are known only to the Patriarch of Constantinople himself.

We, onlookers can merely state the fact that for some reason the logic has changed all of a sudden, that there has occurred a deviation from the path of commitment to the canons, evangelical peace and assistance to people towards catering to political ambitions, in the first place, those of the Ukrainian political authorities, which clearly will not remain in their current shape after the  elections under any circumstance. Hence such haste in dealing with church affairs.

Why has such logic prevailed? I believe that a great variety of factors are involved. Certain external influences on the Ecumenical Patriarchate should not be ruled out. Patriarch Bartholomew himself complained about attempts by the flock in the United States and US political circles to exert pressure on him.

— What are the likely scenarios further events may follow? Is it the Churches or the politicians that they depend on to a greater extent?

All scenarios have been discussed already. Our main hope is Constantinople will stop one step away from the irreparable, although for the time being the logic of its actions points in the opposite direction. We do hope that Ukrainian politicians will heed the voice of reason. They should realize that instead of obtaining desirable political dividends they will plunge their country into still greater chaos.

The solution of this problem depends on everybody, but in the first place, on the Ecumenical Patriarchate of Constantinople. The Holy Synod of the Russian Orthodox Church said so quite clearly in its statement of September 8, 2018. This statement ends in these words: “… all responsibility for further anti-canonical actions will rest upon Patriarch Bartholomew personally and others in the Ecumenical Patriarchate of Constantinople who support them.”