Source: Union of Orthodox Journalists
Reuniting with the Russian Orthodox Church is not revenge, it is the way of life the Archdiocese of Western European parishes has chosen, His Eminence John noted.
Pravmir.com team | 05 November 2019 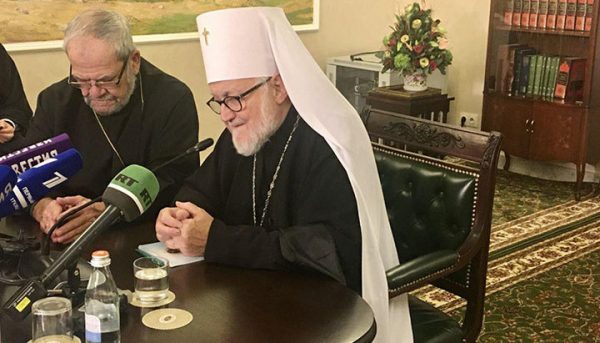 Head of the Archdiocese of Western European Parishes of the Russian tradition of the Russian Orthodox Church, Metropolitan John (Renneto). Photo: Telegram

The Archdiocese of the Western European Parishes of the Russian tradition chose the path of life when it decided to reunite with the Russian Orthodox Church, Metropolitan John (Renetto) said at a press conference on the occasion of reunification.

“The Archdiocese is marked for its missionary work. His Eminence Eulogius (Georgiyevsky) wanted the Archdiocese to become a flagship of Orthodoxy in Western Europe. <…> It’s not about revenge. There is one vision they want to impose on us. And there is a vision of the Archbishopric that has chosen the path of life. We continue to live,” Prikhod.ru Telegram channel cites his words.

His Eminence John said that Phanar was rather negative about his decision to convene a meeting (after the decision of the Patriarchate of Constantinople to abolish the Archdiocese – Ed.).

“I received a letter from Constantinople, in which I was forbidden to hold general meetings. I asked for a meeting with Patriarch Bartholomew and outlined the whole situation, saying that most parishes want to return to communion with the Moscow Patriarchate,” the head of the Archbishopric recalled. “But I was told that I had to do what I was prescribed to on January 12th – all the parishes had to join the Greek Metropolis.”

According to Metropolitan John, the Russian Orthodox Church’s treatment for the Archdiocese was completely different.

“Now is the time when the Moscow Patriarchate is able to incorporate us respecting the traditions laid down by the century-long history. The Russian Orthodox Church does not intend to rule over us, She wants to maintain our path. The purpose of our visit is to consolidate our unity. This is a very important historical benchmark,” he emphasized.

Metropolitan John also said that even more clerics of the Archdiocese are planning to join the ROC.

“Today we have preserved 60 parishes, but there are still parishes that will return to us. As for the clergy, priests, and deacons, about 90 people remained and feel determined to stay with the Archdiocese in communion with the Moscow Patriarchate. About 10 communities went to the Patriarchate of Constantinople, the others have not made up their minds yet: either to join the Romanian Patriarchate or the ROCOR,” his words from the press-conference were transmitted on the Church Today church television channel.

On November 1, 2019, the Primate of the Russian Orthodox Church signed a letter of reunification with the Western Archdiocese.