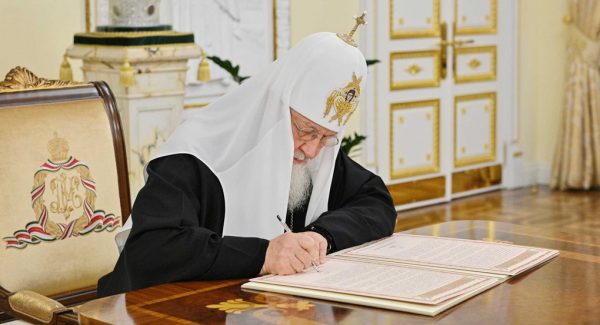 His Holiness, Patriarch Kirill of Moscow and All Russia, signed a patriarchal and synodal document restoring the unity between the traditional Archdiocese of Russian parishes in Western Europe and the Russian Orthodox Church at the Throne Hall of the Patriarchal Residence at St. Daniel Monastery in Moscow on November 1, reported Interfax Religion.

The document was signed in two copies. One is to be handed to the Archdiocese leader Archbishop John (Renneteau) on November 3, while the other will be deposited in the archives of the Moscow Patriarchate, the Russian Orthodox Church website stated.

The ceremony was attended by the head of the Department for External Church Relations Metropolitan Hilarion, the patriarchate’s manager Bishop Dionysius and his deputy Bishop Savva, and head of foreign missions Metropolitan Antonius.

The event will be marked by festivities in Moscow on November 2-4, to be attended by an Archdiocese delegation led by Archbishop Jonn (Renneteau) of Dubna.

For 90 years the Archdiocese, also known as the “Russian Exarchate” was subordinated to the Patriarchate of Constantinople, which abolished it late last year prompting it to seek new options of its canonical existence. One involved reuniting with the Russian Church.

The exarchate was admitted into the Russian Church on October 7 this year.