Mother of God and Departed 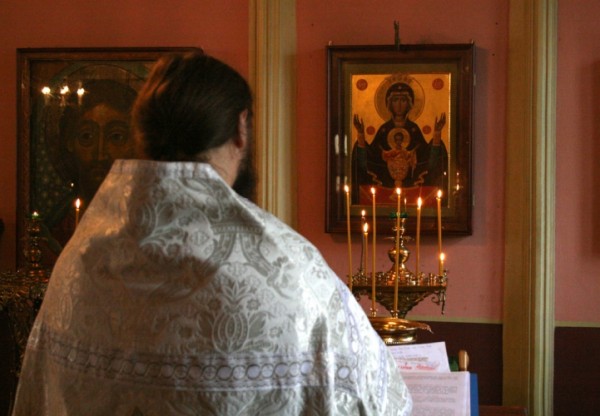 Whenever someone dear to us depart this earthly life and enters into eternity, we pray for God’s mercy, indeed, for God’s love to enfold him or her and bring him or her into the eternity of joy which is in God. But every Saturday, as on certain occasions, we pray regularly, always, for the departed, but on Saturday in a special context: we pray also the Mother of God and sing Her glory. And it is not by chance or in vain that the two prayers are intertwined.

When we pray for the departed, we do not ask God to be unjust to them and to pardon gratuitously sins, and not reject those who have rejected Him and are still unable to commune with Him before the love of God has penetrated them as the warmth of the sun penetrates the cold bodies of the earth. We pray for the departed testifying thereby that they have not lived in vain on earth, that they have, while they were on earth, kindled in our hearts a flame, a flame of gratitude, a flame of reverence, a flame of love; this flame may be small or great; it may be nothing more than the flickering light of a candle; and it can be also like the burning bush, shining with all the glory of the love of God, of His divine presence. We testify, when we pray for the departed, that we have received from them a message, a message of truth, of faith, of hope, of joy; that they have been to us a way to God, that they have opened to us a door which leads into life eternal; because life eternal consists in knowing the Living God, and we pray to Him indeed, because He is  not  the God of the dead but the God of those who live. And if  our  love can be undying, if the Old Testament could say that love is stronger than death — how much more can we say that the love of God in Christ is stronger that  anything — death indeed, among other things, because in Christ death has been defeated, hell has been harrowed, life has gushed out, sprang? out like a torrent from the Tomb of the Resurrection.

And this is why we turn to the Mother of God, both in prayer and in veneration, rejoicing that She is one of us, a woman among women, and yet — a Woman like none (for) the greatness, the perfection of Her gift of self to God, of Her transparency to God, for Her suppleness in the creative hands of God. Indeed, it is because She could believe unreseredly,  indeed heroically that the Incarnation was made possible! She is truly the Mother of Life, but not as the first Eve, the mother of all those who live on earth and are doomed one day to depart this life — No, She is the Mother of Life because She has brought into the world Life Eternal, God Himself become man, the Son of God Who in, but also through Her has become the son of man.

She also had to die, as Christ did, in total solidarity, in union with us; but She died inseparably united to the God to Whom She had given Her soul and Her body, Her life without reserve, and indeed, as we are told in one of the Church’s prayers,  the grave and death proved incapable of keeping Her a prisoner. Yes — She so communed to eternal life by Her total gift of self to God and unity with Christ, that She rose alive, and She is after Christ the first fruit of all those who have lived on earth, departed this earthly life and entered into eternity. She alone, after Christ entered it fulfilled, entered it in body and soul; we are expecting the glorious resurrection of the last day, when living souls, cleansed, renewed by repentance, by the tears of our brokenheartedness and washed in the blood of the Lamb will be reunited to bodies and stand, an incarnate humanity beyond death, beyond sin, beyond everything which is less than communion with God, as we are promised that the day will come when God shall be all in all.

And when we pray now  to  the Mother of God, and  for  the departed,  these are thoughts which are in our hearts and minds. Yes, death is overcome, and we have evidence of it in the Person of the Mother of God, and not only in the unique victory of Christ. But can we, frail, hesitant in our faith, hope to follow Her into eternity? Indeed, yes, if we learn from Her that trans­parency that allowed the light of God to shine through Her, that surrender that allowed Her to become the vessel of the Incarnation, that gift of self, heroic, courageous, self-sacrificing that allowed Her to be the Mother of our Saviour.

We must remember the words of Saint Paul, or rather of Christ spoken to Paul when he felt unable to fulfil his earthly mission and asked for strength: My grace sufficeth unto thee, My  power is made manifest in weakness — not in laziness, not in cowardice, no, but in that weakness which is perfect surrender.

Let us learn from the Mother of God   so  to surrender that the life of God may pervade us; and let us pray for all the departed who entered into eternity in a twilight that they should be enlightened, indeed, more than this: be  filled  with light, in the words of Saint Gregory Palamas, like pure crystals which obscure no light that flows through them, and yet reflect it in all directions through the many, many facets of their unique personality…

Let us hope, let us believe, let us surrender, let us learn, and give glory to the Mother of God, and to our Lord and God and Saviour Jesus Christ! Amen.