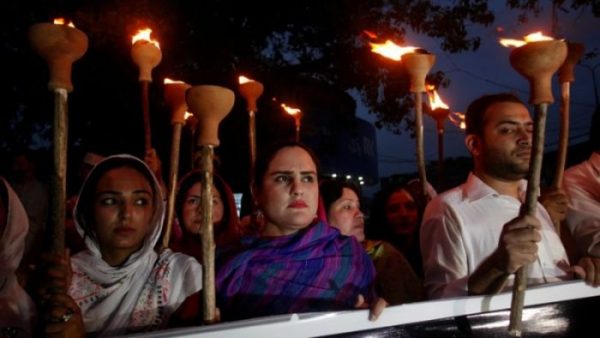 Protesters gather to condemn the killing of university student Mashal Khan, after he was accused of blasphemy, during a protest in Peshawar, Pakistan, on April 20, 2017. | (PHOTO: REUTERS/FAYAZ AZIZ)

A Pakistani Christian couple sentenced to death for allegedly sending text messages blaspheming the prophet of Islam will finally get their day in court after languishing in prison for five years.

Shafqat Emmanuel and Shagufta Kausar, from the eastern town of Gojra, were sentenced in 2014 after they were accused of sending texts insulting Muhammad to a cleric at a local mosque, according to persecution watchdog group International Christian Concern.

After five years of waiting behind bars, their case will be heard on June 25 and presided over by Judge Qasim Muhammad Khan in the Lahore High Court.

The accused couple have denied the allegations, saying that the accusation was meant to punish them over a dispute some eight months before between their children and the Muslim cleric’s children.

Pakistan, a 96% Muslim-majority country, ranks as the fifth worst country in the world when it comes to Christian persecution, according to Open Doors USA. It was also named last year by the U.S. State Department as a “country of particular concern” for religious freedom violations.