In honor of the fifth anniversary of the Patriarch’s enthronement, we have chosen twenty lucid fragments from his sermons, speeches, programs, and interviews. Continued from part three. 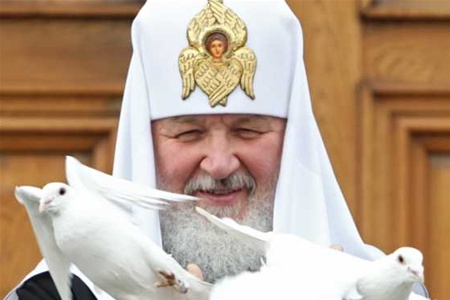 “Many can say: ‘I do not feel love. Well, not to those who aren’t my relatives: father, mother, brother, sister, husband, wife, children – and even then…’ So how can one acquire this love, so as to do good to people? No artificial act of will, no burning desire to love man, no determination to love beginning on Monday or the New Year – none of this works.

“Love comes into the heart gradually through good deeds. When we do good deeds for people, they cease to be indifferent to us, they cease to be distant from us – they become close to us. And the more we do these good deeds, the stronger love becomes in our hearts, because there is no other way and no other means of growing in love, except to perform those deeds that save us from God’s Dread Judgment.”

“We restrict ourselves in food, reducing its consumption to the bare minimum. It is not about giving up non-fasting foods, it is about moderation in food in general, because, as the Holy Fathers said, one can gorge on fasting food just as much as on non-fasting food. It is about self-restraint, through which the great truth is revealed to us that the lust of the flesh is not a predetermination, it is not an instinct, against which it is impossible to do battle. The lust of the flesh is in our consciousness, in our minds, not in the needs of our organism. Fasting allows us the opportunity to touch upon a different style of life and to recognize that not just the soul, but all the physical body flourishes in fasting. Fasting gives us the opportunity to learn the truth of the words of the Apostle and look with completely different eyes upon our purposefulness, on our aspirations, on our focuses that we construct in this life and that we seek to realize.”

“On the basis of a strong foundation of Christian values was formed not only culture, but also the spiritual and moral character of man. Christian tradition is the unshakeable rock upon which man’s moral principle can grow and bring forth good fruits.

“But if we speak about non-religious morality, it cannot be called a rock – it is shaky ground. Why shaky? Because non-religious morality does not lead the principles of moral life towards the absolute and unquestionable Principle, Which is God, but to the circumstances of life, to changing historical and cultural contexts. And it turns out that non-religious morality entails a kind of relativity of moral concepts. What today is good might tomorrow be bad. What is good for one nation might be bad for another. What is good for the rich might be bad for the poor. And we know that the relativity of morals engendered the very worst misanthropic ideology that victimized millions of people.”

(Sermon at the closing of the Fifth All-Russian Olympiad of School Children of the Foundations of Orthodox Culture. April 18, 2013.)

“I have seen in the eyes of people who have taken this step the determination to continue their mission, while all the while they, of course, have reduced their level of domestic comfort and spare time while gaining concerns that they did not have yesterday and about which they had not even given thought. All this witnesses to the fact that the adoption of a child into the family cannot be the result of some instantaneous emotional impulse. This needs to be the result of reflection, prayer, and self-examination, because they can be no turning back from this path, just as on the monastic path there can be no turning back. Putting one’s hand to the plow, one cannot look back.

“So it is very important that more and more people set out on this path. Because adopting either healthy or sick children is, of course, an act of care, an expression of mercy and love, but simultaneously an act that has a colossal impact upon the mind and soul of those who perform this act. Life ‘before” and ‘after’ are completely different and I am in some sense deeply convinced that people who manage this feat attain salvation in the Lord, because one gives so much of oneself to another being, because one invests so much love and strength, that it cannot but transform one’s inner life.”