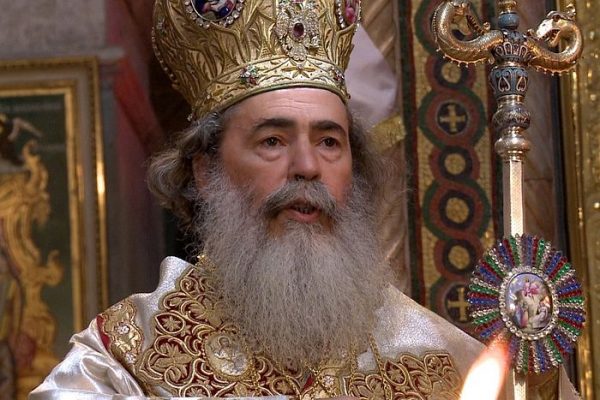 ‘The unity of the Church is a gift of the Holy Spirit, and we are called to cherish and strengthen it. Any violation of this unity is a grave crime. Using this opportunity, we resolutely condemn those who are engaged in actions aimed against the parishes of the canonical Ukrainian Church in Ukraine’, His Beatitude Theophilos III of the Holy City of Jerusalem and All Palestine state.

Addressing those present at the grand reception held in the Russian Ecclesiastical Mission on June 5, 2017, the Primate of the Orthodox Church of Jerusalem stressed,

‘It is not for nothing that holy fathers remind us that any disruption of the unity of the Church, any schism is the gravest sin… May the Holy Spirit Who descended on this day on the disciples of Christ enlighten our minds and hearts and give us strength to preserve the precious gift of the unity of the Church entrusted to us by divine providence’.

As was reported earlier, the Ukrainian Supreme Rada was to consider Bills No. 4128 and No. 4511.

Bill No. 4128 “On making amendments to the Ukrainian Law ‘On the Freedom of Conscience and on Religious Organizations’” (concerning a change in the subordination of religious organizations) proposes to introduce in the religious legislation a vague notion of ‘a person’s belonging to a religious community’ on the basis of some ‘self-identification’. Those who ‘belong to a religious community, whoever may claim this title, are to be granted a right to change the statute of the community by simple majority vote. Actually, the bill proposes to legalize the practice of fictitious ‘referendums’ with the participation of all the residents of a settlement (and, possibly, also newcomers) who claim to belong to this religious community.

Bill No. 4511 ‘On the special status of religious organizations the governing centers of which are located in the state recognized by the Supreme Rada as aggressor state’ proposes to impose on all the communities whose canonical centers are located in Russia (that is, primarily the communities of the Ukrainian Orthodox Church) some ‘special status’ that involves a considerable deprivation of human rights. In addition to the compulsory re-registration of all the communities of the Ukrainian Orthodox Church – which will inevitably provoke new captures of churches and clashes between the faithful of different confessions – the bill will give the governmental bodies of a secular state the broadest possible powers to control the internal life of religious communities, namely, to confirm the appointment of community leaders, to permit or forbid visits of religious leaders from other countries and to forcibly liquidate religious communities on a wide range of grounds.

The bills have provoked a sharp reaction in society and have received negative evaluation by Ukrainian religious leaders, secular experts and human rights advocates. Hundreds of thousands of signatures against these legislative initiatives were collected within only a few days.

In connection with this situation, His Holiness Patriarch Kirill of Moscow and All Russia has sent letters to the heads of the Normandy Four states, primates of Local Orthodox Churches, Pope Francis of Rome, UN secretary general and the secretary general of the World Council of Churches.

Stating his evaluation of the proposed bills, the Primate of the Orthodox Church of Alexandria stressed in his response their anti-church nature.

His Beatitude John, Patriarch of Antioch, on his part, has condemned the attempts to adopt in the Ukrainian Supreme Rada these bills aimed against the Ukrainian Orthodox Church.

His Holiness Irenaeus, Patriarch of Serbia, described the proposed amendments to the Ukrainian legislation as discriminatory towards the faithful of the canonical Church.

The Primate of the Orthodox Church of the Czech Lands and Slovakia has called to withdraw Bills No. 4128 and No. 4511 from consideration.

In connection with the attempts to adopt anti-church laws in Ukraine, solidarity with the Ukrainian Orthodox Church has been expressed by the Holy See.

Profound concern has also been expressed by the World Council of Churches.

On May 18, 2017, when it was planned to put these bills to the vote, thousands-strong vigil took place at the Supreme Rada’s walls. It was led by His Beatitude Onufry, Metropolitan of Kiev and All Ukraine. On that day, the consideration of the amendments to the Ukrainian legislation did not take place.

Most viewed articles
Hallowed Be Your Name: Some Grammar and A Reflection234
How to Read the Bible134
Seven-day celebrations dedicated to the Saint who helped Bucharest during plague epidemic begin on Thursday100
Holy Intercession Church in Glen Cove, NY, Celebrates its 70th Anniversary81
Patriarch Kirill Encourages the Media to Report Proper and Adequate Information about the Church81
Words from St. Isaac of Syria67
Since the Start of the Pandemic Moscow Priests Have Made Over 4,000 Visits to Patients with COVID-1959
Archbishop Peter of Chicago and Mid-America in an interview to Poltava Diocese’s press service reveals interesting moments in the life of St John (Maximovich)39
1
Most popular authors
Pravmir.com team260
Archpriest Michael Gillis234
Archpriest Lawrence Farley134
Aurelian Iftimiu100
Archpriest Stephen Freeman67
Priest Luke A. Veronis1