Group of Pilgrims of the Ukrainian Church Visit Montenegro, Albania and Serbia 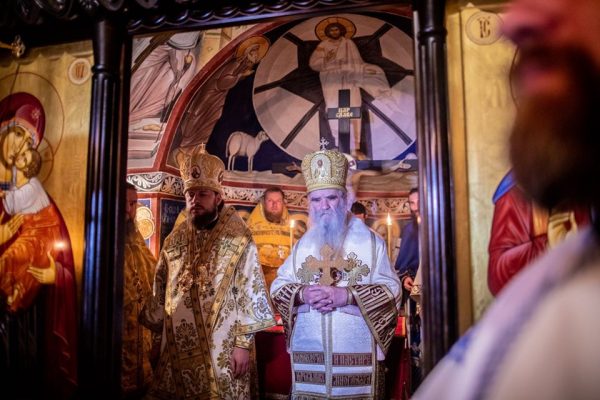 From January 24 to 30, 2020, with a blessing of His Beatitude Onuphry, Metropolitan of Kiev and All Ukraine, a delegation of the Ukrainian Orthodox Church diocese of Khmelnitskiy led by Bishop Victor of Baryshevka, vicar of the Metropolis of Kiev, made a pilgrimage to Montenegro, Albania and Serbia.

The delegation included clergy and laity from the Ukrainian Orthodox Church’s parishes, which had been affected by captures of churches in raids. The group was accompanied by Archpriest Nikolay Danilevich, deputy head of the UOC department for external church relations. The group also included Mr. V. Telizhenko, director of the UOC pilgrimage center.

On January 27, the pilgrims attended celebrations in Montenegro devoted to the commemoration day of St. Sava of Serbia. The Liturgy was celebrated at the Savina Glavica Convent near Budva by Metropolitan Amfilohije of Montenegro and the Littoral assisted by Bishop Victor of Baryshevka and local clergy and Ukrainian clergy from the pilgrims group.

Metropolitan Amfilohije delivered a sermon in which he mentioned the suffering of the Orthodox peoples of Montenegro and Ukraine. He expressed support for the Ukrainian Orthodox Church in its present hardships caused, among other things, but the anti-church actions of Patriarchate of Constantinople in Ukraine.

In his response, Bishop Victor noted that the Orthodox people in Montenegro were going through trials similar to hardships that continued to be experienced by the Ukrainian Orthodox Church. He underscored the need for continued prayer and mutual effective support between Orthodox nations.

After the liturgy, the Ukrainian pilgrims visited the St. Michael Monastery on the Miholjska Prevlaka peninsula, where they were received by the abbot of the monastery, Hegumen Benedict.

In the evening, the pilgrims took part in the many-thousands procession with the cross in Budva devoted to the commemoration day of St. Sava of Serbia.

Processions with the cross and prayer vigils are also used by Orthodox Christians in Montenegro today to express their disagreement with the parliament’s adoption of a law whereby all the churches built before 1918 should be transferred to the ownership of the state. In this connection, processions with the cross, prayer vigils have taken place in this country with its population of 630 000 people, with about 250 000 people having already participated in them.

After the procession, a solemn Svetosavska Akademija took place in Budva. Metropolitan Anfilohije and Budva Mayor Bato Carevic greeted the gathering. During the grand concert, Serbian church and folk songs were sung. Short films about Montenegro famous monasteries were screened. After the solemn Akademija, Metropolitan Amfilohije and Bishop Victor distributed gifts to children.

On January 29, the pilgrims met with the Primate of the Albanian Orthodox Church, His Beatitude Archbishop Anastasios of Tirana and All Albania. Present at the meeting were Metropolitan Nathanael of Amantias and Bishop Astios. Bishop Victor conveyed to His Beatitude best regards from Metropolitan Onuphry and told him about the visits made by the pilgrims in Serbia and Montenegro. He also spoke about the current church situation of Ukraine. During the meeting, a short film was shown to the pilgrims about the revival of Orthodoxy in Albania and development of the Albanian Orthodox Church.

Bishop Victor thanked Patriarch Irinej and conveyed him best regards from Metropolitan Onuphry of Kiev and All Ukraine, saying that His Beatitude always prays for the Serbian Orthodox Church and its Primate. “We are confident that our power lies in Christ alone. It is the power by which each Orthodox Christian lives. If we give a helping hand to one another and support in prayer and any other thing, then the Lord, too, will help us overcome all kinds of difficulties and trials which are there today in Ukraine and in Montenegro and other Local Orthodox Churches”, he said.

With reference to the UOC Information-Education Department