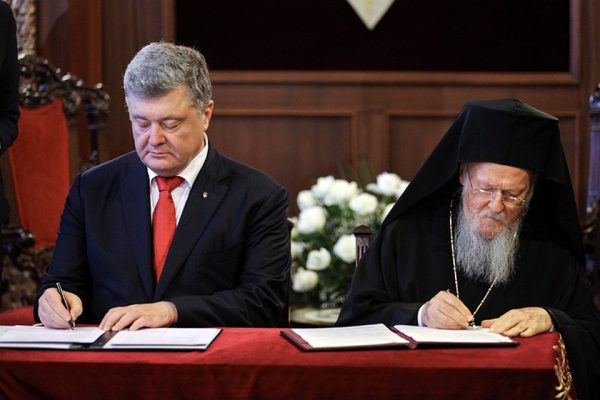 Kiev, November 3 – President Pyotr Porosnenko and Patriarch Bartholomew signed an agreement on cooperation between Ukraine and the Patriarchate of Constantinople after a meeting in Istanbul on November 3, the Ukrainian president’s press service told Interfax on Saturday.

The agreement forms conditions for “the granting of the [autocephaly] Tomos to proceed absolutely in strict accordance with the canons of the Orthodox Church,” Poroshenko said at the meeting.

He called the day historical and thanked the patriarch for the warm “meeting filled with wisdom.”

“I am sure the autocephaly decision will lead to the unity and unification of all Orthodox believers in Ukraine,” Patriarch Bartholomew said after signing the document.

“I pray to God so that I visit your wonderful country again in the very near future,” he said.

Under the document, the Ecumenical Patriarch shall grant a Tomos recognizing the independence of the Ukrainian church and hand it over to the leader elected at an assembly; the Ukrainian state will provide assistance with these processes.

The Ecumenical Patriarchate will set up a mission (effectively an embassy) in Kiev to represent its interests and foster relations between the Ukrainian Church and the Orthodox world.

Now Ukrainian bishops are to gather for the assembly and elect the leader.