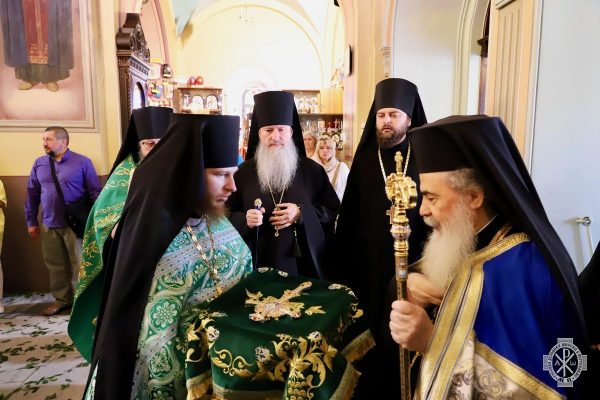 On June 17, 2019, the Day of the Holy Spirit, His Beatitude Theophilos, Patriarch of the Holy City of Jerusalem and All Palestine, traditionally presided over the celebrations on the annual day of the Russian Ecclesiastical Mission in Jerusalem, the official representation of the Russian Orthodox Church in the Holy Land.

The festive day began with the Divine Liturgy, which was celebrated by Patriarch Theophilos in the main Russian church in the Holy Land – the Cathedral of the Trinity in Jerusalem.

The service was celebrated in Russian, Greek and Arabic, with the choir of the Gorny Convent sisters singing.

After the dismissal, the Primate of the Orthodox Church of Jerusalem addressed Archimandrite Alexander, the hierarchy and clergy, as well as parishioners and pilgrims, stressing in particular that the day’s celebrations “renew our consent for the sake of salvation of our souls. It is the renewal in Christ and unity of our faith… so that, in the sacrament of the Divine Eucharist, we could point from the Holy City of Jerusalem to the fraternal churches, that is, the Zion Church renewed together with the Russian Orthodox Church watered with the blood of her new martyrs”.

Addressing the Primate of the Church of Jerusalem, Archimandrite Alexander conveyed him cordial greetings from His Holiness Patriarch Kirill of Moscow and All Russia and wished him God’s help in his hard work to preserve the truth of Orthodoxy in the Middle East. He also presented Patriarch Theophilos with an icon of St. Euphrosyne of Polotsk with a part of her relics.

Then the procession with the cross proceeded to the Russian Ecclesiastical Mission, where a festive meal was offered to all the guests of the feast.