Mike Pence: Persecution of Christians in North Korea ‘Has No Rival on the Earth’ 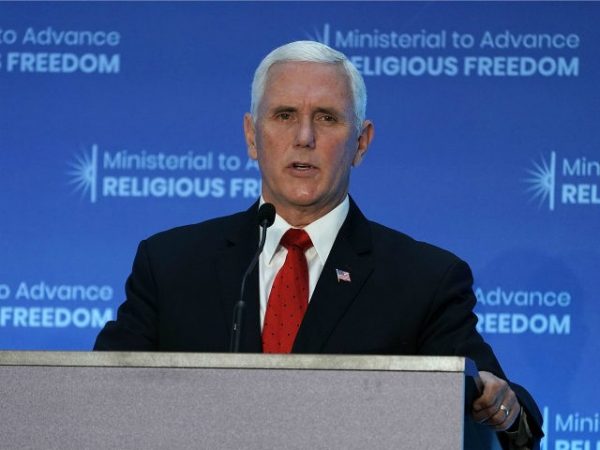 “North Korea’s persecution of Christians has no rival on the Earth,” Pence told leaders gathered in Washington, DC, for the State Department’s Ministerial to Advance Religious Freedom. “It is unforgiving, systematic, unyielding and often fatal.”

“The mere possession of a Christian Bible is a capital offense,” Pence noted, and “Christians are regularly executed or condemned with their families to North Korea’s gulags.”

Mr. Pence’s words echoed the findings of watchdog groups monitoring Christian persecution, which consistently place North Korea at the top of the list of nations where it is most dangerous to be a Christian.

This year, one such organization, Open Doors, which publishes an annual World Watch List (WWL) about Christian persecution, noted that North Korea has been considered “the worst place for Christians” for 16 consecutive years, since 2002.

In his address Thursday, the vice president said that while Americans all hope relations between the United States and North Korea will continue to improve, “there is no escaping the plain fact that North Korea’s leadership has exacted unparalleled privation and cruelty upon its people for decades,” a cruelty that has included “torture, mass starvation, public executions, murders, and even forced abortions, and industrial-scale slave labor.”

Appearing with Mr. Pence at the Ministerial was a North Korean Christian woman named Ji Hyeona, whom he met when in the region this year.

“Ji Hyeona was imprisoned and tortured simply for having a Bible that her mother had given her,” Pence said. “And after a failed escape attempt, the North Korean authorities forced her to abort her unborn child.”

“Hyeona was lucky enough to escape with her life, and we are honored to have you with us today.  Your faith and your courage inspire us all,” he said.

The vice president’s sharp criticisms of North Korea’s persecution of Christians was set against the broad backdrop of the state of religious freedom around the world and the commitment of the United States to work for its advancement.

Mr. Pence repeatedly referred to religious liberty as America’s “first freedom,” holding it up as the foundation of all other freedoms. Religious freedom “buttresses all other rights,” he said. “It provides a foundation on which a society can thrive.”

As our Founders knew, he added, “this precious liberty is endowed not by government, but by our Creator,” he said.

“The right to believe or not believe is the most fundamental of freedoms,” he stated. “When religious liberty is denied or destroyed, we know that other freedoms — freedom of speech, of press, assembly, and even democratic institutions themselves — are imperiled.”

Religious freedom is not just convenient, practical, or politically advantageous, he insisted, but goes to the heart of the dignity of people.

The United States of America “stands for religious freedom yesterday, today, and always,” Pence said, and we do this “because it is right.”

Nations that reject religious freedom “breed radicalism and resentment in their citizens,” he said. “They sow the seeds of violence within their borders — violence that often spills over into their neighbors and across the world.”

And yet, while religious freedom is always in danger under authoritarian regimes, “threats to religious minorities are not confined to autocracies or dictatorships,” he warned, but “arise in free societies, as well,” demanding vigilance to defend the first among freedoms.

As an example, Mr. Pence spoke of growing anti-Semitism in Europe, where “attacks on Jews, even on aging Holocaust survivors, are growing at an alarming rate.”

“Last year, hate crimes against Jews hit a record high in the United Kingdom,” he noted. “And in the same period of time, there were an average of nearly four attacks against Jews every day.”

The vice president announced the establishment of the Genocide Recovery and Persecution Response Program,  a new U.S. initiative to aid persecuted believers in the Middle East, as the persecution of Christians and other religious minorities runs rampant.

Under this new program, “the State Department and the U.S. Agency for International Development will closely partner with local faith and community leaders to rapidly deliver aid to persecuted communities, beginning with Iraq,” he said, which will also bring together a “vast network of American philanthropists and believers who share our desire to support our brothers-and-sisters-in-faith.”

In a powerful statement, the vice president assured his listeners that “America will always stand for religious freedom, and we will always speak out boldly wherever and whenever it’s threatened.”

“We will never lose sight of the true importance of religious freedom,” he promised. “It’s about beliefs, it’s about faith, and discovering truth, and the ability to live out that truth in one’s life.”