Sermon on the Healing of the Ten Lepers

We need to understand very well the cost of our prayers, the cost of God’s help, of His good gifts. We receive along with them an enormous responsibility, for every gift of God to man is his judgment.
Archpriest Alexei Uminsky | 17 December 2011

Then as He entered a certain village, there met Him ten men who were lepers, who stood afar off. And they lifted up their voices and said, “Jesus, Master, have mercy on us!” So when He saw them, He said to them, “Go, show yourselves to the priests.” And so it was that as they went, they were cleansed. And one of them, when he saw that he was healed, returned, and with a loud voice glorified God, and fell down on his face at His feet, giving Him thanks. And he was a Samaritan. So Jesus answered and said, “Were there not ten cleansed? But where are the nine? Were there not any found who returned to give glory to God except this foreigner? And He said to him, “Arise, go your way. Your faith has made you well.” 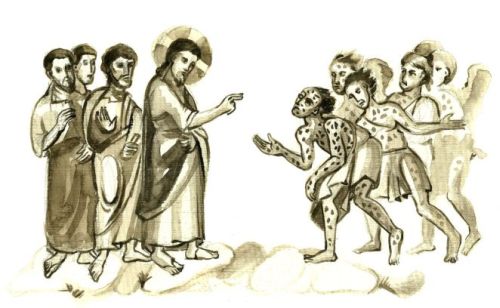 We heard in the reading from the Epistle how we are to give thanksgiving to God for having brought us into this marvelous world. All that we see around us was created for man – both the angelic world, and the visible world, and the invisible world – that he might live, giving thanks to God, and that his entire life might become the same sort of thanksgiving, the same sort of divine service, as the divine service at which we are now present. This is why it is called the Eucharist, which translated from the Greek means “Thanksgiving.” Our life, through the liturgical services, communion with God, and partaking of Christ’s Holy Mysteries, thereby becomes a giving of oneself to God and of thanksgiving to Him.

This is how the Samaritan acted: he brought to God the gift of healing that the Lord had given him, and this was true thanksgiving. When we thank God for something, we must remember very well that the good gift that the Lord has given us becomes good for us when we can give it back to Him in order to use it for service. True thanksgiving is when we, having received a good gift, give thanks, serving Him ceaselessly with this very gift, giving this gift back to Him. By this means all our spiritual gifts are multiplied in us; everything is healed in us that is leprous, distorted, and frozen, that does not belong to the spiritual, because only the Lord can heal us.

We need to understand very well the cost of our prayers, the cost of God’s help, of His good gifts. We receive along with them an enormous responsibility, for every gift of God to man is his judgment. You will recall that in another parable the Lord called three people to Himself and gave each talents: five to one of them, three to another, and one to the final one. In some cases they increased, and in another it decreased. Later the Lord judged each of them according to these good gifts. For those that had increased them, they were increased even more; but the one who had appropriated it said: “This is mine. I do not want to show it to anyone and I do not want to share it with anyone, lest something should suddenly happen. I will use it for myself.” This person will be treated completely differently.

Unfortunately, we often do not understand this. We think that our prayers to God, our desire to receive something essential for life from God, are our own doing and belong to us. We can take that which we asked for from God and say: “How nice that I now have this. I had been leprous and bad, and now I am something else. How nice that I have this, how pleasant it is to live with this.” Unfortunately we live mindlessly like this, but then it turns out that we no longer possess something that we had enjoyed. There was a moment at which we received enlightenment from Christ, but then we parted ways with this light, and it suddenly appears that we have not had it for a long time, that we long ago lost it and have become worse than we were before we met Christ.

We ask ourselves why. For the same reason: because we did not return to give back the extraordinary gifts that the Lord had given us – forgiveness of our sins and the healing of our life. We receive them often without understanding the great mercy that the Lord is showing us; we do not return to thank Him, to serve Him with this gift, but rather try to live with them independently, making use of these gifts for our own lives. And it turns out that we lose them.

This Gospel reading should truly teach us what thankfulness to God is, what service to God is, what our participation in the Eucharist is, because precisely here is where that deep thankfulness is expressed, when we give ourselves to Him, thereby taking Him into ourselves and living with Him. Then our life will be like that of the angels, who live exclusively in thanksgiving to God, exclusively in glorification, and cannot live in any other way, since Divine beauty is so imprinted upon the spiritual world that there could be no other angelic life. Therefore the man who has imprinted this glory of God onto himself can live in no other way than to offer constant thanksgiving to God, that is, constantly giving himself to God to the end.