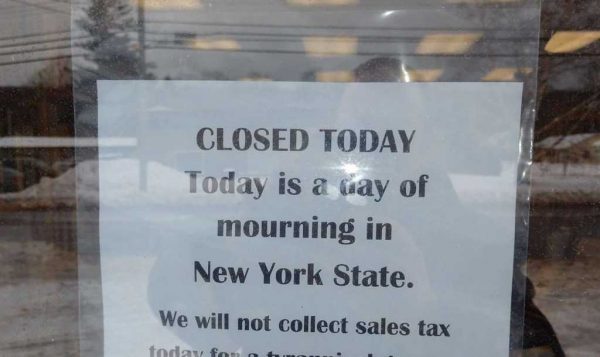 In the wake of the passage of a new law legalizing abortion up until the point of birth in New York state, one bookstore owner has closed his shop to send a message to Democratic legislators and Gov. Andrew Cuomo (D).

Jon Speed, owner of The Book Scout in Syracuse, announced Wednesday he has shuttered his bookstore for the day to mark “a day of mourning in New York” following the passage of the radical bill signed into law Tuesday night by Cuomo.

“I’m pro-life mainly because I’m a Christian,” Speed told Faithwire, “and because I understand that murder is wrong. What I understand from prenatal science is that clearly — and even from what the Bible says — that the baby in the womb is a baby, it’s a human life.”

Speaking of the law itself, known as the Reproductive Health Act, Speed said it essentially nullifies the Clinton-era standard of “safe, legal and rare” because abortion is “certainly not going to be rare” in the liberal state moving forward.

Speed has been on the frontlines of the pro-life movement for several years. He co-produced an anti-abortion documentary a few years ago called “Babies Are Murdered Here” and is currently working on a sequel titled, “Babies Are Still Murdered Here.”

But closing the bookstore, he said, was not a publicity stunt.

The small business owner closed his shop in hopes of sending a message directly to his state legislators and to the governor, a small protest that will keep taxpayer dollars from going to the state government for at least one day.

“I really felt like I needed to do something,” Speed said, recalling the restless night he had Tuesday. “I obviously can’t stop paying sales tax to the state of New York — I can’t do that altogether, although I would like to, but I can’t. So I thought, ‘Well, I’ll put a sign up on the front window of the store and say we’re closed [Wednesday] and express our thoughts on it, just so we can make a statement.’”

He continued, “I can’t change what happened [Tuesday], but I can certainly register my displeasure with it and how upset about it I am.”

Speed said if he were given the opportunity to spend a few minutes with Cuomo and some of the Democratic lawmakers who passed the pro-abortion law, he would first share the Gospel message with them because “changed hearts” is “how we’re gonna win the battle in the pro-life world.”

“I would tell them that they are accountable before God for what they do,” he explained. “They will answer to God. Their job, according to Romans 13, is to terrorize evildoers and support what’s good. Instead, what they’re doing is terrorizing the good and supporting evil.”

The Syracuse resident was referring to Romans 13:4, which states, “But if you do wrong, be afraid, for rulers do not bear the sword for no reason. They are God’s servants, agents of wrath to bring punishment on the wrongdoer.”

Speed said his bold move against the state’s new legislation has received a mixed reception. In Syracuse, he told Faithwire, people are “ticked off” by the day-long closure. But online, Speed revealed, he’s received a “huge response” from pro-lifers around the country.