‘You Can’t Carry 4 to Term’: Mom of Quadruplets Kept Faith in God Despite Doctors Urging Her to Abort 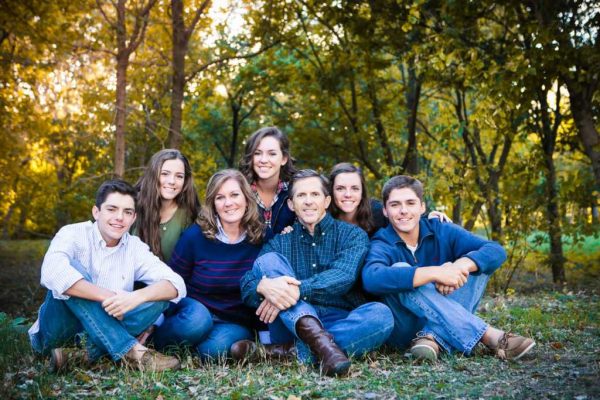 A few years back, as a mother of one, Libby Keen Traylor and her husband, Kent, decided to try for a second baby. Then, to their utter astonishment, Libby found herself pregnant with quadruplets — that’s right — four babies!

“I suffered a miscarriage early on and then went through 3 years of infertility before getting pregnant through IVF,” Traylor told Faithwire. “We had a daughter, Lydia. We got pregnant with the quads through IVF also and they were born 2 years later. So we had 5 kids in 2 years! I won’t say it has all been easy, but we have been blessed with good friends and family to help us.”

“They are great kids,” she said, “beautiful and talented. I do not take for granted their health and God’s faithfulness to our family.”

What was arguably even more staggering than this abundant blessing of children, however, was the pressure exerted upon her by medical professionals to abort at least two of her precious babies.

In a powerful and candid Facebook post, Traylor recalled some of the words spoken over her by the doctors who advised her to terminate:

“There are 4. You can’t carry 4 to term. You need to ‘reduce.’ At least 2 of them. They could all die or you could die. They’ll have brain bleeds, respiratory and digestive problems, cerebral palsy, blindness. You have a 2 year old to think about. And your marriage. Most parents of high multiples end up divorced. It’s not really abortion because you’ll still be pregnant.”

“These are all things my [doctor] told me after finding out we were pregnant with quadruplets,” she noted. “We were filled with so much fear and anxiety.” 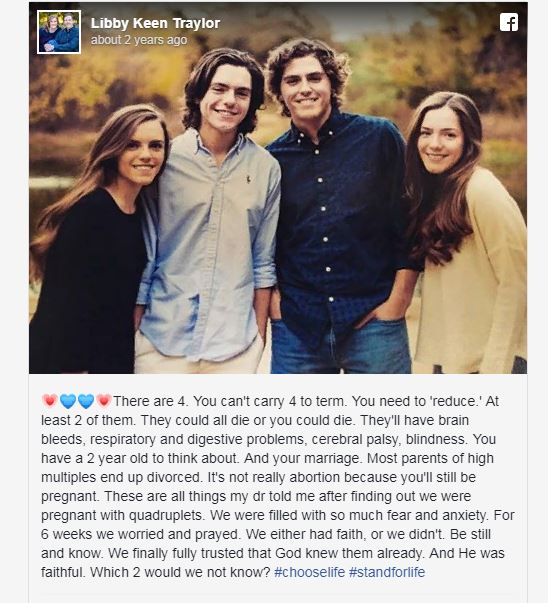 But, as Christians, Traylor and her husband knew that the destruction of these little lives was completely out of the question. Instead, they sought God’s plan through their extraordinary circumstances.

“For 6 weeks we worried and prayed,” she wrote. “We either had faith, or we didn’t. Be still and know. We finally fully trusted that God knew them already. And He was faithful. Which 2 would we not know?”

Unfortunately, thousands upon thousands of people continue to abort their babies out of convenience or despair. In the absence of an optimistic view to the future, and occasionally with a lack of insight into the personhood of their unborn child, many young women feel as if there is no other option but to eliminate the infant life.

“I just don’t think people have enough education about the process,” Libby told Faithwire, adding that a fundamental challenge in the abortion debate is the fierce division that comes from an explosive mix of fear, judgment, and mistruths.

“No one seems to be able to discuss it without getting angry,” Traylor explained. “If you are pro-life, it is assumed you are judging everyone else who decides to abort. And, sadly, there is much judgment. Usually from those who have never had to make the choice and don’t understand is that frightened of the unknown.”

The unabashed pro-lifer noted that those who are pro-choice are also “angrily defending their views,” though she offered up an explanation as to why their attitudes are so iron-clad.

“I firmly believe that their anger is caused by the guilt and pain caused by abortion,” she told Faithwire. “No one talks about the lifelong effects of having an abortion. They desperately defend their choice because they need for it to be OK.”

The latest abortion controversy has arrived in the form of a legislative proposal, approved by New York Senate and signed into law by Gov. Andrew Cuomo, which effectively legalizes abortion up to birth. The shocking late-term abortion bill has re-invigorated the debate over Roe v. Wade and the prospective overturning of this landmark Supreme Court ruling.

There is no doubt that if Roe were reversed and abortion strictly regulated, thousands, even millions more unborn babies would be given a shot at life.

“I would love for Roe v. Wade to be overturned and the decisions to be returned back to the states,” Traylor said. “It might cut down on the number of abortions and some lives would be saved.”

“Other than that I don’t know what the answer is,” she added. “We live in a fallen world and can only pray for forgiveness.”