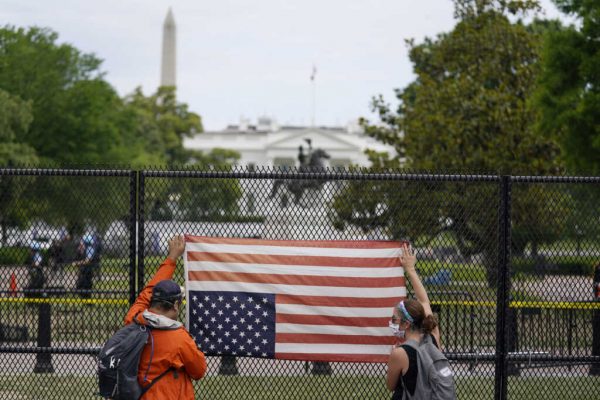 Desert News’ just-released “Faith in America Survey,” conducted by The Marist College Poll, found a stunning 72% of Americans believe “the nation’s moral compass is pointed in the wrong direction.” However, while a majority believe the U.S. is morally adrift, only 40% said they attend religious services at least once or twice a month, and even fewer (35%) said they believe the future of the country is in God’s hands.

“Religious service attendance has continued to trend downward over the past decade, despite over half of Americans saying they believe in God as described in the Bible or pray daily,” Hal Boyd, executive director of Deseret National, explained in a press release provided to CBN’s Faithwire. “With younger age groups less likely to attend religious services than their older counterparts, the downward trend of religious attendance is likely to continue.”

“Though all generations of Americans believe it is necessary to follow the Golden Rule,” he continued, “younger generations are less likely than their older counterparts to believe that being religious is necessary in order to live a moral life. Americans actually find themselves looking to family more often than religious teachings when looking for sources of moral guidance.”

In fact, religious teachings like the Bible and pastoral leaders rank fourth and fifth, respectively, in the list of places Americans are likely to turn to “for guidance on how to live a moral life.”

The survey found a majority of respondents — 79% — will turn first to their families, then to the rule of law (66%), and to their friends (65%). Then, 63% said they consult “religious teachings” for moral guidance, and only 57% said they look to religious leaders where they might worship.

Those data points provide insight into the fact that only 44% of professing Christians believe the future of the United States is “mostly in God’s hands.” Fifty-two percent of believers said it is “mostly in the American people’s control.” Sixty percent of Americans overall said the same.

As with many things, politics certainly factors in here, too.

Republicans (70%) are much more likely than Democrats (28%) and even independents (45%) to believe a person’s political views should be impacted by his or her religious beliefs.

While Americans are certainly politically divided, a slight majority of Americans overall (55%) believe the U.S. Constitution is inspired by God. That percentage rises to 65% among Christians. Interestingly, even 45% of those who don’t practice a religion at all believe the Constitution is God-inspired.

This survey is full of all kinds of observations. It is worth highlighting some of the more practical findings.

A slight majority of Americans (54%) said they believe in God “as described in the Bible.” That percentage, though, shifts dramatically depending upon age. While 69% of Americans ages 60 years and older are most likely to report a belief in the “biblical description of God,” just 50% of those ages 30 to 44 years and only 31% of those ages 18 to 29 believe the same. Additionally, just 20% of the 18-29 age group believe in God as He’s described in Scripture, and 24% said they believe in “a higher power,” but not in the God of the Bible.

However, despite Americans waning belief in the God of the Bible — and a steady decline in church attendance — still a slight majority said they pray daily.

Fifty-three percent said they pray every day, while 22% said they do not pray at all. Sixty-nine percent of Christians reported praying daily and, when broken down along denominational lines, 74% of Protestants and 58% of Catholics said the same.

Fascinatingly, while Americans are split on their views of God, prayer, and morality, a stunning 92% of Americans believe it is “necessary” to follow the so-called Golden Rule, a biblical precept found in Matthew 7:12, which states: “So in everything, do to others what you would have them do to you, for this sums up the Law and the Prophets” (NIV).

Ninety-three percent of those who practice a religion and 91% of those who do not still believe adherence to the Golden Rule is “necessary.”