How to Form Our Lives on the Basis of Faith: On St. Nicholas the Wonderworker

We say that St. Nicholas is a “model of meekness” because he was a “rule of faith.” If one’s life is based on faith, then one’s inner humility and meekness become a natural manifestation of this faith.
Patriarch Kirill of Moscow and All Russia | 19 December 2011 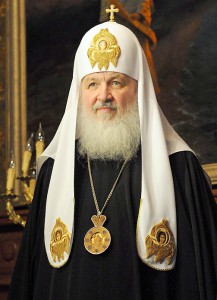 Today our Church solemnly glorifies the memory of St. Nicholas the Wonderworker, Archbishop of Myra in Lycia. St. Nicholas lived at the end of the third and beginning of the fourth centuries. Nearly 1,700 years separate us from him, but the Church has carefully preserved his memory throughout all these centuries because he lived such an extraordinary life, acquiring great power of spirit and drawing so near to God through his ardent faith that God granted him the special power of performing miracles.

The Church’s memory is its Tradition. Having studied history, we know about certain historical events, but think of them rarely; we very often forget what we learned in school or college. This memory is dead, it is no longer alive; it no longer enters the activity of our spiritual powers, it has no continual effect on the human mind. But the memory preserved in the Church, the Tradition of the Church, is a living memory; it is supported and fertilized by the sincere prayer that man raises to those whom he remembers: the holy saints of God.

Our memory of St. Nicholas is so alive that we often turn to him every day, asking his help in our lives. We receive a reply from him: our prayers are answered. He appears to us through his presence in our lives, including through his miraculous and myrrh-streaming relics preserved in the city of Bari, which are profusely covered in fragrant myrrh. This myrrh is collected annually and pilgrims visiting Bari have the possibility of anointing themselves with it. 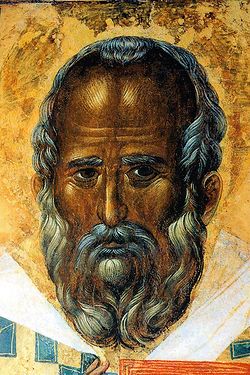 Meekness is a Christian virtue that modern man has a difficult time understanding. After all, one’s worldview is largely shaped by one’s environment, by those standards of thought and ideals and stereotypes that are found within the public consciousness. But in modern society a conception of meekness is lacking, and the practical worldview generated by everyday life all but excludes it. Many today consider that the foundation of success – and many view success as the goal of life – is a constant fight. The world is constructed according to the laws of competition and competitiveness. If within this competitiveness everyone were to strive to show his best side, hurting no one, this would be justifiable, comprehensible, and perhaps even beneficial. More often than not, however, the competitiveness in which we are engaged is accompanied by conflict, a desire to weaken others, to defeat them, and to insure one’s own victory on the basis of their defeat. What room is there here for meekness, given that meekness is nothing other than the manifestation of one’s inner humility? It is expressed externally through one’s lack of irritability, anger, and spite.

One can keep oneself from irritation and restrain the feeling of anger, controlling one’s actions and emotions through an act of will – but this will not be meekness. Meekness derives from an inner condition of spirit, for it is the external manifestation of an inner condition of human humility. This, if you will, is a special philosophy of life – a correct philosophy, a true picture of life, one in which one places oneself in this picture in the best manner. This is a special attitude towards God, towards other people, and towards oneself. In humility one, as it were, cedes one’s central place to God; in humility one discovers one’s own best qualities; in humility one establishes a special relationship with other people, so that this relationship in no way destroys or causes harm to others.

In the end, human humility is a great force; with it, one can reach one’s goals without harming others, without causing them any hurt or damage. Constructing such relationships gives joy and peace, rest and quiet to the heart. One’s conscience is clean: one has hurt no one, tread on no one, cheated no one. How sweet is such a victory, how remarkable such achievements feel when they are realized without any harm to others! It indeed takes a great deal of strength to live one’s life in this way. But if there is a worldview at the basis of our actions, then there is also a defined worldview at the basis of meekness, namely the Christian view of life formed by Christian faith. We say that St. Nicholas is a “model of meekness” because he was a “rule of faith.” If one’s life is based on faith, then one’s inner humility and meekness become a natural manifestation of this faith.

We have just heard the Gospel according to St. Luke containing the Sermon on the Mount. What clear commandments the Lord gives us! If we live according to these commandments, if we preserve the Orthodox faith, not subjecting it to distortion, not introducing any commentaries and corrections arising from human ingenuity into it; if we do not introduce into it any mistakes arising form human sinfulness, but rather preserve it purely, then we will have a solid worldview serving as a basis for constructing a happy, peaceful, and quiet life, in which one’s success does not necessarily entail conflict with others.

St. Nicholas lived by this faith. But it has so happened that there have been attempts since deep antiquity to change, destroy, or introduce a sinful human element into this pure and holy faith, which has Divine revelation – that is, God Himself – as its foundation. The entire history of the Church is a history of struggle for purity of faith, and St. Nicholas was an active fighter for the preservation of the Orthodox faith. He was a participant in the First Ecumenical Council, fighting against the presbyter Arius, a heretic who tried to introduce human philosophical sophistry into the Orthodox Christian faith, which would thereby have destroyed the very foundation of this faith. Arius taught that Christ was not the Son of God, that He was not consubstantial with the Father, and that He was not God, but only a kind of supreme created being. But if Christ is created, then how can salvation be accomplished through His death and Resurrection?

The Arian heresy was intended to destroy the very foundation of the Christian faith. St. Nicholas the Wonderworker, being a rule of this faith, assembled with his brother bishops in 325 in Nicaea, a city in Asia Minor to which bishops from all over the world traveled for the First Ecumenical Council, in order to defend the Orthodox faith; he thereby became an example of how to preserve the treasure of faith so that it can serve as the foundation and norm of our lives.

In order that our lives be formed on the basis of faith, this faith must be pure, uncomplicated, and not obscured by human sophistry. The difficulty lies in the fact that people perceive faith by means of their reason, and our reason, again, is formed under the influence of our environment. Every succeeding generation of people perceives this faith – this same one, holy, pure faith – through the prism of their views and convictions. There is nothing wrong in this, for this is the way man is made: people in the twenty-first century cannot think in the same way that people did in the third or fourth centuries. But, perceiving our faith with the modern mind and through the prism of modern knowledge, we must not destroy this faith by introducing sinful human sophistry.

St. Nicholas the Wonderworker teaches us all this, as do a host of other saints. This all sounds very relevant to us today, for in our vain times many people are incapable of seeing the foundation of their lives, the norm of their being, in the pure faith – that marvelous source of Divine wisdom. Therefore the Church, including its clergy, bears an enormous responsibility to help each succeeding generation of people accept this norm and model of faith and to make it the foundation of their lives.

A theological seminary is located in the monastery in which we are today celebrating this divine service and praying together. Therefore I have a special word for the seminarians, for those who will tomorrow become servants of the Church. I call on you always to remain faithful to that source of Divine wisdom that is revealed to us in our Orthodox faith. I simultaneously call upon you to be capable of communicating to the consciousness of modern people the meaning of the faith in clear, comprehensible, and convincing words, so that the faith not be perceived simply as a legacy from the past, as a part of national tradition and folklore – because faith is, in the first place, the foundational worldview of our lives. If our contemporaries are able to penetrate everything that the Divine word contains, and make it the foundation of their lives, then these lives will indeed become beautiful. Human success, development, and everything that modern civilization offers us can be transfigured, can indeed serve the fullness of human life. Today we pray to St. Nicholas the Wonderworker, that he would enlighten us and help us to build a life full of meekness, spiritual strength, and humility on the immutable rock of the rule of faith. Amen.

Delivered on December 19, 2009, in the Iveron Cathedral of the former Nikolo-Perervinsky Monastery in Moscow.