A Saint of the People 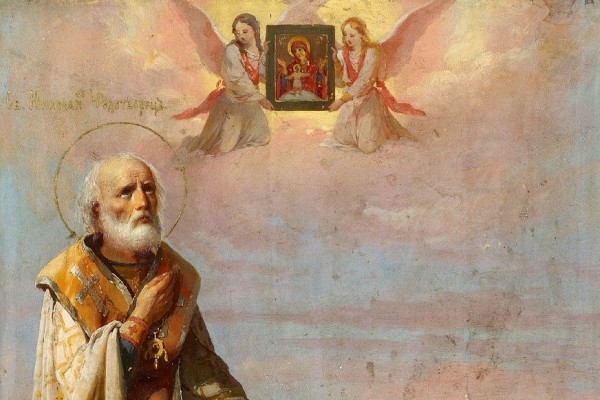 “In truth you revealed yourself to your flock as a rule of faith
An image of humility and teacher of abstinence….” (Troparion for St. Nicholas)

“You revealed yourself, O saint, in Myra as a priest
By giving up your soul for your people….” (Kondakion for St. Nicholas)

“O who loves, Nicholas the saintly?” we sing from a popular hymn to that glorious saint. The answer obviously is the entire Christian world down through the centuries, with various interpretations and understandings related to the era and ethos. He endears himself even for what he was not. Following the age of the apostles, then that of the martyrs before the glorious edict of St. Emperor Constantine the Great making Christianity lawful, while those before his time taught by example how to endure through persecution, St. Nicholas gave posterity to what can be achieved in relative political freedom.

The Church makes it clear that there is no Orthodoxy without a rule and witness to the true faith. St. Nicholas was an icon of humility, the entry to spiritual progress, and the teacher of fasting, the companion of prayer without which certain demons cannot be expelled. [Matthew 17:21] He was not like St. Athanasius or the Cappadocians, known for their theological gifts, nor like St. John Chrysostom for his oratorical skills. “Teacher of abstinence,” but not among the great ascetics such as St. Anthony. He was a priest and a bishop. In every sense a true shepherd who cared more for his flock than for himself. This is what the churches of Jesus Christ through the years, east and west, of various communions, revered in the fourth-century champion of the people. When we look to our clergy for guidance, leadership and witness to Christ, he is what we have in mind. St. Nicholas gave up his soul for his people, just as the apostles and martyrs surrendered their lives as witnesses for the Lord. To “give up his soul” means that he had none of the ego drives that motivate so many people to provide first for themselves and after that perhaps for others. Even if we allow for some exaggeration when the tales relating his mighty deeds had been proclaimed, through the events we discern his challenges to find a way to provide dowries for unmarried maidens without offending the sensitivity of the father, or having the audacity to defy the courts that would accuse a poor man for a murder committed by a person of means. Before he was a bishop, even a Christian, he was a child of God blessed among those in the beatitude as peacemakers, therefore children of God. [Matthew 5:9] The same sort of soul motivated the anonymous and perhaps even mythical “Good Samaritan.” Thank the Creator of our world for having endowed some, many, most and maybe all with the heart, soul and mind of children who act without hesitation to conquer all instincts of self-preservation when an opportunity arises to react on behalf of another creature, human or animal, in need of help, rescue or comfort.

In America of today, we have molded St. Nicholas into a Santa Claus removed from the icon of the Church. Prosperity in our time requires ostentatious displays of wealth, gifts that not all can afford given to those not always grateful simply because “It’s the season.” Santa fills the wishes of a self-indulgent, prosperous culture catering to the economic needs of those who exploit the myth without believing in the Orthodox Christian role model for discovering the real needs of those who shared time and place with him, that shepherd of souls who labored to provide assistance for all who were on the journey through this world and onto the Kingdom of God.