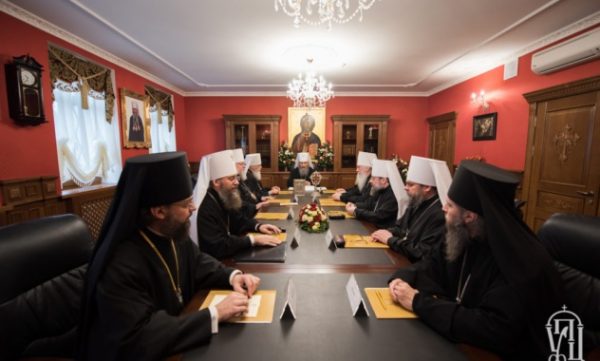 On 14 March 2018, at the Kiev Lavra of the Caves, the Synod of the Ukrainian Orthodox Church held its first session in 2018 under the chairmanship of His Beatitude Metropolitan Onufry of Kiev and All Ukraine.

The members of the Synod expressed their concern over the statement made by the Public Prosecutor’s Office of the Zaporozhye region about the opening of criminal proceedings against several representatives of the Zaporozhye diocese of the Ukrainian Orthodox Church on the grounds that a cleric of this diocese refused to perform a rite for a person who had not been baptized in the Ukrainian Orthodox Church. The Synod noted that these criminal proceedings “are politicized and aimed at interfering in the internal affairs of the Ukrainian Orthodox Church.” Through the actions of the Zaporozhye Public Prosecutor’s Office, “a new scheme of criminal prosecution against a religious community is being introduced on the grounds that it is guided in its activities by the sacred canons and rules, according to which the needs of members of other religious communities are not satisfied in the Church.”

The members of the Synod emphasized that the church sacraments and rites may be performed only for members of the Church, that is, for those who voluntarily received in it the Sacrament of Baptism. Since the representatives of the diocese acted in compliance with the laws of Ukraine and the canons of the Holy Orthodox Church, the criminal proceedings against them are to be closed.

Archimandrite Sergy (Anitsoi) was elected vicar bishop of the diocese of Tulchin with the title of Bishop of Ladyzhin.

Archimandrite Pimen (Voyat) was elected vicar bishop of the diocese of Rovno with the title of Bishop of Dubno.

The participants in the meeting also took some administrative decisions concerning the life of dioceses and monasteries of the Ukrainian Orthodox Church.